Friday Forgotten (or Overlooked) Book: DESTINATION UNKNOWN aka SO MANY STEPS TO DEATH (1954) by Agatha Christie 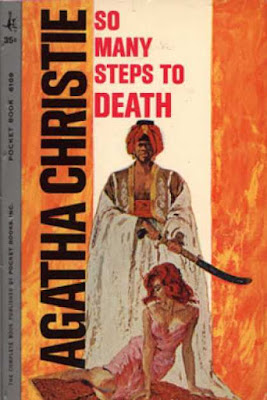 When in doubt, reach for a Christie - words to live by. A quick re-read and all's right with the world again - at least for the moment. (This post is a re-working of a review I did several years ago of a book I never get tired of re-reading, especially when I'm in need of escaping to a more comfortable, more familiar world. And boy, these days do I ever need that.)

Destination Unknown (aka So Many Steps to Death) by Agatha Christie is a stand-alone published in 1954 - the book doesn't feature Miss Marple or Hercule Poirot nor any of the other Christie sleuths. In fact, for the most part this is a thriller though it also has, as a major plot surprise, an element of whodunit thrown in for good measure at the end. Christie was often tricky like that.

Probably not as well known as the titles in the Poirot and Marple canons, but I think this is in many ways, one of Christie's more comforting bests, even if the oh-so-improbable plot requires a larger than average suspension of disbelief. It is in my view, perfect escapist entertainment. The story begins with a sad woman on the verge of suicide and ends with her a heroine no longer sad. Through an extraordinary set of circumstances, she has found the strength to survive.


Hilary Craven is a young, typically subdued British woman who has lost her beloved child to illness and her husband to ennui. As an escape she gets on a plane to Paris, a runaway who discovers almost immediately that you cannot run away from yourself - wherever you are, there you are. Seeing no point to the emptiness of her life, she plans a nice, quite out-of-the-way suicide - wouldn't want to bother anyone back home in England. Christie was not being especially subtle when she named her heroine Craven. Though, in truth, her character's motivation is easy enough to understand.


This quest for oblivion is deduced at a conveniently opportune moment by a shady character named Jessop (of the intelligence service), who picks up on Hilary's intention with no more than an experienced hunch, To watch him reel her into his grand scheme of impersonation (it's her flaming red hair, you see) is a Christie, fairy-tale delight. (Yeah, this is definitely a candidate for my Fairy Tale Crime sub-genre which would also include THE MAN IN THE BROWN SUIT and THEY CAME TO BAGHDAD, both also by Christie.)

As she is lining up some pills, Jessop stealthily breaks into Hilary's hotel room and upsets her immediate plans:


"...You're not interested in life, you don't want to live any longer, you more or less welcome the idea of death?"


"Good," said Jessop, cheerfully. "So now we know where we are. Let's go on to the next step. Has it got to be sleeping pills?"


"Well, I've already told you that they're not as romantic as they sound. Throwing yourself off a building isn't too nice, either. You don't always die at once. And the same applies to falling under a train. What I'm getting at is that there are other ways."


"I don't understand what you mean."


"I'm suggesting another method. Rather a sporting method, really. There's some excitement in it, too. I'll be fair with you. There's just a hundred to one chance that you mightn't die. But I don't believe under the circumstances, that you'd really object by that time."


The gist of the plot: several top-notch scientists have disappeared from their various corners of the world and no one knows where they are - not their governments, families, closest friends or fellow workers. Because of the delicate nature of their scientific specialties, government agencies are naturally concerned. The suspicion is that these learned men and women have gone over to the other side, slipped away behind the Iron Curtain - it was that time in history. If so, there's not much to be done, but if there should be another explanation then...


When Olive Betterton, a young, trim red-headed English woman suspected of being on her way to wherever her husband Tom - a nuclear physicist - is hiding, is badly hurt in a plane crash on the very plane that Hilary Craven would have been on had not the weather forced her connecting flight to detour away from the airport, well then, you kind of know where this is headed. Olive Betterton is pulled barely alive from the wreckage and taken to hospital where all she knows (IF she knows) about Tom Betterton's mysterious disappearance will die with her, unless...


Well, this is an Agatha Christie plot, so you have to expect surprises on top of surprises and boy do you get them here. Such an outlandish plot, but I go along with it every time I re-read the book. I mean, why not? It couldn't happen now, but it could have happened once upon a time...

Hilary Craven is quickly remade into Olive Betterton and sent on her way to join a bunch of disparate travelers, any one of which may or may not be an unknown contact, touring Morocco and other exotic locales. When contact is at last made, it comes in the least expected way and Hillary almost blows it.

Then the circuitous adventure begins. Hillary and certain traveling companions are led away from civilization towards 'a new world.' Their destination? A sinister Utopian society hidden away where no one would ever think of looking.


Terrific book if you're stricken with the doldrums and feel like a strangely comforting tale of spies, murder, travel, an incredible secret hideout, a cold-hearted villain and last, but not least, a bit of romance and a whodunit twist.