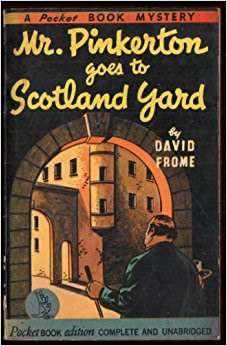 This is my first Mr. Pinkerton book and I was taken, more than anything else, by the title which is the kind of simplistic thing I love. I read a bit on the series and decided to jump right in though I'm not familiar with the author. David Frome is the pseudonym for a prolific writer named Leslie Ford who was really Zenith Brown (1898 - 1983) whose work I have heard of but am not familiar with - Leslie Ford, that is.

At any rate, I got my hands on an old paperback and lo and behold, I've discovered another enjoyable series to wade through when availability and budget permit. And based on the writing talent displayed in this particular whodunit, I will eagerly be looking to read the rest of Zenith Brown's output under the names of both David Frome and Leslie Ford.

In this series, Mr. Pinkerton is a rabbity middle-aged widower whose wife, when she was alive, made life a living hell. Money-wise he is comfortable, thanks to his late wife's parsimony. Upon her death (minus any will), Mr. Pinkerton inherited the boarding house they lived in and quite a bit more money than anyone thought Mrs. Pinkerton possessed. But despite his wife's death, Mr. Pinkerton has not been set free from a life-time of conditioning. He is still inclined to filter his day to day through the prism of his late wife's disapprobation. Old habits are hard to break.

However, the timid Mr. Pinkerton has managed to become involved in ten mysteries (at least that's the number of books in the series) through his friendship with Inspector Bull of Scotland Yard who previously lived in the Pinkerton boarding house. Through this connection, Mr. Pinkerton has been allowed to add the vigor of an occasional murder to an otherwise monotonous life enlivened only by trips to the movies twice a week,

Since so far I've only read this one book in the series, I can't compare it with any others. Here, Inspector Bull does most of the actual detecting and Mr. Pinkerton is pretty much on the sidelines adding his two cents now and then. We are privy to some of his thoughts but it's Bull who's front and center. I'm wondering if this will be true of the other Pinkerton books - at some point I'll find out. Not that I mind it, for surely it makes more sense to have the Scotland Yard man do most of the grunt work. Though sometimes it's Pinkerton who steers him in the right direction.

On the other hand it is a bit odd that Pinkerton is allowed the freedom to accompany Inspector Bull hither and yon as he tracks down nasty killers who often-times wind up trying to kill Mr. Pinkerton as well. In MR. PINKERTON GOES TO SCOTLAND YARD, we come up against a murderer whose weapon of choice is poison, but as usual suspension of disbelief is needed as Bull allows Pinkerton the unusual freedom of hanging around a murder investigation though he has no legal standing.

A month or so after being prompted by a newspaper article to make a bet with Inspector Bull over the probability that there are murders which go undetected by the police as murders, Mr. Pinkerton overhears some unpleasant gossip. An old woman by the name of Mrs. Ripley is likely being poisoned by members of her household. Curiosity gets the better of Mr. Pinkerton and he is moved to discuss what he's heard with the actual doctor on the case. The doctor of course poo-poos this odd little man who pops up out of nowhere to accost him in the street. In truth, Mrs. Ripley is actually better than she's been in days.

But then things abruptly take a turn for the worst.

The wealthy Mrs. Ripley despised her family and they, in turn, despised her. So when she is poisoned there are several ready suspects at hand. Was the killer Evelyn Ripley, the daughter who was at her mother's constant beck and call? Was it her sister Mrs. Cornish, a widow who had previously been banished when she married a man her mother couldn't abide? Was it the younger brother Hugh Ripley who is also inappropriately in love and lacks the funds to do anything about it? Was it Portus Ladysmith, curate of St. Barnabas in the Field, who was in desperate need of funds for his poverty stricken dock-side church? All benefit in some way from the old lady's will.

A second murder upends the police's investigation which had centered on one person being the most likely culprit. Later we get the usual verbalized denouement in a roomful of suspects as all is revealed by Inspector Bull. But not before the long overdo discovery of a third murder heretofore undetected. It takes Bull and Pinkerton most of the book to finally realize that the killer is 'hiding' in plain sight. The motivation for all this killing is weak but workable. I enjoy whodunits and this is a pretty good one even if the reasoning in the end is a bit faulty.

Since this is Friday once again, don't forget to check in at author Patricia Abbott's blog, Pattinase, to see what other forgotten or overlooked books other bloggers are talking about today.