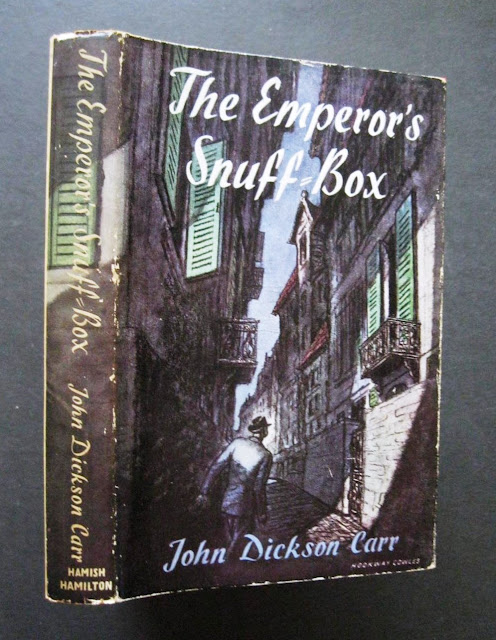 My apologies, I can't remember which of my blogging friends recommended this book - so sad when you're old and decrepit and your memory fails to function. But whoever it was, THANK YOU!!  This is another terrific Carr book. (I recently began re-reading Carr having totally forgotten the books from the first time around.) THE EMPEROR'S SNUFF BOX is so well set up and so smartly written even if the heroine is a bit of a drip whose behavior on an important night defies logic. But so what, we go along because Carr wants us to and because he's a man and what do men know about women anyway. Right? Besides, in those days of long ago, women were expected to be a bit malleable.

You know, there's something about Carr's writing that almost, ALMOST smacks of soap opera, but he does always manage to steer clear and deliver the goods.

THE EMPEROR'S SNUFF BOX is not part of Carr's regular series stuff and does not feature Dr. Gideon Fell or Sir Henry Merrivale. The detecting genius this time out is calm, cool and collected Dr. Dermot Kinross, a psychologist and expert in the criminal mind. The heroine is Eve Neil, she who behaves in very silly fashion, abandoning her common sense when it's needed most. But that is who she is. She also happens to be exceptionally beautiful and rich and will become the main suspect in the murder of her fiancee's father.

The settings are intimate enough, two French villas across from each other - this is the sort of book that would make for a good play since there are few locations and events take place in a short period of time.

At any rate, Ned Atwood is Eve's ex-husband, a man whom she should never have married. He is a handsome and charismatic n'er do well who treated Eve badly yet claims to still love her. We learn early on that he was capable of more than just verbal abuse during the marriage - a thoroughly bad lot as they used to say, but the sort to which certain women gravitate. Hey, he has curly blond hair.

Meanwhile, the Lawes family lives in a corresponding villa across the street from Eve and she has recently become engaged to Toby Lawes, the upright, uptight son of the family. He appears to be everything that Ned is not - he works for a stodgy bank who will brook no scandal in their employees' lives and he worships Eve.

When Ned reads about the engagement, he uses his old key and shows up one fateful night in Eve's bedroom determined to convince her not to marry the stiff shirt across the way.

Anyway, while trying to convince the persistent Ned to leave her bedroom before scandal ensues - they eventually discover that all is not as it should be across the street. Looking directly into the third floor study, they can see that Maurice Lawes, Toby's elderly father, is slumped at his desk with his head smashed in.

What follows is one of those stories where things just get worse and worse. Of course, everybody's lying and things better left unsaid get said and secrets are exposed and everything that happens looks suspicious and for sure the police zero in on Eve because of what happens shortly after she forcefully ushers Ned out of her house and into the darkened garden. Oh, and there's a sinister maid named Yvette which I found very funny. Lately I seem to be running into characters named Yvette all over the place. This Yvette is not above lying and  making things very difficult for her employer.

I admit that I figured out who the killer probably was early on, but that's only because I've read a million mysteries (or just about) in my life and I've learned to recognize certain tip-offs - this is a fair play sort of thing so the clues are there. I figured out the 'trick' and felt pretty good about it. But even then, I wasn't sure until nearly the end. I also didn't like that the motive is kind of forced and out of left field, but that's a minor quibble since everything else works beautifully.

If you are new to mysteries (or just new to Carr) this would be a terrific book to begin with because it contains the dazzling sleight of hand Golden Agers Carr and Agatha Christie were famous for and it provides as good a surprise ending as those uninitiated among you could wish for.

Lots of fun to read. So far I'm doing very well with Carr.

Since it's Friday, don't forget to head on over to author Patricia Abbott's blog, Pattinase, to see what other forgotten or overlooked books other bloggers are talking about today. 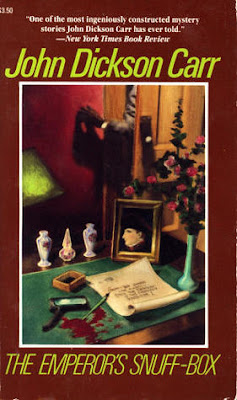 This is the cover on the paperback I have.  But I much prefer the older hardcover edition.