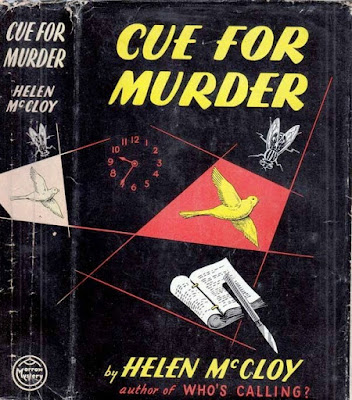 Considering that this book was published in 1942, it's a bit disconcerting to note that there are young men in the cast of characters who are not in uniform. But perhaps the manuscript was written before Pearl Harbor (the story is set in New York's theater community). Or maybe it was mentioned and I missed it, at any rate:

This is an excellent whodunit by a writer I'd never heard of much less read until now. (If I'm not mistaken, McCloy was recently recommended by a blogging friend whose name (as usual) escapes me at the moment. My paperback copy has an introduction by Anthony Boucher, the brilliant and influential mystery maven author and editor for whom the annual Bouchercon convention of mystery buffs and writers is named. He prized McCloy's talents and champions the fair-minded set of clues the author lays before the reader.

As some of you know, I am less interested in fair-minded clues laid before me than I am in being stumped and intrigued by a clever plot and wonderful writing. And oh yes, I must like (and/or find interesting) the main detective, amateur or otherwise. In this particular case, I wasn't bowled over by Basil Willing, psychologist/sleuth and police help-mate, but I love his name so much that I am willing to overlook the fact that he isn't a very vivid presence in this particular book (the only McCloy book I've read so far). He's okay in the role, but I'll have to read more before I make a final decision.


"BURGLER FREES BIRD
New York, April 28 - Police are puzzled by the odd behavior of a burglar who broke into Marcus Lazarus' knife-grinding shop near West 44th Street shortly before dawn yesterday. Nothing was stolen but the intruder opened the cage of Lazarus' pet canary and set the bird free. The shop is hardly more than a shack in an alley leading to the stage door of the Royalty Theater."

A new production of an old chestnut ('Fedora' by Victorien Sardou) starring vivid with a vengeance actress Wanda Morley gets more publicity than the leading lady (or anyone else) bargained for when one of the actors is murdered on stage at the Royalty theater on opening night. Don't you love when that happens?

Only one of the few characters in a particular scene could have bumped off the actor who (coincidentally) had the part of someone pretending to be dead. Oh. the irony.

Basil Willing, psychologist and medical assistant to the District Attorney's office, shows up on the case, brought in by the entreaties of the young costume designer and her friend (and ex-fiance) the male lead in the show who was apparently panting after the leading lady, a known home-wrecker. Turns out the dead guy was Wanda Morley's latest married fling and Pauline the costume designer believes the police are ready to arrest Rodney Tait, said lead in the show. Motive: jealousy. But Rod says he was most definitely NOT in love with Wanda and that it was she who was chasing him and making his life miserable.

Oh by the way, Basil Willing had been at that opening night and so was already familiar with the case and with the suspicious circumstance of the black caped person climbing up the theater's dark and shadowy fire escape.

There are tons of clues in this fair play mystery and if the reader is as finely attuned to the quirks of human psychology as is Basil Willing, then the murderer will be evident to the reader shortly after a certain fact becomes known about midway through the book.

The two main clues are the freed canary and the odd behavior of a house fly. Though head scratchingly esoteric, it is all explained in the end, remembering that psychologists don't think like the rest of us.

There are, of course, red herrings and the clue of the underlined paragraph in a script which I suppose makes some sort of sense - yet on the whole, it all works together. THOUGH, I must say that the motivation is as old as time but for all the distracting murder mystery finessing and the remarkable luck of the killer who gets away (at least for awhile) with murder twice over on the same character if not the same actor.

Nothing is memorable here except for the canary clue and maybe the fun of the backstage comings and goings, but still I thought this was quite a good example of a tricky whodunit from a lesser known Golden Age author. I will be reading more of her work.

Since it's Friday, don't forget to check in at Todd Mason's blog, Sweet Freedom - Todd is doing hosting duties this week for author Patricia Abbott - to see what other forgotten or overlooked books other bloggers are talking about today.