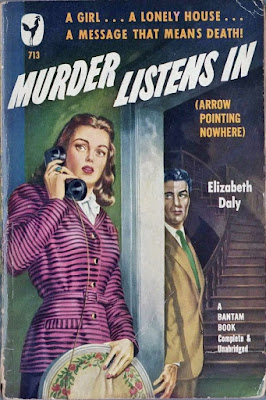 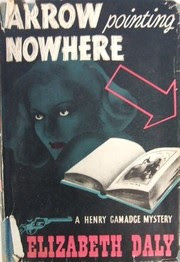 I'd read a Henry Gamadge book quite a while back but it was not nearly as intriguing or as engaging a mystery as this one. ARROW POINTING NOWHERE (aka MURDER LISTENS IN) despite one of its titles, has nothing to do with archery and all to do with a cunning mystery, murder and family obfuscation - what could be better?

Henry Gamadge is an author/dealer/sleuth currently doing secret work for the War Department and so you'd think he's be fascinating in and of himself, but unfortunately as created by Elizabeth Daly, he has little personality and almost nothing memorable about him (though there are some who find him charming). But this particular book still makes for an excellent mystery and fascinating puzzle highlighting human behavior at its most bizarre. I read it in large gulps of anticipation. My favorite way to read a mystery.

It occurs to me to interrupt myself at this moment and mention that memorable sleuth protagonists are quite difficult to create without giving way to satire or copycat embellishment.  Lately I've read several mysteries where that the main guy or gal remained a kind of cardboard dud for the entire book. It's quite obvious that Agatha Christie and  Ngaio Marsh and John Dickson Carr and even Ellery Queen and all the other Golden Agers who were capable of fashioning vivid detectives, amateur or otherwise, must have had a quite separate ability for creating interesting sleuths who immediately spring to life. It's funny how some authors can bring most of their characters to life, but leave their main protagonist completely draped in blandness.

But back to the current book:

When Henry Gamadge gets a secret (and very nebulous) message handed him by a rather intelligent and observant mail man, he must find a way to get invited to the house of people he doesn't know. Time seems to be of the essence.  So thinking quickly and with the aid of a book dealing connection, he is able to affect an entrance to the Manhattan mansion of Blake Fenway, head of a reclusive family of wealthy New Yorkers.

To Gamadge, the secret 'message' means someone in that very private house needs help of some sort and has chosen a rather odd way of requesting it. (I might have had a bit of trouble making the initial connection, but Gamadge tumbles to it almost instantly.)

Having cleverly gained entrance to the Fenway mansion, home of a family that reviles publicity and shuns the limelight, Gamadge meets several of the Fenways (after first scoping out the land while lurking in the shadows the night before) and soon he believes he knows who sent the message and why that person could not have contacted him in the normal way.

While at tea, Gamadge observes the residents of Fenway House with a keen eye. They are:

Head of the family Blake Fenway, a book collector and a very likable chap. Unmarried, the Fenway name will come to an end with him.

Caroline Fenway, unsettled but pragmatic daughter of the house.

Belle Fenway a widow and Blake's sister-in-law - an invalid in a wheelchair since an injury aboard ship while fleeing from the war in Europe.

Belle's son, Alden, a grown man with the mind of a five year old boy.

Craddock, Alden's 'keeper' whose job it is to watch out for the unfortunate man/boy and keep him out of trouble.

Mott Fenway, a penniless older cousin beloved by most.

And of course, the servants.

Not living at the mansion at the moment but very involved in the story-line is Hilda Grove, Miss Grove's niece, a wide-eyed innocent who has been sent up to Fenbrook, the Fenway country house to do some research among family records. Craddock, who is himself penniless, has a tenderness for young Hilda thought Blake Fenway is uneasy about it.

How all these disparate characters figure in the ever-expanding investigation is a mystery which little by little, Gamadge manages to piece together despite two giant red herrings placed in our path almost from the getgo. Much of Gamade's deductive reasoning is arrived at without much explanation, so you have might have to stop for a moment now and then and say, "Wait - what?" I did.

After Gamadge's first introduction to the family, he is taken aside by cousin Mott who attempts to explain the root of the obvious family tensions. He sets up a second meeing but the very next day someone pushes poor Mott out an upper window. And through some rather fanciful putting together of two and two making four, Gamadge realizes that Hilda Grove may be in danger.

But when the second murder occurs, it is not Hilda who is found dead.

From strange beginning to even stranger end, this is a fine mystery worth looking for. I found it by accident when someone recommended Elizabeth Daly and I was reminded that I'd meant to read another. Even though I hadn't much liked the first one I'd read - I occasionally like to give these things a second or even a third chance. I do enjoy mysteries set among upper crust families, dead bodies turning up in a large mansions - the incongruity of it all. Additionally I will say that this story despite some familiar devices, features an unique twist which I don't remember having ever encountered before. I'd say even if you've been disappointed by a previous Elizabeth Daly book, forget about it and pick up this one.