Forgotten (or Overlooked) Book: MYSTERY IN THE CHANNEL (1931) by Freeman Wills Crofts 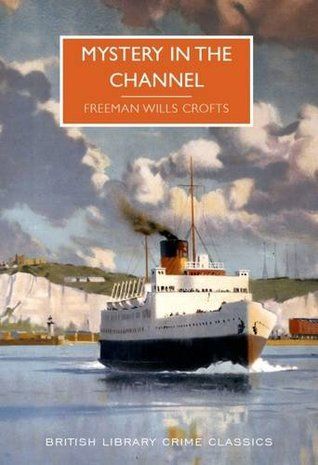 Thank you British Library Crime Classics and here in this country Poisoned Pen Press, for making lesser known writers of the Golden Age of Crime readily available. Not all the books are of equal quality of course, but the main idea gets an A+ for effort - especially for the trade paperback format featuring such gorgeous cover art and design.

Years ago I read many Freeman Wills Crofts books and then promptly forgot them. (Hey, I also forgot all my John Dickson Carr reading as well, so it's not a selective thing at all.) The only thing I do remember was loving Croft's railroad mysteries - especially all the arcane minutiae. I had more tolerance for written detail then than I do now. Though if the detail is intriguing in some quirky way or other, I can still be brought to attention.

This enjoyable book is strictly a police procedural (as are most of Croft's books involving the always dogged and reliable Inspector French) which many of us are fond of though some of us are not. When done well, I believe they are wonderful, I love 'em. There's just something soothing about reading this sort of thing while your mind takes a break from grappling with Big Ideas.

In MYSTERY IN THE CHANNEL, it's the English channel (as you might have guessed) and the details of boating/shipping/sea-faring take the place of railway minutiae. In fact the actual murders take place aboard a luxury yacht.

While crossing from Newhaven to Dieppe, an apparently dead body is spotted on the deck of a yacht by the captain of the Chichester, a passing steamer. When crew go aboard the yacht they discover a second dead man in the cabin below and no one else on board. Both victims have been shot. The weapon too is missing.

So begins this carefully detailed murder yarn by the acknowledged master of this sort of thing. If two murders on board an otherwise empty boat in the English channel don't intrigue you from the getgo, then go read another book. I was caught up instantly.

We soon learn that the two dead men are the chairman and vice-Chairman of Moxon General Securities, one of the largest and more important financial firms in Great Britain. Uh-oh. It is 1931 and the country is already reeling from economic woes - Moxon itself, unknown to its investors, has been in serious trouble for weeks. The once thriving firm will crash almost as the two bodies are being discovered in the channel. What's more, the chief accountant of Moxon's is missing as is another member of the firm. The financial ruin of thousands of investors (many of them small and dependent) is guaranteed as the firm has losses amounting to 8 million pounds and to make matters even worse, one and a half million pounds in cash is missing.

Scotland Yard, in the form of Inspector French, is almost immediately on the job.

Here the seemingly indefatigable Inspector travels back and forth between France and England - a bloodhound on the trail of the smallest lead, unwilling to rest until the culprit or culprits are caught. The author's talent for description is here finely tuned as he makes written images that plant us firmly in place. He's not much for character finesse and description but he makes sure we know where we are.

An aside: Mrs. French is mentioned once in passing, though French seemingly lives alone in an apartment in London and the missus is nowhere to be seen. (She shows up as background in some of the other books.) I took it as a slight mistake on Croft's part. If he'd had the missus hidden away in a house in the country don't you think French might have mentioned it?

At any rate, over at the foundering Moxon General Securities, the account books are being minutely looked over by what we would today call a forensic accountant, hoping to grasp how the current disaster came about. Turns out that the firm really was in grave cash flow difficulty and the defection of the key management team was apparently a desperate last ditch effort to save their own skins while leaving behind investors to face utter ruin.

With the help of the very accommodating French police, the Inspector runs himself ragged following several trails which eventually peter out. An arrest is made, but soon turns to nothing. After much keen-eyed concentration on time schedules and how many knots a boat can do in so many given minutes, French will eventually get to the bottom of things and catch (at great risk to himself) a cold-blooded and extremely clever killer hidden in plain sight.

This is a particularly engaging Croft book, possibly because of the various settings. It's made me want to read more tales with French in charge. Croft is too often overlooked when it comes to the Golden Agers and it's really a shame. He was an expert practitioner at a fairly specific sort of exercise, the likes of which I find rewarding and enjoyable.

Todd Mason is doing hosting duties this week at his blog, Sweet Freedom. Don't forget to check in and see what other forgotten (or overlooked) book other bloggers are talking about today.
Posted by Yvette at 12:30 AM