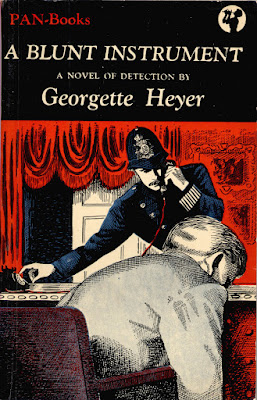 Georgette Heyer, as most of you know, is the anointed queen of Regency Romance (though several of her books take place a bit earlier towards the end of the Georgian period). I've talked about her often enough since I am a slavish fan-girl. Heyer's brilliance, elegance, wit and charm and her often laugh out loud humor just cannot be duplicated. She combines all that and more in her best Regency books which I am given to re-reading when I'm down in the dumps.

But Heyer also wrote a bunch of mysteries which rival the Golden Age distinction of Agatha Christie and the rest of the talented dames who glorified the country house murder genre I love so much.

While not as lavishly enhanced with wit, charm and humor as her Regencies, Heyer's mysteries are, nevertheless, worth finding and reading because at heart, they are excellent whodunits in the British Golden Age style. And if you love that very particular sort of writing and tomfoolery, you will love these.

A BLUNT INSTRUMENT begins typically:  a bludgeoned body slumped over a desk in a study. The local bobby, a bible quoting misery named Glass, is on the scene from the first page on (in fact he provides part of the timeline), and soon it's up to Superintendent Hannasyde and his henchman, Sgt. Hemingway. (Heyer, I note, has a thing for the letter H - see further evidence in her other whodunits.)

The dead man, of course, is more than at first appears and several convenient suspects are immediately in the running for head murderer. One is a devilishly waggish nephew, Neville Fletcher - the heir apparent -  and the other is Helen North, the loathe-to-tell-the-truth wife of a man who handily enough is away from home at the time of the murder. Or is he?

It seems that the aforementioned wife was terrified of having her hubby (they are currently estranged) finding out that the dead man, Ernest Fletcher, had in his wall safe, a clutch of I.O.U. gambling vouchers belonging to Mrs. North. Mr. North frowns on that sort of thing.

Then there is Mrs. North's pragmatically inclined sister Sally Drew, (she wears a monocle and chain smokes - well, I tell you, it's 1938 after all). Sally is a mystery writer and is naturally enough intrigued when a real murder lands, as it were, on her doorstep.

There are also a couple of  men (obviously fond of calling on potential murder victims late at night) of the lower sort who were apparently up to something or other with the dead man.

There are motives galore, much mis-direction (the whereabouts of the weapon for one) and a long ago suicide to be factored in, but I suspect that experienced readers of mysteries will figure out whodunit before the last page, but still continue reading just to see how Hannasyde and Hemingway finally get to the truth of the matter.

I've been re-reading Heyer's mysteries lately and enjoying them again and again. (Thanks to old lady memory, my re-readings are often almost the same as if I were reading the book for the first time.) I also have several in audio versions which are very well done and fun to listen to. (Most especially THE UNFINISHED CLUE read by Clifford Norgate, a narrator I wish had done more of Heyer's books. Though he did narrate Heyer's Regency tale, FREDERICA, quite fabulously.)

During these days of wretched political strife and horrendous doings around the world, I am so very grateful for my favorite books - how they help soothe my often frazzled nerves. There is just nothing like re-visiting the wonderful worlds created by certain authors. Thank goodness.

Since it's Friday, we once again turn to author Patricia Abbott's blog, Pattinase, to see what other forgotten or overlooked books other bloggers are talking about today.