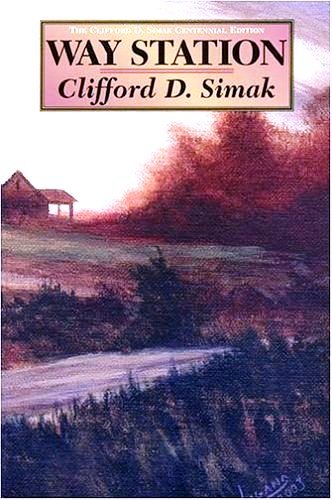 I am a fan of science fiction super-wonder Connie Willis and I loved SLEEPING GIANTS (though not the second book in the trilogy which I found unreadable) by Sylvain Neuvel and THE FOLD by Peter Clines and THE LAST POLICEMAN trilogy which despite its starkly dystopian outlook is still mesmerizing and last but not least, I also enjoyed Stephen King's 11/22/63. I also like China Mieville's work though I think he is more a magical realism guy than a science fiction guy.

Despite this, I'm not much of a regular science fiction reader and know little about the stars of the genre and their bibliographies. I am not especially taken with plots filled with aliens and the inherent bizarre drama of other worlds except, actually, in movie form. But having said that, I'm not immune to a good book with an intriguing storyline either.

So when WAY STATION was recently made available on Kindle, I decided why not? I liked the overall plot idea and decided this would be my first Clifford D. Simak experience.

The book is an abundance of riches almost too much to take in at one reading. While the story is not difficult or full of exotic alien science too convoluted to follow or even imagine, there is still much to consider. The ambience of WAY STATION - despite some violence - has a certain gentleness while at the same time the plot dazzles with ideas.

Enoch Wallace is a modern day recluse. He is an American Civil War veteran who lives in a cabin in the woods which, unbeknownst to his mid-western neighbors, harbors alien teleportation machinery. He is immortal so long as he stays put in the impregnable cabin (and only goes outside for short periods of time) and continues his work which is that of earth's only caretaker of an intergalactic way station. As they planet hop from one deep space locality to another, alien travelers use earth as a sort of pit stop.

'Traveling' is a bit of a misnomer, since the creatures doing said 'traveling' don't actually make the journey - his or her outer shell dies at the point of origin and it is the 'travelers' data which is collected and teleported to the next destination then reassembled in original form.This isn't gone into in much detail, but it would seem a good way to disregard the actual logistics of light years long space travel. If you don't mind being dead and 'reborn' and being dead and 'reborn' as you move around space. Obviously one questions the very idea of the soul's purpose in these re-configured life forms - does it survive the teleportation or did it not exist in the first place?

It is a lonely existence as aliens move on from the way station never really staying long - occasionally one makes a connection with Enoch, but most don't. To them, he is just a caretaker, a necessary fixture. Once in a while, his old friend Ulysses drops by to chat and/or check on things and make sure everything is running smoothly. This is the alien who back in the 19th century chose Enoch to be the keeper of the way station. (Ulysses is the name Enoch gave him.)

Sometimes the alien travelers leave artifacts from their home worlds for the caretaker (with or without explanation as to what the artifact does). Though Enoch has made it his business to learn a few of the interstellar dialects, he can't be expected to know them all. Grateful for these 'souvenirs,' Enoch keeps his singular collection about him - items of wonder and intellectual surmise.

Earthlings are unaware of the way station and of Enoch's immortality, though his neighbors do notice that he never seems to age. Only the postman, Winslow, has an inkling. He's one of the very few humans Enoch interacts with.

Okay, so that's the basic set-up - I would have been happy just to read more and more about Enoch's duties and the aliens which he meets. But this book was first published in two parts in Galaxy Magazine in 1963 and maybe that's the reason for all the plot twists and turns - enough to fill up five volumes let alone two. It's almost as if the author couldn't decide what to leave out so he didn't.

A random sample of what goes on:

There are two invisible-to-everyone-but-himself 'friends' - a man and woman - who show up now and then when Enoch is especially worried or lonely - 'fairies or wraiths' he has conjured up with the help of an artifact. But to his chagrin, the lonely Enoch has fallen in love with the image of the woman and she with him, though their 'romance' is not to be - he cannot touch her and she cannot touch him. This plot line could have been left out of the book and none the wiser - it really doesn't add much to the story.

In addition there's a deaf young sprite of a girl who lives on the farm down the road with an abusive father and ignorant relations. She is known to keep to herself and Enoch has often seen her work small wonders - watched her heal a butterfly whose wing was crushed. For her 'other-wordliness' she is misunderstood and abused by her family. Enoch seems to be the only person she trusts instinctively.

Then there's the 'shooting rage' which Enoch goes to when he needs target practice - a hologram world which has been set up for him by the aliens who run the way station so that Enoch can practice his rifle skills by killing alien monsters on alien worlds.

Also there's a government agent who is lurking about in town at the moment, incognito. He is investigating Enoch and reporting back to Washington.

There is so much packed into this book that you can't figure out what's what until nearly the end when a large rat from outer space shows up at the way station and runs off into the night. Enoch has to go in pursuit since the rat has, in his hairy clutches, a mystical object which prevents war and benefits all lifeforms who are attuned to it. It is an object of reverence which has been lost for generations and for which Ulysses and his federation cohorts have been searching all over the galaxy for years.

And oh by the way, a few days before, Ulysses had dropped by to inform Enoch that he was in some danger of having the way station shut down because of an ancient alien custom which Enoch has unwittingly ignored and which he must now set to rights.

Not to mention, that the townspeople are being whipped into a frenzy by the deaf girl's father and plan to attack the cabin.

LOTS to think about in this story, lots to absorb, lots for the imagination to take in. As I said, more than enough for many books - possibly a trilogy. Well, still, WAY STATION won the Hugo Award in 1964. So I must be in the minority.

But in truth, I enjoyed the book for its old fashioned sense of right and wrong and the whole idea of morality and honor under pressure. I liked how several plot lines do resolve themselves in the end and most of all, I liked Enoch Wallace. Ulysses made a wise choice when he picked this earthling to man the way station.