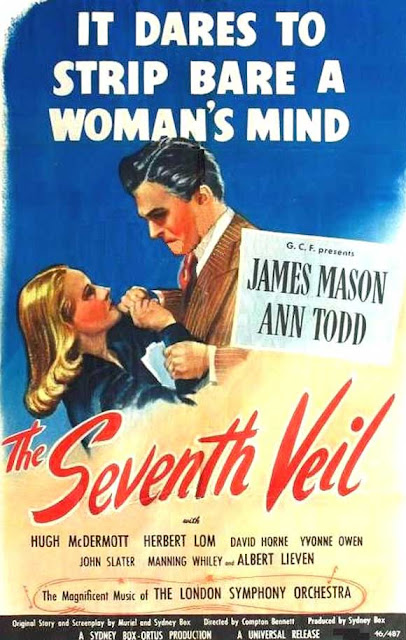 THE SEVENTH VEIL is one of those films from my movie-crazed youth that, for whatever reason, has fascinated me over the years. The last time I can remember watching it on television I was likely an impressionable teen hooked on local TV. Channel 11's Million Dollar Movie was a favorite (they repeated the movie during the week so if you missed it the first time...) or maybe it was Channel 9 or CBS's evenings of movie magic back when N,Y. TV stations had hours of airtime to fill and did so as cheaply as possible with movies, movies, movies. (CBS even had a daily afternoon movie at 4:30!) All for just the price of a clunky black and white television set made in America and meant to last for years and years (no upgrade needed) and did.

Out of the blue, I was recently able to watch THE SEVENTH VEIL on youtube where it is currently (but who knows for how long) available.  I wish I could say that I was instantly transported back in time, but I wasn't. Admittedly, this was a very influential film for an imaginative girl growing up on the lower east side of Manhattan in the 1950's, but the thrill is gone. I'm too old and cynical now to fall under the spell of thwarted love. Sad.

The film stars James Mason, Ann Todd, Hugh McDermott and Herbert Lom, and is based on a screenplay by Muriel and Sydney Box (Oscar winners for Original Screenplay) and directed in histrionic 'woman's film' style by Compton Bennett,

In a nutshell: THE SEVENTH VEIL is a dark and laborious tale of destructive love and pathology, but with a happy ending. I kid you not.

Even if the tale does begin with a suicide attempt.

The poster's dramatic tag line: 'It dares to strip bare a woman's mind,' refers, I suppose, to the fact that most of the film is told in flashback as the beleaguered heroine is treated by a sympathetic psychiatrist (Herbert Lom). He believes strongly in hypnotism and the idea that once you remember everything bad you will come out the other end, cured and ready to tackle a new day. 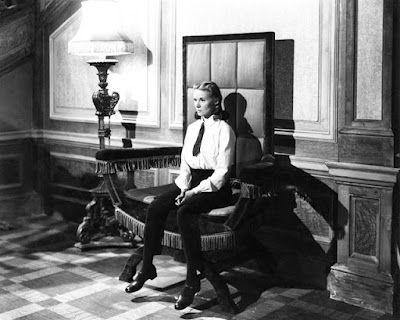 It's obvious they made that chair too big to try and make Ann Todd look smaller/younger and vulnerable.

Okay so here we have Ann Todd who must play a fifteen year old near the beginning of the film (you sort of have to squint not to see she's too old) and then watch as she ages into an attractive woman in her twenties under the dark brow of her cousin, a controlling, chillingly censorious and very much given to brooding, guardian played by James Mason. Of course he's rich and lives in a large and charmless mansion. Typically: he has a cane and limps which romantically hints at some long ago secret hardship AND he always wears a suit and tie even when just sitting around petting his cat. 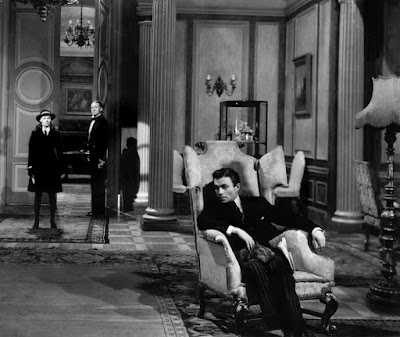 Piano prodigy Francesca Cunningham (Ann Todd) arrives on her guardian's doorstep while still a schoolgirl. James Mason can be menacing without hardly batting an eye when he wants to be which is usually all the time. Once he realizes how musically talented Francesca is, he becomes hell-bent on fashioning the introverted girl into a world-renown pianist and to that end forbids her to have any fun. Everyday it's practice, practice, practice amid lots of scowling intimidation. 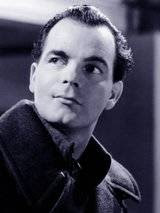 Hugh McDermott, an actor with a light-hearted personal charm and the sort of look men in the 1950s had in real life.

When Francesca does get a few moments on her own she naturally enough seeks out smiling young people. One night she meets a likable night club musician, Peter Gay, played by the usually-looks-older- than-he's-supposed-to-be-actor, Hugh McDermott. (He was unconvincing as a college 'boy' in PIMPERNEL SMITH mainly because he looked about the same age as his professor, Leslie Howard. But that's a story for another day.) Peter is smitten with Francesca and she with him and soon they plan to marry though she is still underage. Uh-oh.

Nicolas will not take this well. 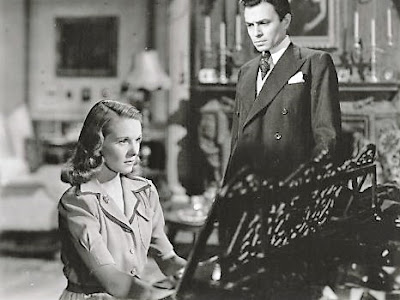 I suppose we have Jane Eyre (and/or Harlequin Romances) to thank for our affection for these sorts of heroes and stories. Because of course we know all along that Nicholas, the dark and brooding villain of the piece is crushingly possessive of Francesca for one reason and one reason only - he is in love with her and has no other way to show it except to try and control her every breathing moment. I know, I know, how 19th century-ish, but this is the sort of thing that made me swoon back in the day.

As a teenager I saw James Mason as the poor misunderstood long-suffering hero. It hardly occurred to me that perhaps he could have behaved a little nicer. But aren't dark, soulful, brooding men supposed to behave this way? Hey, that's what I learned from books. 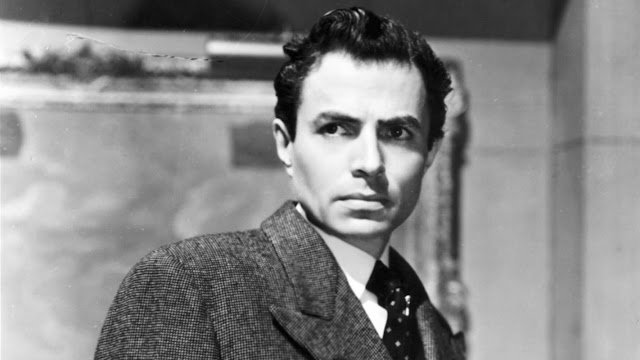 What do those darkly intense stares really mean?

But the truth is, Francesca is such a wimp that you almost don't feel sorry for her as the story progresses because she seems the sort to warrant intimidation. Do I still feel that way today? Well, to be honest, yeah. On re-watching this film it is perfectly obvious that Francesca should have stood up for herself more and not allowed herself to be so easily manipulated. Though naturally, Nicolas being her guardian, he had the law all on his side. Back then it was much easier to lord it over women. 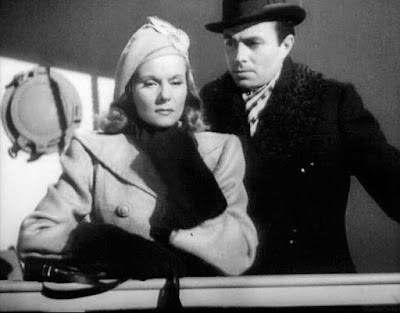 Forget Peter, he's nothing but a two-bit musician - you are an artiste.

So as I mentioned, Francesca and Peter begin making marriage plans. But first she has to tell Nicholas. It doesn't go well. her guardian won't hear of it. He swoops up his ward and bundles her off on a Mediterranean sea voyage to soak up culture and atmosphere in between more bouts of practice, practice, practice. She doesn't even get a chance to say goodbye to Peter. (Though you'd think she could write a letter.) 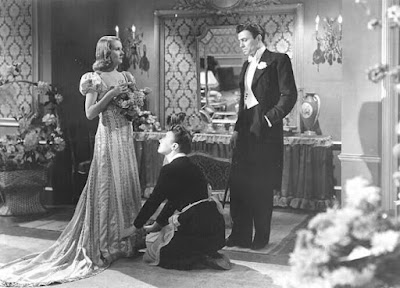 Go out there and knock 'em dead - or words to that effect.

When as long last she makes her concert debut, Francesca performs brilliantly. But thanks to a long ago and rather vulgar schoolmate in the audience who reawakens memories of a violent school episode, Francesca faints after the concert right there in full view of the cheering audience. It's not easy being a sensitive soulful female. Genius, as we know, is often an unfair burden.

Once back at the house in London, Francesca goes to look up the man she abandoned, Peter Gay. But she finds to her dismay that he's since married. (A very moving scene - once they meet again for the first time - well handled with no dialogue.) Francesca flees in the night. 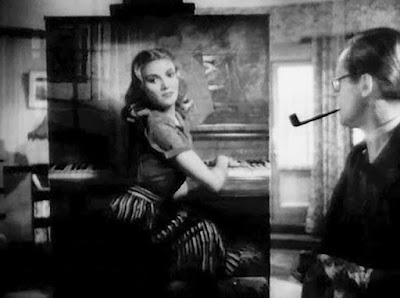 Couldn't they have fashioned a better portrait of their leading lady?

Later Nicholas hires artist Maxwell Leyden (Albert Lieven) to paint Francesca's portrait and of course the artist falls in love with his subject. Never mind that the eventual portrait looks nothing like Francesca. Once again, Francesca and Nicholas have it out over another man.  This time the man in question wants Francesca to come and live with him in typical bohemian artist fashion. Though Francesca assumes they'll be married at some point. Nicholas is so outraged that he slams his cane down on the piano keys just missing Francesca's hands by a millimeter. 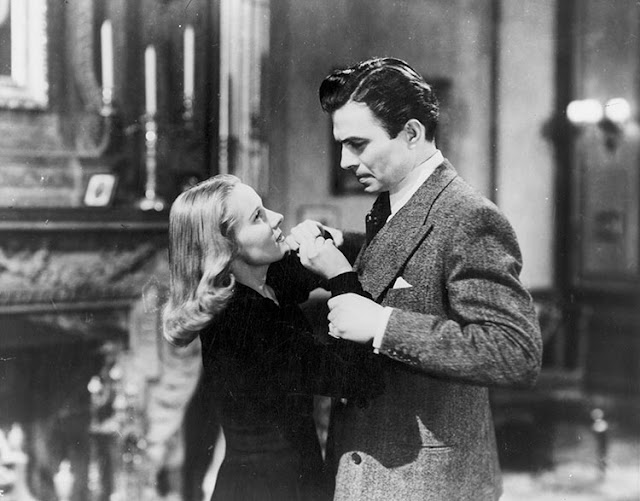 The way to a woman's heart back in the day.

Traumatized, Francesca runs away into the night.  I think this is when she jumps off a bridge into the Thames river and is saved by a London bobby - or actually, I think that happens a little later after the automobile crash. There's so much turmoil, it's hard to remember the schedule of events, but I do know that the crash happens when she and the artist run away (poor Francesca can't even run away successfully).

The crash injures her hands and she wakes up convinced she will never play the piano again. At any rate, she winds up in a hospital or 'nursing home' as they used to call it in the care of a psychiatrist who is intrigued by her case. You see, she is sure she can no longer play and doesn't want to live and he is sure it is hysteria of a particular sort since her hands have completely healed. 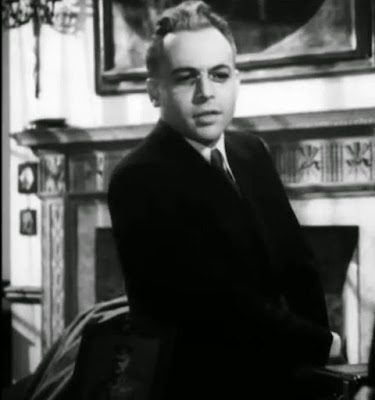 One thing leads to another and in the end, said psychiatrist conducts a very unorthodox experiment to determine which of three men (oh, alongside Max the smitten portrait painter, band-leader Peter Gay, newly divorced, turns up at the house at the bidding of Dr. Larsen) Francesca really and truly wants to be with. As if the solution to her woes must be in the hands of a male third party.

Well, in this instance, it is. Hokey, but that's the way they figured things back in the day.

At any rate, I promised you a happy ending and (depending on how you look at it), that's what we get. And oh by the way, Francesca is cured.

Movies like this had such a seductive impact on me back when I was googly-eyed and thoroughly susceptible to stories of storm-tossed romance. I truly believe that certain books and films imprint indelibly on the imagination if watched or read at certain ultra-spongy times in our development. I have always liked tall dark men and it is true that my favorite romantic hero in fiction is Mr. Rochester. And what's more, the guardian/ward romance has always been a favorite of mine though as everyone knows, Rochester is Jane Eyre's employer, not her guardian. But the dynamic is the same. And believe me, I know that in real life, men like these would be extraordinarily difficult to live with, but tell that to my then impassioned teenage heart.

THE SEVENTH VEIL is a rather intriguing period piece and viewed from the perch of today, it is a silly sort of thing. (Though I note that online it is labeled a classic of suspense.) But it stayed with me over the years and I was pleased to have a chance to see it once again. And I still like the chilling way James Mason broods.

Tuesday is usually Forgotten (or Overlooked) Films and other Audio Visuals Day over at Todd Mason's blog, Sweet Freedom, Todd will have the list of participating bloggers. If the links aren't there in the morning, they'll probably show up in the afternoon. Life can often gets in the way of blogging as we all know.
Posted by Yvette at 12:30 AM