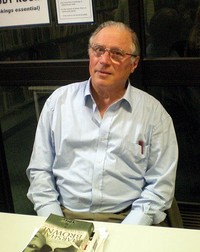 I was terribly saddened to read about the death of Marshall Browne, an Australian author whose books I love. Though he died two years ago, I've just learned about it in an email from his daughter letting me know of his passing and also that a book of his which was in its final editing stages has been published - one of Browne's Inspector Anders series, so there is that to look forward to.

(INSPECTOR ANDERS AND THE PRAGUE DOSSIER is currently in Australian bookstores.)

I never did understand why Marshall Browne's books were not more readily available here in this country. But whenever I got my hands on one it was a happy day. I treasure his two Franz Schmidt novels, THE EYE OF THE ABYSS and THE IRON HEART. Both classic WWII spy novels and much more approachable than John Le Carre's work, far as I'm concerned. Browne's work has emotion, something definitely lacking in many spy novels. And he was unmatched in establishing a sense of dread.

I've read and reread both of these novels over the years and can't recommend them highly enough. THE IRON HEART though, is especially tough to find in this country. But do try. Begin with THE EYE OF THE ABYSS which is occasionally available.

Marshall Browne and I exchanged several emails a few years ago when he was kind enough to thank me for a review and when I lamented that I couldn't find a copy of THE IRON HEART (the second Franz Schmidt novel), he very kindly sent me one all the way from Australia! Authors are often the nicest people.

My early review of THE EYE OF THE ABYSS.

My review of THE IRON HEART.

My review of THE WOODEN LEG OF INSPECTOR ANDERS which appeared directly on author Patricia Abbott's blog, Pattinase, way back when in 2010. (You have to scroll down a bit, I couldn't isolate the link.)

Browne had hinted at a third Franz Schmidt book, but it was not to be. But a fourth Inspector Anders novel is wonderful news. The first Inspector Anders book was titled, THE WOODEN LEG OF INSPECTOR ANDERS (one of the all time great book titles ever conceived - far as I'm concerned) and well worth looking for as are the other two in the series. And now there will be a fourth - great news.

The Inspector Anders books were my introduction to Marshall Browne's work and I was thrilled with my discovery of this talented author. I only wish his books had gotten to be better known in this country so that he would have gotten the literary stardom and appreciation he deserved.

Link to obituary from the Sydney Morning Herald.

Link to post from Australian Crime Writers Association.
Posted by Yvette at 12:37 PM