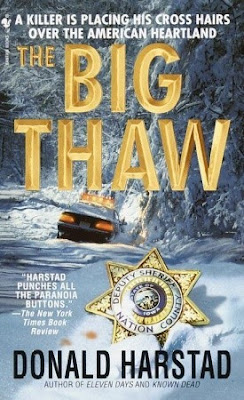 I think I'm echoing a recent review by one of our FFB bloggers (please remember I have old lady memory and can always be counted on to forget where I read what and when). If so, please do identify yourself and I'll happily give you proper credit for reminding me (what goes around comes around) of this fabulous thriller by a little known but much appreciated writer.

I must be on a role. Lately, I'm reading (and re-reading) nothing but great stuff. (Well, okay there were one or two clunkers along the way, but the less said about those, the better.)

Donald Harstad is a writer often categorized as 'regional' and perhaps that's why he's not better known. Also, he doesn't write a book a year like most other genre writers and that, perhaps, tells against him too. Though I prefer to wait for the best a writer can give me, rather than insist he write something just to meet a yearly schedule. My feeling is that you have to respect a writer's writing rhythm. If you want the good stuff, anyway.

Harstad excels at what I think 'they' call Rural Noir. Nation County, Iowa is his fictional stomping ground. The writer (a former long-time police officer) also lives and works in Iowa, a section of the country I know very little about (and, in fact, would know nothing at all except for these books). At any rate, I'm a lost cause since I always get Iowa mixed up with Idaho, so it takes me a while to figure out where exactly I am. For some reason I have a tendency to think that Iowa is further west than it actually is no matter how many times I self-correct.

Anyway, Harstad's creation is Carl Houseman, an affable, stalwart, remarkably adept Iowa deputy sheriff in whom any town in any county in any state would be proud to place their trust. The author has skillfully taken this stolid, competent man (missing all the usual genre eccentricities) and placed him at the center of this exciting series of books - in and of itself, quite an accomplishment. Carl Houseman is the kind of man who exemplifies the best sort of cop - the guy we should all be so lucky to turn to when the you-know-what hits the fan. The cop we would like all cops to be.

And though he occasionally works with the FBI and other assorted government types in this post 9/11 era - Houseman is NOT in love with the beautiful FBI agent (gotta' have one of those in every book, even this one), he is happily married, he is NOT an alcoholic (recovering or otherwise), he is NOT a guy who shoots first and asks questions later AND he gets along with almost everyone he meets. AND wonder of wonders, the people around him actually like and admire him, well, most of 'em. His boss even appreciates him. Go figure. All this, in my book, makes Carl Houseman a welcome anomaly in this modern day world of anti-heroes dragging unsavory personal baggage about. He's just a guy you can count on, doing a difficult job, often coming up against vileness of the worst sort but not allowing it to drag him under.

Speaking of vileness: Who knew that the mid-western U.S. was such a hotbed of international crime? Well, guess who shows up in THE BIG THAW but that familiar linchpin of thriller-dom, 'the arch-criminal' - this time it's Gabriel, whom Houseman and his small department have reason to remember from an earlier and very deadly encounter years ago. But not to worry, the author is dexterous enough to make all this improbability work.

Donald Harstad is terrific at combining police procedural tropes with the adrenaline rush of a break-neck crime thriller. Not an easy task as many other writers have proven. Just about everything in this fast-moving tale of conspiracy, murder, terrorism, set in a landscape of snow and ice and freezing winds, captures the imagination.

An aside: The only other author I've read who is this good at icy ambience is the multi-Edgar Award winning Steve Hamilton in his Alex McKnight series set in the upper Michigan peninsula. (If you're not familiar with those books, then it's time to add Hamilton's name to your TBR list as well.)

THE BIG THAW begins quietly enough with a frightened guy sitting in a parked car on a snowy lane in the dead of night. This almost immediately leads to two dead bodies, shot execution style (with a Russian weapon), found hidden under a tarp on a lonely, deserted farm whose owner is known to be away and oh-by-the-way why is the refrigerator stocked with food?

There's something about the routine of small town police work that I enjoy (the author's personal experience makes everything, from dialogue, to nuts and bolts investigation, to cop radio jargon seem natural and absolutely real), especially when so deftly handled. Add in some hard-boiled agents of the Federal government, and it all makes for a quick, thrilling, eye-brow raising, entertaining tale.

For just when it seems that the police might have their killer, the crime expands into something else and the Feds shows up yet again in Nation County. This time on the trail of a terrorist with Russian connections who may or may not be planning something local and spectacular. Soon there are black ops snowmobiles (well, FBI) racing over icy fields, a spectacular bank robbery, and a Mississippi (yes, the Mississippi goes up this far - who knew?) river boat - used as an off-shore casino - under assault.  I know, I know, it sounds too over-the-top, but you know, it works. When something works, I don't quibble. I just enjoy the ride. Later, I will stop and admire the skill it took to put the whole thing together.

I liked this even more than I thought I would primarily because of the excitement of the last few chapters. Every now and then, you just want to read something like this precisely because you don't want to stop and think too deeply about what's happening. (Not that this is a mindless enterprise, not at all, it just doesn't require you to carry the great weight of the universe while you're reading. That's all I'm saying.) And when the writer is this good, it doesn't hurt at all.

Since this is Friday, don't forget to drop in at author Patricia Abbott's blog, Pattinase, to see what other forgotten or overlooked books other bloggers are talking about today.