I do this list every year and every year it's the same movies since I haven't really seen anything new that captures my imagination or makes me feel especially Christmasy. Though I may be in the minority, I dislike Lifetime TV Christmas movies with their lachrymose plots and past-their-prime actors attempting to breathe life into plots force fed with pretend holiday cheer. I'd rather watch A CHARLIE BROWN CHRISTMAS over and over again - the original one. Or Raymond Briggs' THE SNOWMAN, a wistfully beautiful animated short film.

For this short list, I've left off the more obvious classics like A CHRISTMAS CAROL since it's a given we all love those. I am especially fond of three versions: the Alistair Sim one, the George C. Scott one and the Patrick Stewart one. I used to be fond of the musical, SCROOGE, but now, not so much.

We all need an extra bit of Christmas cheer these days so hopefully one or two of my favorite movies will do the trick. Escapism is the key word for the next four years, beginning with now. 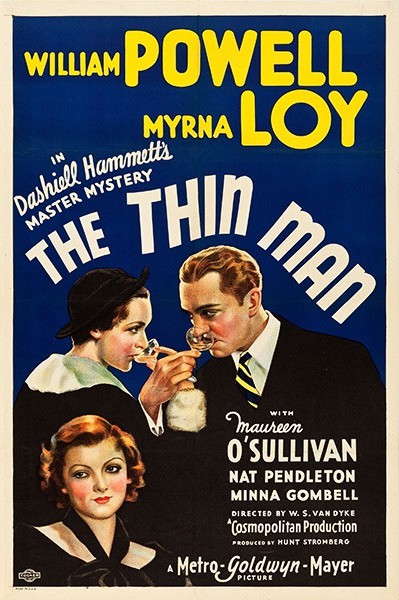 1) THE THIN MAN (1934) Though some of you might think that W.S. Van Dyke's classic movie based on Dashiell Hammett's rather dark book is NOT exactly Christmasy, I say, think again. Not only does the story take place over the Christmas holidays, but William Powell and Myrna Loy as the zany sophisticates Nick and Nora Charles share oodles of snappy dialogue and sparkling bon-mots, drink martinis, throw a party, open presents, and tackle a murder plot full of nitwits and thugs. A very young and beautiful Maureen O'Sullivan is also in the cast, as is a bad-tempered gigolo played by a young and sulky Cesar Romero. 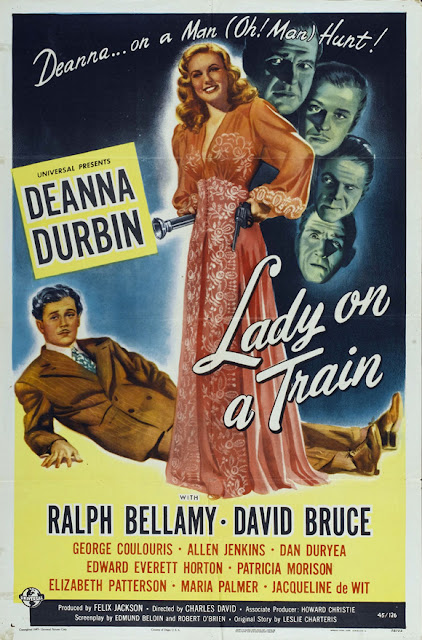 2) LADY ON A TRAIN (1945) Deanna Durbin (directed by Charles David whom she later married) plays a flighty heiress who spots a murder from her train window as her train shuffles into Manhattan on Christmas eve. And we're off and running. Durbin gets a mystery writer involved in her hunt for a killer because who else would one go to for help in solving a crime than a mystery writer? What is it about Christmas and murder? Only in movies like these where it's all improbable fun and absurd villainy and Durbin gets to sing a very nice version of Silent Night, over the phone to her dad in California. And Dan Duryea and Ralph Bellamy play sleazy, sinister guys up to no good. 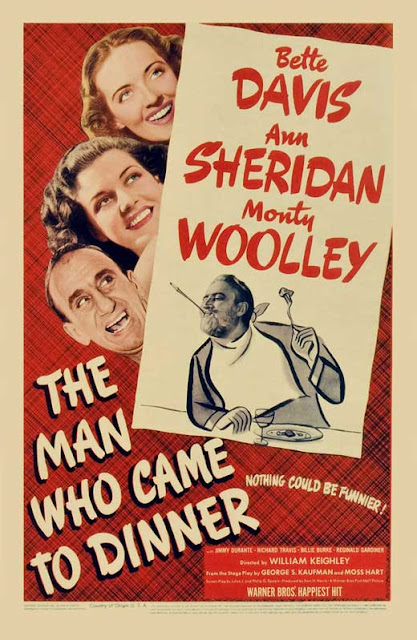 3) THE MAN WHO CAME TO DINNER (1942) Based on a stage play by George S. Kaufman and photographed more or less like one (but not to its detriment), this film does not concern us with murder but merely with a bad-tempered but powerful radio personality of immense popularity played by the irascible Monte Woolley. He is the sort of man who, if this WERE a murder a mystery, would be bumped off in the first ten minutes. But anyway, here he just takes a nasty fall on the snowy doorstep of a conservative mid-western family and is forced by medical exigency to spend Christmas with the sort of people his over-bearing New York personality loathes. Bette Davis plays his long-suffering secretary, Anne Sheridan plays a gold-digging Hollywood glamour gal, Jimmy Durante plays a maniacal old pal and the wickedly charming Reginald Gardiner plays a Noel Coward type and almost steals the movie. 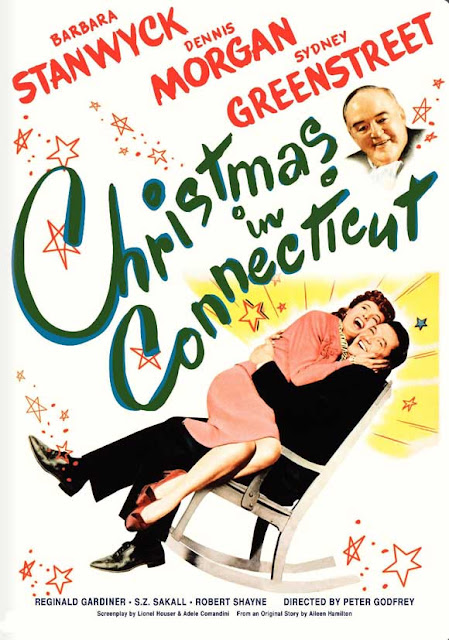 4) CHRISTMAS IN CONNECTICUT (1945) A delightful film starring Barbara Stanwyck as a hyper-drive, domestically hapless NYC magazine columnist/editor doing her best to play happy housewife (with borrowed baby) for her boss, publisher Sidney Greenstreet (who is quite wonderful), while falling in love with a soldier (Dennis Morgan) on holiday leave. The plot is kind of clunky, but since this all takes place in a movie-style Connecticut farm house during a movie-style white Christmas with jingly sled and horses, it's all good.

5) MARCH OF THE WOODEN SOLDIERS aka Babes in Toyland (1934) Christmas wouldn't be Christmas without this old chestnut. The truth is, my un-reasoning affection for this movie knows no bounds. Watched it as a kid every year growing up: WPIX, Channel 11.  I even like to sing along with the Victor Herbert songs. The scene is Toyland, toyland, beautiful girl and boy land - and the incomparable Stan Laurel and Oliver Hardy play Santa's helpers. Though the duo often does more harm than help, for instance turning Santa's order of 100 six inch soldiers into 100 six foot wooden marching soldiers. It's just as well though, for when hordes of shaggy, snarling bogie men attack Toyland, the soldiers come in handy. I love the old fashioned characterization of nursery rhyme characters such as Little Bo Peep and Tom the Piper's Son and The Old Lady Who Lived in a Shoe (literally) and Mother Goose, etc. SO much fun - even the odious Victorian villain Barnaby who overreacts his way into acting infamy. Ha!