A Rant: Agatha Christie's PARTNERS IN CRIME (The NEWEST Version) 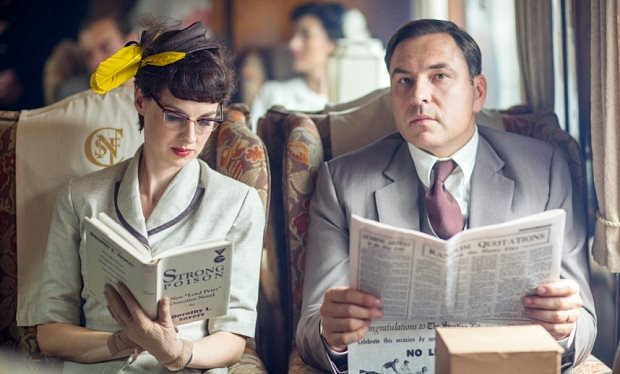 Jessica Raine and David Walliams as Tommy and Tuppence Beresford.

The actors are pleasing and professional and deserved better, especially David Walliams who does take getting used to after years of envisioning James Warwick (the ultimate Tommy) in the role. But once you get over the physical disparity, you do warm up to Walliams as the often hapless Tommy. AND I love Jessica Raine's (Tuppence) hair-do. James Fleet as Mr. Carter is superb in a thankless role - exactly my idea of a professorial spy master. But he's really the only bright spot in an otherwise dismal enterprise.

(Francesca Annis and James Warwick were the ultimate Tommy and Tuppence in the early series adaptation - relatively true to the book and short stories - from the 1980's. And available to watch on Acorn TV. In fact both series are currently available.)

But here's the problem: the two novels adapted for the newest Tommy and Tuppence endeavor, THE SECRET ADVERSARY and N OR M, were simply thrown overboard and replaced with newfangled modern-sensibility scripts based on who knows what research in the firm belief that you can take brilliance and somehow improve on it. Okay, maybe not brilliance, these are not Christie's best novels, but you know, even Christie at her less than ultimate, is better than the crap modern day writers get up to when trying to adapt her work. When faced with Christie's superb sense of timing and plot, they just cannot leave well enough alone.

This nonsensical need to IMPROVE or somehow make the stories more contemporary is completely wrong-headed. Christie's milieu is part and parcel of the Christie charm. Her people occupy a specific universe. They are who they are. You cannot improve or adapt or otherwise make them people of today. Though Christie used themes that are eternal, her characters populated a particular era. That world (long gone) with its own pressures and intrigues has a specific allure. THAT, my friends, is one of the main reasons why Christie is so enticing to so many of us.

Forgive me in advance for not being political correct: In a jarring note, in this newest version of THE SECRET ADVERSARY, a key member of the plot, Jules Hersheimmer the American millionaire searching for his niece, is played by an African American actor (Clarke Peters). The niece too is played by a mixed race actress (Camilla Beeput). No rhyme or reason. Totally disconcerting and adds little to the plot. I'm all for ethnic casting if it makes historical sense or adds to or improves the story in some way. But here it just adds confusion.

Even more interesting, Tommy and Tuppence do not even notice that Jules is black which, for the time, the early fifties (the series has been moved from WWI era) seems odd and almost stops the story in its tracks while we adjust. Wait - who is this?

Jules Hersheimmer is supposed to be a larger than life Texas oil millionaire - the third richest man in America. Here he is someone who has a company pushing synthetic sweeteners. some variation on early saccharine, I suppose. I mean - what? And the way he behaves towards Tommy is very odd. Jules was supposed to be around the same age as Tommy and Tuppence, here he is an older man. Not someone who will supposedly join in the adventure. WHY the change? No reason. It's just change for change's sake.

The original story takes place just after WWI (Tommy and Tuppence have recently been de-mobbed and they meet again for the first time after several years). The sinking of the Luisitania is a key element in the plot with its totally improbable beginning. It is meant to be improbable, not to be taken seriously - this is not a realistic spy novel. It is meant to be fun, the bringing together of two quirky young adventurers at the start of their long and devoted relationship - the 'macguffin' is an international treaty hidden away at the onset of war. For Tommy and Tuppence, it is a wild ride in search of a brilliantly devious master criminal hiding in plain sight. Which is why the attempt by today's writers to force the damn thing to take a serious 'cold war' turn is ludicrous.

It is the 1950's, Tommy and Tuppence are already long-time marrieds with a son away at school and a dog that nobody seems to be taking care of since, at the drop of a hat, both owners go off and leave the animal for long stretches of time. Once assumes someone is walking and feeding and watering the animal, but who knows? These are small details that should have been taken care of in the script. If you include a dog, then include the details of who cares for it. People notice these things.

Also, WHO are all these extraneous characters introduced in the first episode? And, oh by the way, a shooting takes place on a train and NOBODY NOTICES??? NOBODY hears the shots??? And later, was it really necessary to strangle a man in full view of Tommy and the audience? THIS is not Christie. This is someone ruining Christie - someone with ZERO understanding of the author's work. So why not just invent a new cast of characters and eliminate Christie all together? There is NO POINT to using Christie's title and a few of her characters names and then break up the plot so that it becomes unrecognizable. I suppose they are assuming that younger viewers are not familiar with the original Christie plot but then, it that's so, why use her name to begin with?? What is the point?

Was England in the 50's a successfully integrated multi-ethnic society? Probably more so than in the USA, I'd think, but political correctness is just an unnecessary element in these period dramas. Forgive me if I'm being insensitive, but there is a time for multi-ethnic casting - when it makes sense - and there is a time when it just doesn't fit. These are not stories about racial equality or inequality, they are supposedly light-hearted mysteries and/or thrillers. Modern day sensibilities adjust or they don't - if they don't, they don't watch. Simple as that.

But what with all the padding and extraneous bits of supposedly sinister stops and starts (and Tommy and Tuppence behaving stupidly and deserving of being caught by the bad guys), the whole thing turns tedious and almost impossible to watch. I stopped about midway through, furious, yet again, at the way Christie's stories get yanked around to no purpose.

As for N OR M, a story which originally takes place during WWII, when Tommy and Tuppence's grown children are away at war and both parents are feeling useless, bemoaning the fact that they are too old to take part. When suddenly Mr. Carter shows up and offers Tommy a gig at a rooming house where one of the boarders is thought to be a German agent. Simple enough plot. But no, it has to be modernized to the point of absurdity with blood spattered corpses and wild shoot-em-ups in the streets of foggy London. Ugh.

PARTNERS IN CRIME has NOT gotten a second series start and no wonder. You cannot do this to Christie's work and expect good results.

P.S. I am hesitant to watch the newest version of AND THEN THERE WERE NONE, also available on Acorn. I understand that this too was re-fashioned to make it more entertaining (?!) for modern day audiences.

And now I've read that an even newer version of THE ABC MURDERS with, I am assuming, a new Hercule Poirot, is in the works. David Suchet is/was the ultimate Poirot. We've just finished 25 years of watching him brilliantly expand on the role and eventually die, in CURTAIN.

Now, we get another Poirot? Who on earth would have the temerity? One can only shudder.