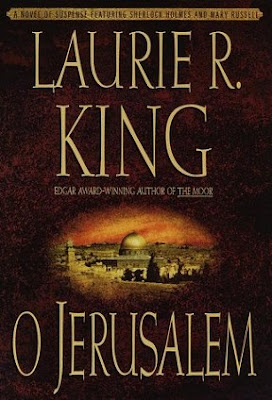 This is a re-working of a review I posted a few years ago. These days (with good reason) many of us are looking for escapism, books that are thrilling and well written and take us out of ourselves and maybe also take us back in history to a time when all things were possible. And who better to travel with than Sherlock Holmes and his apprentice, Mary Russell whom we met in the brilliantly conceived,THE BEEKEEPER'S APPRENTICE. (And if we haven't met her, then rush right out and buy the book for goodness' sake - it's a keeper! Even Conan Doyle would have approved of Russell.)


Please note: This is not the second book in the series begun so spectacularly (and audaciously) with THE BEEKEEPER'S APPRENTICE, though I think it should have been. I always recommend reading O JERUSALEM second if you've just begun or are about to begin reading the Holmes/Russell series. But of course, it's totally up to you. The 'official' second book in the series is actually A MONSTROUS REGIMENT OF WOMEN, but this could easily be read as the third book without missing a beat. All my own opinion, you understand.


It is 1918, Sherlock Holmes and his apprentice/partner, the brilliant Oxford student Mary Russell are forced by deadly circumstance to get away from London for awhile. So off they go to the British protectorate of Palestine, a country liberated from the Turks the previous autumn. At the behest of Mycroft Holmes - Sherlock's brother who is high up in murky government circles - both travelers will be performing some vague undercover work while they make their way across the rugged terrain to the city of Jerusalem. (Given a choice of several destinations by Holmes, it is Russell who has chosen to travel to Palestine, she is Jewish and Jerusalem holds special allure for her.)


To that end and upon arrival at night hidden in a skiff, they must meet and pass muster with two suspicious Arab agents who do not want them there in the first place. Mahmoud and Ali regard Holmes and Russell as nuisances who have been foisted upon them. They are not happy playing nursemaids at a time when any wrong move could bring disaster. Palestine is (and always appears to have been) a hazardous place, especially for outsiders. Jerusalem in 1918 is a hodgepodge of Brits, Arabs, Jews, Christians, spies, troublemakers and possible terrorists.


Steven immediately shipped his oars, stood, and stepped over the prow of the little boat into the shallow water. Holmes grabbed his haversack and went next, jumping lightly onto the coarse shingle. I followed, pausing for a moment on the bow to squint through my salt-smeared spectacles at the dark shore. Steven put his hand up to help me, and as I shifted my eyes downward they registered with a shock two figures standing perfectly still, thirty feet or so behind Holmes.


"Holmes," I hissed, "there are two women behind you!"


Steven's hand on mine hesitated briefly, then tugged again. "Miss Russell, there'll be a patrol any minute. It's all right."


I stepped cautiously into the water beside him and moved up to where Holmes stood.


"Salaam aleikum, Steven," came a voice from the night: accented, low, and by no means that of a woman.


"Aleikum es-salaam, Ali. I hope you are well."


"They could have landed at a more convenient time, Steven."


"Shall I take them away again?"


"No, Steven. We accept delivery. Mahmoud regrets we cannot ask you to come and drink coffee, but at the moment, it would not be wise. Maalesh," he added, using the all-purpose Arabic expression that was a verbal shrug of the shoulders at life's inequities and accidents.


The inscrutable Mahmoud and Ali, go on to become two of author Laurie R. King's most indelible characters. I have never forgotten them and with my memory (or lack thereof) that's saying something. (They will show up later in another of King's books, JUSTICE HALL under totally different circumstances.) Here they almost steal the show from Russell and Holmes. How these four characters become trusting equals realistically takes most of the book, all paths hindered by the fact that Russell is a woman who, to Mahmoud and Ali's horror, must masquerade as a man for most of their journey.


Almost from the start, things go wrong, beginning with the brutal murders of some Jewish farmers. After a brief examination of the crime scene, Holmes senses that more is afoot than just the slaughter of a farm family. The bodies have apparently been left as inflammatory messages. He is able to deduce that the dead settlers are only the beginning of some bizarre plot. A dangerous traveler is abroad in the land.

In the end, it becomes a race against time (don't you love that?) to save Jerusalem, save the peace, and save our travelers from the machinations of an insidious terrorist plot.


This is the sort of story in which the most minute clue must be interpreted correctly or disaster waits. The reader is brought along on a gritty, hair-raising adventure, travelling in unfamiliar country, across treacherous unforgiving terrain, meeting up here and there with friends but mostly with enemies. All the while Russell learning the language and dialects so she can 'pass'. Mostly they label her a mute and leave it at that. It is fortunate that Russell has a genius for languages and as she beings to get a handle on the dialects, we do too. We also begin to understand the possible repercussions from the slightest of mistakes. This is an ancient and very complex society made more even more volatile by its recent history and its current (though temporary) domination by the British.


One of many things I like about King's books is that she often mixes 'real' persons within her stories. In O JERUSALEM, we get a level, sympathetic portrayal of General Allenby, the legendary British commander. There is also mention of T.E. Lawrence (Lawrence of Arabia) and we get a brief glimpse of him near the end.


I can't equivocate, I love this book. I love the writing, the constant wary sense of danger, the grand adventure, the relationship between the four characters, the setting, the historical turmoil and everything, anything having to do with this amazingly well told story. When I feel like leaving reality behind and heading out on an improbable adventure, I reread O JERUSALEM.

P.S. In a way, this book is almost a stand-alone, being more a thriller than a whodunit or 'regular' mystery in the Holmes vein. It is totally different from any Holmes story heretofore in canon or pastiche. If you have trouble seeing Holmes as a man of action, author Laurie R. King will convince you that not only is he capable of feats of endurance more natural to a younger man, but that he is, in her hands, more a man of flesh and blood than Conan Doyle ever envisioned.


I have a signed first/first of O JERUSALEM which I watched Laurie R. King sign for me in Las Vegas years ago, it is one of my most prized possessions.