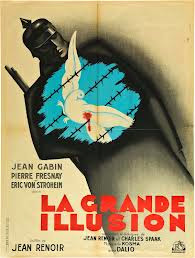 A superb film which, without much fuss or film-making shock and awe, reveals the emptiness of war and the valor and humanity of men.

After many trials and tribulations, two WWI French soldiers, Lieutenant Marechal (Jean Gabin), a working class officer and Captain de Boeldieu (Pierre Fresnay), an officer and aristocrat, are captured and sent to an impregnable German fortress/POW camp from which no one has ever escaped. The camp is run by the gentlemanly Captaine Von Ruffenstein (Erich Von Stroheim), a stoic in mind, body (he wears a stiff neck brace) and manners who soon forms an unlikely friendship based on class and mutual friends, with Captain de Boeldieu.

It is this friendship which in the end speaks volumes, historically and otherwise, about the terrible futility of war, the end of chivalry and worse, the death of illusion. A very human and approachable film, even these many years later.

THE GRAND ILLUSION is listed as one of the greatest films ever made by just about everyone, including me.

To read the entire plot, please go to the film's Wikipedia page, here.

To read a Roger Ebert review, please check this link.

P.S. Of course, Jean Renoir's imaginative concepts influenced later war films. Example: In THE GREAT ESCAPE (1963), the scene in which POW prisoners dig a tunnel and funnel the earth through their pants is taken, almost literally, from GRAND ILLUSION. 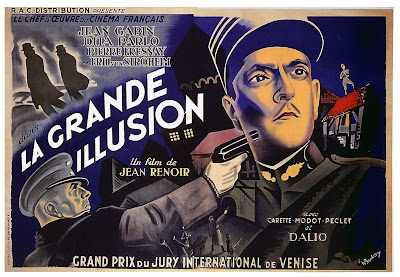