FFB: I AM THE ONLY RUNNING FOOTMAN (1986) by Martha Grimes - A Richard Jury mystery. 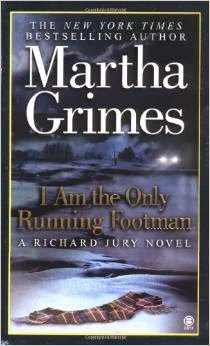 Some of you may know that I am a big fan of Martha Grimes' Richard Jury books - in fact, I've read them all. But most of you know that I'm an old lady with miles of baggage on her chassis, the result being that many of these books have disappeared into the tomb of time that is my memory.

Ergo, I'm beginning again with Martha Grimes, rereading all the Jury books I have in the house while I wait for the new Bryant and May book by Christopher Fowler, due out next month. (I drop everything for Bryant and May).

I AM THE ONLY RUNNING FOOTMAN is the eighth Jury book, the title of which is based on an existing pub in Great Britain - all the Jury books are titled after pubs and lately, restaurants.

I've written about Grimes' unique style and quirks before, so today I'm quoting an example and hope it captures your imagination. See, here's the thing with Grimes - you have to use your imagination to 'get' what she's doing. If you don't, you won't. Simple as that.

There is a killer on the loose who has strangled a couple of young women - one in Devon and one closer to home in Mayfair. Jury is called in on the Mayfair murder and then must coordinate with Brian Macalvie of the Devon constabulary, a rather parochial but brilliant cop he met in a previous book. In the meantime, Melrose Plant, Jury's aristocratic friend must put on (no matter how unwillingly) his amateur detective guise and head out to Devon to help a nice young woman in trouble.

Martha Grimes is devilishly good at combing aspects of 'the cozy' with the more bizarre and violent nature of modern day crime. It's what throws some people off - but it's the part of her writing that I love most. No one else does it as successfully, though many have tried. Grimes is unique in her handling of the crime novel, she doesn't stint on the grisly activities of human beings and their beastly natures yet her books do contain cozy elements though they are definitely not cozies. It can strike some as odd, it never did me.

And now to the section that had me laughing last night, even though I knew we were on the hunt for a probable serial killer. The setting: Melrose Plant has arrived in Devon and is staying at a black and white Tudor timbered country inn called the Mortal Man. It is owned and operated by a family with the odd last name of Warboys (or maybe in England that's a common name), innkeepers who will test Plant's mettle to the fullest.

Breakfast was an occasion involving the usual hazards. He should have known that the juice would spill, the porridge tilt, and the mackerel slide and taken the precaution of wearing a bib.

As Melrose ate the mackerel he had rescued from his lap, he listened to the keening sound coming from the kitchen. It increased and diminished each time Sally Warboys slapped open the door to bring him another dish. It might have been the screech of a kettle forgotten on the hob or the youngest Warboys (there was a baby, too) with some intractable demand. There had already come from the kitchen the clatter of breaking crockery and the usual assortment of angry voices as the Warboyses took their battle stations.

Sally Warboys, in washboard gray, came out of the kitchen in her half-run, half-walk, to deposit Merlrose's pot of tea, which struck the table edge and sent hot water splashing down the cloth, just missing his hand by an inch. To call the Warboyses accident-prone would have been to do them an injustice, he thought; there was something here that smacked of deeply rooted tribal behavior.

As he blotted a bit of grease from his cuff, he noticed that the lad who done porter duty and dropped his bag had come into the dining room. This room was undergoing a Warboysian transformation, with Bobby [Warboys] up on his ladder swinging his hammer.

William sat at the table across the room. In another this might have been called a 'respectful distance,' but in a Warboys it looked like the first step in a campaign from which Melrose doubted he would emerge the victor. The boy sat stiff and staring, with a gaze so intent it pried Melrose's eyes up like a lever.

He was assisted in this scrutiny by Osmond, who lay on the floor with his head on his paws, eyes unflinching. Melrose assumed this was tactical necessity on the dog's part, like a falling back of troops readying for a surprise attack. He wondered if there had ever been guests at the Mortal Man before he happened along, for none there seemed to know what to make of one - whether to hold him hostage or kill him outright.

The boy responded swiftly and came over to the table. He sat down and placed a small notebook and pencil, or the stub of a pencil, beside the plate of buttered crumpet that Melrose had not ordered. When Melrose invited him to have one, he pulled the plate and marmalade pot over with an alacrity that would have made one think he'd been on prison rations up to now.

The Warboyses will be mentioned now and again in future Jury books. Martha Grimes has a habit of investing even minor side characters (and their pets, usually dogs, though occasionally cats) with memorable quirks too colorful to be completely forgotten, even by me.

Simply put: I love the Richard Jury series and if a couple of the later ones are not Grimes' best work, the remainder are definitely worth looking for. Martha Grimes' Fantastic Fiction page has a handy list of all her books.

NOTE: Since it's Friday, don't forget to check in at Patti Abbott's blog, Pattinase, to see what other Forgotten (or Overlooked) Books other bloggers are talking about today.