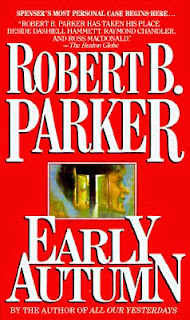 This is a readjustment of a post from November, 2010. I thought it was time to talk about my favorite Robert Parker book once again.

EARLY AUTUMN is an early Spenser book by Parker (the seventh in the series), published in 1980. It is also my favorite. Though I've enjoyed most of the Spenser books, this one remains at the top of the heap for me. I'm also extremely fond of its sequel PAST TIME, written several years and many other Spenser adventures later. But that's a talk for another day. Today I'm, once again, sharing my enthusiasm for EARLY AUTUMN and hoping to get you to read it if you haven't.


From this beginning, you know what you're in for. The kind of hip, wise-ass detective story where a client sashays into Spenser's office, they trade a few quips and within a few pages you're off and running on another tale of Boston murder and tough guy aphorisms - and you'd be right.


Except it turns out that, as the paperback blurb for Early Autumn says, "Spenser's most personal case begins here..." Oh, the case starts out with a dishy blonde hiring Spenser to do a job - no problem, but then the job turns into something Spenser and possibly, the reader, could never have anticipated.

I like this summary from my Dell paperback: A bitter divorce is only the beginning. First the father hires thugs to kidnap his son. Then the mother hires Spenser to get the boy back. But as soon as Spenser senses the lay of the land, he decides to do some kidnapping of his own. With a contract out on his life, he heads for the Maine woods, determined to give a puny fifteen-year-old a crash course in survival and to beat his dangerous opponents at their own brutal game.


The lay of the land is this: Neither the mother nor the father have any time or affection for this unhappy kid. He is merely a pawn in their divorce battles. The boy, Paul Giacomin, is withdrawn and uncommunicative, a geek in the worse sense of the word - a boy who, at fifteen, seems destined to be cast aside by life.


Against his self-centered girlfriend (and you know how we don't like her even one little bit) Susan Silverman's wishes, Spenser decides to do something about Paul before it's too late. (And by the way, this is one of the Spenser books which shows us why very few people like the character of Susan Silverman and only put up with her because Spenser, for whatever reason, loves her.) Her behavior is kind of odd really because Susan is a psychologist, you'd think someone in that profession would be eager to help a kid in obvious trouble. But I digress...


The point is: Spenser steps in and saves the day. But it's how he actually goes about it that makes this book so damned entertaining, enlightening and even moving. In a way that's hard to define, EARLY AUTUMN is more than a mere detective story, it's a primer on how to turn a troubled teenager into a good and reasonable young man.


Of course, there's violence and brutality and a murder or two, but this is to be expected in a Spenser tale. It's the other story going on, the saving of Paul Giacomin that makes this book so special. This is a book to be read in one evening if you like since it's the sort of thing that's hard to put down until the finale which is both satisfying and brilliantly realized.


In certain ways, (I'm sure you'll recognize what I mean) it wouldn't hurt for any adult with a teenage boy in his or her life, to read Early Autumn and perhaps learn a thing or two from, yes, an action-filled private eye book in a genre not known for its child-rearing wisdom.


It's hard not to love this book (and Spenser) and I recommend it even if you are still not a serious fan of the mystery/thriller persuasion.

Robert B. Parker's Fantastic Fiction page has all the titles of all the books in all the series.

And since it's Friday, don't forget to check in at Patti Abbott's blog, Pattinase, to see what other Forgotten (or Overlooked) Books other bloggers are talking about today.
Posted by Yvette at 12:30 AM