Tuesday Forgotten Television: ACTION IN THE AFTERNOON - From the action-packed days of yesteryear and the warped annals of television history! 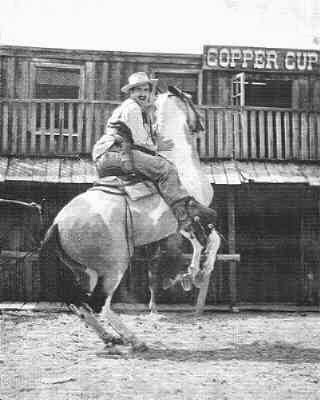 Gil Thompson and Horse in ACTION IN THE AFTERNOON


The other day a friend and I were talking ancient television shows and suddenly ACTION IN THE AFTERNOON jumped into my brain. Unfortunately no one else seems to have heard of this, much less watched it - or maybe it's that no one wants to admit to having watched it.

ACTION IN THE AFTERNOON ran for a year - 1953 - 1954 - and I rushed home religiously every day after school to watch it. (This was before AMERICAN BANDSTAND with Dick Clark caught on big time and rock and roll changed the world forever. Hyperbole? I think not.)

A live-action western - the only live western without inserted film clips - ever broadcast on CBS or elsewhere, for that matter, and I seem to be the only one who ever watched it. Tell me this isn't so. Disabuse me of the notion. Tell me there were others out there enthralled by the whole idea of horses and 'colorful' town folk, schoolmarms, bank robbers, sheriffs, grizzled cowpokes and fist fights, moving about in real time, mistakes, missed cues, odd background noises, recalcitrant and/or jumpy horses and all. (Actually, the horses were the best part.)

I can trace my eternal affection for cowboy movies and such to Roy Rogers, Red Ryder, Lash LaRue, The Lone Ranger et al  keeping me company Saturday afternoons at the movies, and of course, ACTION IN THE AFTERNOON every day after school. Hey, I lived in Manhattan - this was the wild west to me. Even if it originated in Pennsylvania.

Since it's Tuesday once again, don't forget to check in at Todd Mason's blog, Sweet Freedom, to see what other Forgotten (or Overlooked) Films, Television and/or Other Audio/Visuals other bloggers are talking about today.
Posted by Yvette at 1:31 PM