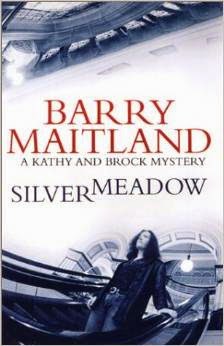 Four years ago, a vicious, methamphetamine-laced armed robber named Gregory North (known as 'Upper North') killed two guards in a bank robbery and got away. But Chief Inspector David Brock has never stopped looking for him even as other cases intervene and the trail has all but disappeared. Now, at the site of a more recent and very grisly murder, a witness claims to have spotted North in a crowd of shoppers.

This is my second favorite Barry Maitland book (after THE VERGE PRACTICE which I waxed rhapsodic about a few weeks ago) and here are the reasons why:

1) The setting: the ostentatiously huge and often mind boggling Silver Meadow Mall in Essex, scene of the crime. The modern retail mall as refuge for disaffected teenagers and petty crime is no stranger to modern fiction, but Silver Meadow is beyond anything ever experienced by modern day shoppers or, for that matter, modern day readers. This is mall as nightmare destination. In fact, after reading this book you might not ever look at your local mall in quite the same way again. I know I won't.

With it's ever-present uniformed security team and the constant monitoring of cameras round the clock, one wonders how a teenage girl could be murdered at Silver Meadow and no one have noticed anything. But the sprawling mall has hidden depths (literally) of dark cavernous byways, having been built on an old and mostly forgotten archaeological site. It is this sort of unexpected detail which adds an eerie aura to this tale of violent crime set among the forced gaiety of shoppers and workers at a retail palace of glitz - a place with a Vegas-like working volcano which spews lava every hour on the hour accompanied by flashing lights special effects.

2) The protagonists: Chief Inspector David Brock sends ever intrepid Sergeant Kathy Kolla to investigate the murder of a 14 year old whose body has turned up in a trash compactor at Silver Meadow, while he investigates the possible return of the murderous villain Gregory North - at first seen as a separate investigation despite the possible mall sighting.

As usual with a Barry Maitland book, you get a variety of colorful side characters who turn up to obfuscate and/or add their own brand of special 'charm' to what is a dark tale of murder at the hands of a cunning killer and his witting and/or unwitting cronies.

This is pretty gritty stuff, so not light reading at all. Still, it's the sort of book I wouldn't mind rereading and probably will. I was simply fascinated by the bone-chilling behind the scenes at this sinister mall. Most especially with Christmas shopping season just at hand.

It's Friday, so don't forget to check in at Patti Abbott's blog, Pattinase, to see what other Forgotten (or Overlooked) Books other bloggers are talking about today.
Posted by Yvette at 12:30 AM