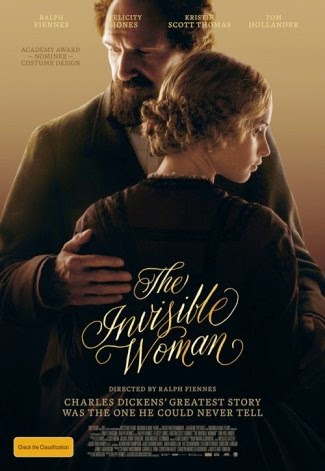 THE INVISIBLE WOMAN is a film directed by Ralph Fiennes with a screenplay by Abi Morgan, starring Ralph Fiennes and Felicity Jones and is based on the book of the same name by Claire Tomalin. It seemed the kind of period Victorian thing I'd probably like. The film centers on the story of how Charles Dickens, rightly beloved by all and sundry for his brilliant literary gifts, behaved caddishly towards his wife (she'd dared put on weight after giving birth to ten children in 22 years - horrors!), caused a public separation (scandalous in those tight-laced Victorian times) by 'carrying on' with an eighteen year old girl who would later become his mistress for the rest of the aging author's life.

Or so the story goes. Of course we weren't there and much of the correspondence was burned by those involved so who knows what really happened. 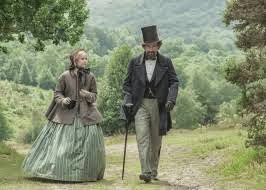 The film, directed by Ralph Fiennes is a major disappointment and you know how I love to write about Major Disappointments.  Hence, today's post to call attention to a film I'm NOT recommending. (I'm quirky that way.)

To be fair, there are one or two well done moments: One is the racing scene, the grouping (and costumes) of which is apparently based on a painting by the British genre artist, William Powell Frith. 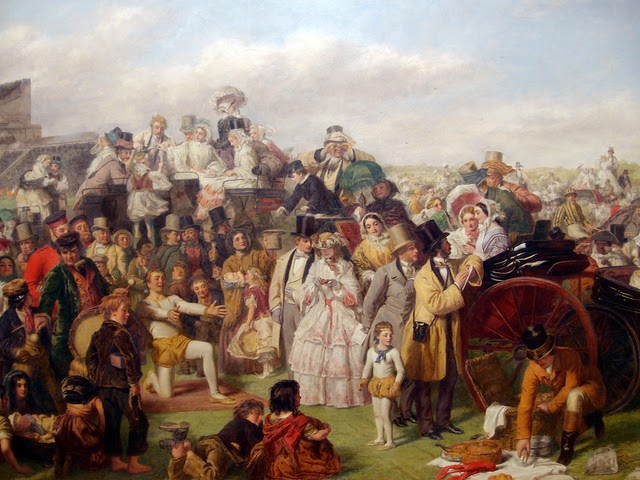 The second scene is the wrenching train wreck in which Dickens is forced by the strictures of convention to maintain he is traveling alone even as Nelly lies hurt at his feet. Not a proud moment.

The film's costumes and sets are, of course, perfection (the Brits excel at this) and the actors are pretty good except for one thing: Felicity Jones in the lead playing Nelly Ternan - The Woman. She is actually invisible, that is, she is so boring, so bland, so self-effacing, so laid back, so pale, so...yes, dare I say it? - so INVISIBLE! (Sad to say, the camera doesn't love her.) Well, okay, in keeping with the symbolic title of the film, you might say that that was the director's point. (Dickens did keep his personal drama behind the scenes as much as possible in those scandal loving/scandal abhorring days. Mistresses were not the sort of thing one generally paraded about in public.)

But to make the woman such a non-entity beggars the point of what Dickens saw in her to begin with. (Yes, yes, actresses then had to be self-effacing and fearful of their reputations since they were regarded as little more than prostitutes.) But ladies and gents: what about this particular woman turned the elderly genius on? Merely the fact that she was young and thin and his wife was fat? Maybe. Wouldn't be the first time. Certainly there was nothing about Nelly's personality (as shown in the film) which would cause a man of a certain age to flaunt convention, create scandal and fall madly in love -  even if he was close friends with scandal-prone fellow author Wilkie Collins. (A tale for another day.)

You know as well as I that most Victorians were one thing in public and quite another behind closed doors - but it's hard to imagine - I really can't conjure it up - Charles Dickens in bed with anyone. Come on, try it - see if you can do it. That's one of the film's problems as well.

And yet the man had ten children, at least. So there is that to ponder on if we must.

But the fact is that some stories are better left to the imagination - or not, as the case may be. This is definitely one of them.

To paraphrase an old Victorian chestnut: I don't care what people do behind closed doors as long as they don't do it in the street and scare the horses.

Yeah, I'm down with that.

Have you seen this film? Do we agree or disagree? Come on, speak up. I can take it. 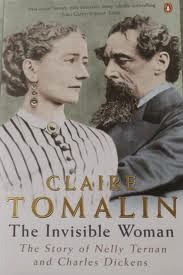