You all know that lately I've become a VERY ENTHUSIASTIC D.E. STEVENSON FAN GIRL - right? Well, even if you didn't know it before, please be aware of it now and forever more. Dorothy Emily Stevenson was a talented and prolific English author who created some of the most satisfying, engaging, endearing and gently bred stories and characters in the history of the English language. How's that? No, no  exaggeration - I NEVER exaggerate.

I've been reading all the Stevenson books (a sojourn begun a couple of months ago with THE HOUSE ON THE CLIFF ) in my library and now it appears I've come to the end and must begin looking far afield - online, probably. 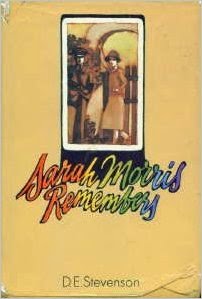 My library actually has this copy.

Both books feature events which take place at around the same time and both books feature two young and attractive German speaking male characters. SARAH MORRIS REMEMBERS begins as a gentle coming-of-age story in which Sarah recounts an idyllic childhood in the English countryside where her father was the much loved village vicar. Sarah is one of those coltish young English girls in literature whom we instantly like and want the best for.

In later years, we meet Ludovic Charles Edward Reeder (called Charles), a charming Austrian friend come down from Oxford with one of Sarah's older brothers, to visit the vicarage. The fourteen year old Sarah unknowingly charms Charles with her naturally direct manner and as time goes by, they become good friends, exchanging letters and such.

How you may imagine an English vicarage to be is exactly how the author imagines it as well - that's one of the things about Stevenson that I like so much, she always seems to be on a similar wavelength with her readers. Or more likely, we readers were on a similar wavelength with her. The best of D.E. Stevenson's books resonate with a capital R.  There is so much familiar imagery. There was a world once upon a time, that sort of thing.

Any way, back home in Austria, Charles's father (the family owns a huge estate) is an outspoken opponent of Hitler and the son worries that father will get into trouble as war looms on the horizon. But he (Charles) is not the favorite and not the heir (he has an older brother) so Charles must fend for himself though the entire family appears to depend on his good common sense - something they apparently lack. Though he'd rather stay in England, Charles returns to Austria to temporarily take charge of the estate which has been foundering under the auspices of his father and hapless brother.

When Charles finally returns to England and begins the naturalization process, he and Sarah decide to marry since she is now of age. He wants to give her a diamond, she prefers his signet pinky ring. Stevenson heroines will always prefer the signet pinky ring.

But before they can be married, fate interferes once again.

After the Anschluss in 1938, Charles' imprudent father is taken into custody and Charles must once again head back to Austria to see what he can do, insisting that he will return soon. Not so unexpectedly, he disappears as war is officially declared.

In England, Sarah's father, the vicar, insists on giving up his 'living' and the two head to London to see what he can do to aid in the war effort as the city faces nightly bombing. All the while Sarah, working as an interpreter, fears she'll never see Charles again. These chapters set in war-torn London are especially effective as Sarah, doing her best in a city under siege, is thrown in with a new set of intriguing characters.

Of course, this being a D.E. Stevenson book, idyllic scenes set in Scotland will be slipped in and probably a happy ending. But it's the journey, you know. It's the journey. I loved this book. 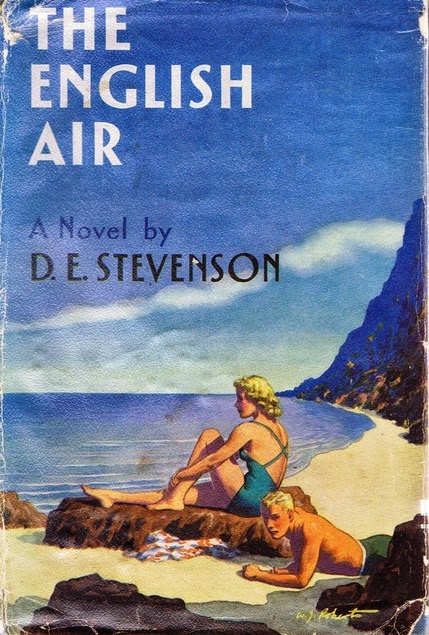 THE ENGLISH AIR (1940) features a young German character name Franz Von Heiden who arrives in England in 1938 to stay with his English cousins at their family home, Fernacres. Sophie Braithwaite and her daughter Wynne are prepared to welcome the son of Sophie's favorite long ago cousin Elsie even if, as it turns out, his father is currently a Nazi. The Braithwaites live with Sophie's brother-in-law (he has his own suite of rooms in the house), the elegant and enigmatic Dane Worthington who, apparently involved in some sort of espionage, decides to keep a careful eye on their guest.

Cousin Elsie was a lively and beautiful English girl who unadvisedly married Franz's father and went off to live with him in Germany a few years before WWI. As you may imagine, the marriage did not have a good outcome and Elsie passed away, sad and disillusioned.

Now, years later, Elsie's widower is a devoted Nazi party member. He's sent his son to England to find out about the English - how they live and behave. At first, Franz is gun-ho to do his father's bidding, but as he begins to learn the freedom of English ways, and befriends his cousins, all the while growing closer to Wynne, Frank (as he's now called) is torn between his parental duty and his duty to himself.

Refusing to believe that Hitler really wants war with England, Frank views as proof, English Prime Minister Neville Chamberlain's fateful words, '...peace in our time.'  Naturally enough, Frank (and everyone else) is devastated when Hitler breaks his word and marches into Poland.

The effect of war from the German point of view is briefly but unflinchingly depicted as Frank goes back to try and reconcile with his father - but then determines that there will be no place for him in this 'new' Germany. He must return to England somehow and do what he can to aid the British cause. All very well written and imagined  by D.E. Stevenson at a time (1940) when England and Germany were actually at war.

One evening per book is just about right. You know how that goes. Sleep can wait.

Since it's Friday, don't forget to check in at Patti Abbott's blog, Pattinase, to see what other forgotten or overlooked books other bloggers are talking about today.
Posted by Yvette at 10:00 AM