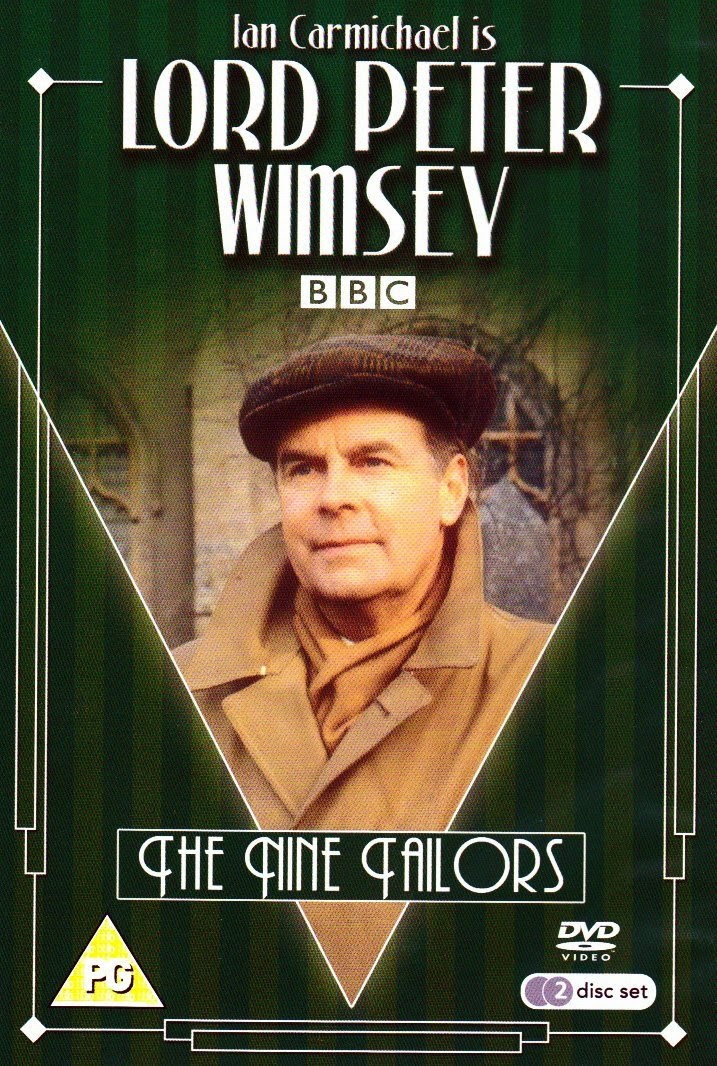 In my opinion, there's little doubt that Ian Carmichael was born to play society super-sleuth Lord Peter Wimsey. (In this particular episode, Wimsey calls and without fanfare is put through to the Archbishop of Canterbury with whom he is on first name basis - now THAT'S society clout.) You know how we always talk about certain actors born to play certain roles? Well, this is one of those. Carmichael not only looks the part, he is supremely at ease within it.

THE NINE TAILORS (1974) based on Dorothy Sayer's book of the same name is considered by some to be the best of the Peter Wimsey books, though I'm not part of that 'some'. I did think, however, that the television adaptation (by the BBC and shown in this country on Masterpiece Theater once upon a time) was that rare instance when (despite changes) a mini-series worked better than the original book. Less chance to get buried in Sayer's church bell minutiae.

But first: An Explanation (more or less) of the book title (from Wikipedia):

In some parishes in England the centuries old tradition of announcing a death on a church bell is upheld. In a small village most people would be aware of who was ill, and so broadcasting the age and sex of the deceased would identify them. To this end the death was announced by 'telling' (i.e. single blows with the bell down) the sex and then striking off the years. Three blows meant a child, twice three a woman and thrice three a man. After a pause the years were counted out at approximately half-minute intervals. The word 'teller' in some dialects becomes 'tailor', hence the old saying 'Nine tailors maketh a man.'

The bell used in the novel for the announcement is the largest (tenor) bell which is dedicated to St. Paul.

The story begins on the eve of WWI in an English country manor where a wedding is being celebrated. One of the guests is young Lieutenant Peter Wimsey, a friend of the groom. Another guest is an elderly woman who stubbornly insists on wearing her famed emerald necklace and later - uh oh - hiding them in a fairly obvious place.

When the emeralds are stolen over night, the two miscreants are quickly captured (with Wimsey's help) and sent to prison where one of them, a man named Deacon, later escapes. But the jewels are never found.

Later, while in the trenches in France during a lull in the fighting, Wimsey and a man named Mervyn Bunter chat. Wimsey tells the fellow soldier and friend the story of the stolen emeralds and the resulting untimely death (from stress and angst) of the lord of the manor, Sir Henry Thorpe. Thorpe had forked over the full price of the stolen emeralds (60,000 pounds) in lieu of insurance to the old lady - he had felt that responsible for the theft under his roof. She had no moral compunction in accepting the offer though Sir Henry's fortune never quite recovered.

Bunter, by the way, will go on to save Wimsey's life when shortly after their talk, a bomb buries Wimsey under a mountain of debris. I vaguely remember that in the books, Wimsey has some sort of breakdown after this event but I could be wrong. The mini-series doesn't go into it. 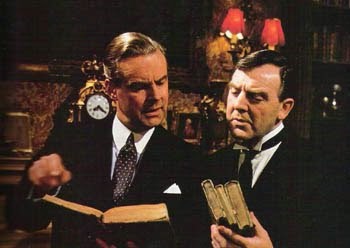 Twenty years later, as luck would have it, Wimsey's car has a flat tire in the vicinity of the Thorpe Fenland estate and with Bunter now serving as Wimsey's 'man' (butler/valet) they encounter a mystery which seems linked to the long ago burglary and resulting unhappy events which also blighted the son and heir who has since passed away from illness.

When at Easter, the widow also dies, a dead body is found already occupying the grave next to her husband. It is the body of a man, face badly beaten and missing both hands.

THE NINE TAILORS was filmed very nicely for television in what looks like tape rather than regular film, this adds a certain flavor to the piece. Maybe it's that the show looks more like a play than a movie. But for whatever reason, it works for me. I loved the outdoors scenes in which rain is the natural ingredient. Apparently this corner of England is a rather soggy one and a lot of the action takes place under torrents of cold rain, so much so that my toes began to feel squishy in my slippers. There occurs too, near the end, a flood which forces an entire village to seek shelter in the local church. At that point, I felt a cup of tea to be in order since I rarely keep sherry in the house. 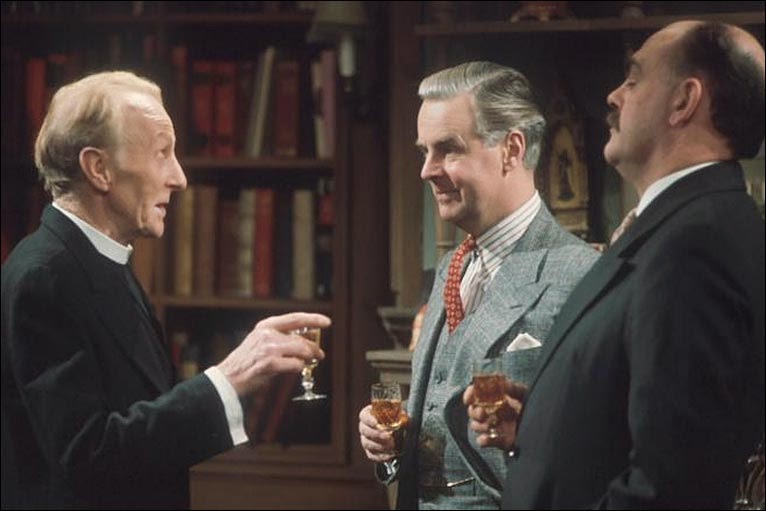 
The cast, as always when dealing with the Brits, is perfection.

My favorite (besides Ian Carmichael as Wimsey and Glyn Houston as Bunter) is Donald Eccles as Theodore Venables, Rector of Fenchurch St. Paul's who adds just the perfect touch of eccentric fussiness to an obvious toughness of character. He is a little Peter Cushing-like, but a bit lighter in tone. In a word (well, a couple of words), he is wonderful in the part. 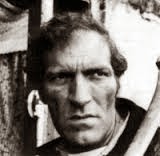 Also excellent is the craggy faced Neil McCarthy as the tragic Will Thoday.

Adding its own grim verisimilitude is the bleak rain soaked English Fenland moodily photographed, adding just the perfect gloomy tone to an engrossing, atmospheric mystery that begins with a jewel robbery and results in murder, family unhappiness, bigamy, an impenetrable cipher, a long buried secret and a deadly flood. Occasionally accompanied by the sounds of pealing bells in a belfry.

Since this is Tuesday, don't forget to check in at Todd Mason's blog, Sweet Freedom, to see what other Forgotten or Overlooked Films, Television and/or Audio/Visuals other bloggers are talking about today. We're a fun bunch.