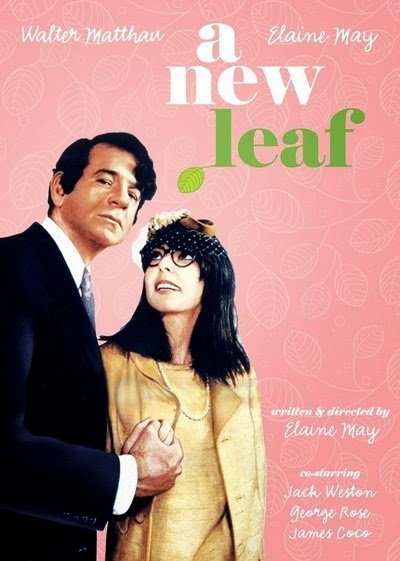 I'm happy to announce that the best romantic comedy of the 1970's, 80's, 90's and on into the 21st century is FINALLY available on Netflix for home viewing. After waiting and waiting, practically growing a beard waiting,  Walter Matthau and Elaine May are now only as far away as your nearest mail box.

(Unless you already own the film which in that case places you in the league of rare and most fortunate of earth creatures. 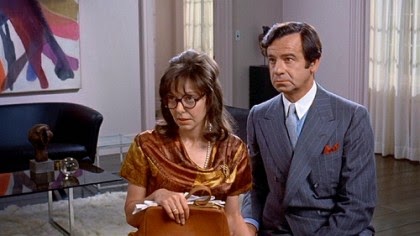 Look at that body language. Elaine May and Walter Matthau - source

A NEW LEAF, in my un-biased opinion, is a romantic comedy for the ages. Hyperbole? I think not. If this film doesn't make you laugh, then ladies and gents, woe to you.

Yes, I know I've raved about this movie plenty of times before. But when has that ever stopped me from returning to rave some more?

At some point I got tired of people saying "Huh? I never heard of this movie." HEY - your loss. Not my fault. I told you about the genius of Elaine May. Well, maybe not in exactly those words, but close enough. After all she wrote, directed and stars in A NEW LEAF so we can only assume the film reflects her unique magnificence.

And if you're still not convinced, read: Ferdy on Film's Review which informs us that the film is now available in 'gorgeous blu-ray'. I mean, really, can it get any better?

Now read my previous review if you still don't believe (Jeez are you hard to convince!): My review of A NEW LEAF.

Now is the time to act, movie mavens! Get your hands on A NEW LEAF and not only be prepared to laugh but also to be unexpectedly touched. See how the most obnoxious, reprehensible gold digging ex-rich boy, Henry Graham (Walter Matthau), is brought to heel by his purely unexpected affection for Henrietta Lowell (Elaine May) the most fumblingly hapless, klutzy millionaire professor of botany who has ever lived. (But maybe not for long if Henry decides to carry through with his murder plans. The cad.)

How I envy those of you seeing this for the first time.....Sigh!

Since this is Tuesday, don't forget to check in at Todd Mason's blog, Sweet Freedom, to see what other Forgotten (or Overlooked) Films, Television and/or Other Audio Visuals, other bloggers are talking about today. We're a happy enough crew.
Posted by Yvette at 9:30 AM

Email ThisBlogThis!Share to TwitterShare to FacebookShare to Pinterest
Labels: A New Leaf, Elaine May, Walter Matthau