Tuesday's Forgotten (or Overlooked) Film: IN AND OUT (1997) starring Kevin Kline 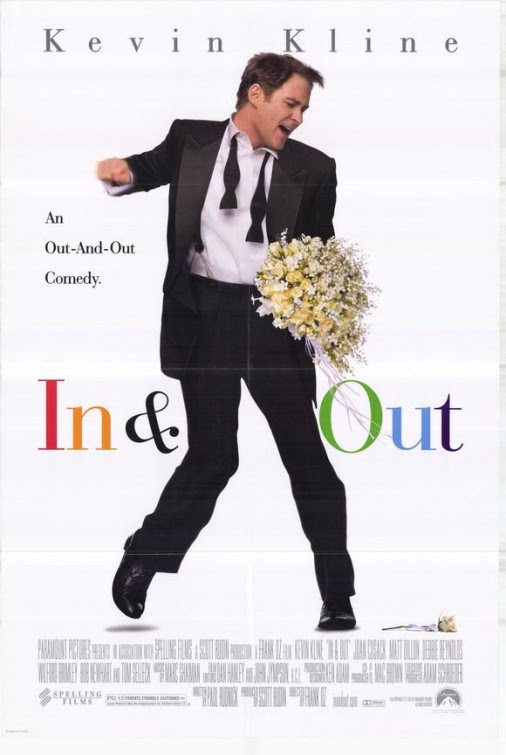 Not exactly a forgotten classic but that's okay, I don't, necessarily specialize in 'classics'. IN AND OUT is simply a wonderfully funny 1997 film with, I suppose, a socially political bent, directed by Frank Oz and written by Paul Rudnick and starring Kevin Kline, Tom Selleck, Joan Cusack, Matt Dillon, Bob Newhart and Debby Reynolds.

Obviously, I like the man. (Even if he couldn't save the God-awful DE-LOVELY.)

And please someone tell me why Joan Cusack is not a MAJOR star?!! She is simply sensational. (She was nominated for Best Supporting Actor in this role but lost out to Kim Basinger (?!)

Okay, here's what IN AND OUT is all about:

We meet Howard Brackett (Kevin Kline), a high school teacher on the eve of his marriage to his long suffering fiancee and fellow teacher Emily Montgomery (the extraordinary Joan Cusack). Emily has self-esteem issues and has recently lost 75 pounds to fit into her wedding dress.

Howard is just a nice guy living what is an apparently idyllic existence in the small town of Greenleaf, Indiana. He is well-liked by one and all and is the most popular teacher in school until one Oscar night when in a very clumsy way he is 'outed' on national television (with the whole town watching) by actor Cameron Drake (Matt Dillon). In his effusive thanks to his former teacher, as he accepts his Best Actor award, Drake reveals what he assumes must be common knowledge back home in Greenleaf. 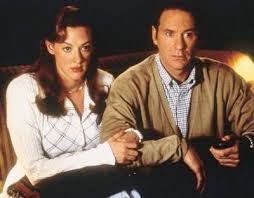 All hell breaks loose. It's not only that no one in town, in school, among his friends and pupils know that Howard is gay, it's that Howard didn't know. Even if he does wear a snappy bow tie, all along he has simply assumed that everyone has natural rhythm, loves Barbara Streisand, listens to scores from Broadway shows, and enjoys poetry and dancing. These are all supposed clues to his probable homosexuality, meant to simplify the concept for one and all but done in a very humorous and even innocent way and thanks to Kevin Kline's amusing bewilderment, there doesn't seem to be anything which could be termed objectionable by anyone gay or straight. (At least I don't think so.) He really is clueless so obvious clues must be dropped in his (and our) path. 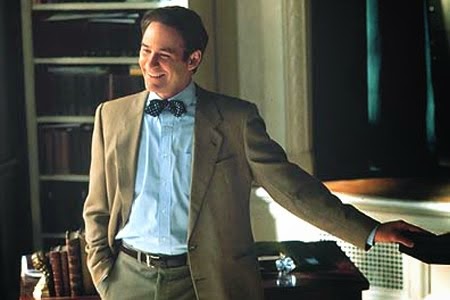 The national press descends on Greenleaf on the day of Howard's wedding, sensing a Big Story. There's must be a Big Story if it involves a Big Movie Star and Cameron Drake is known to be on his way back home with his requisite, achingly thin model girlfriend (Shalom Harlow) by his side. (He keeps telling her to eat something.) Drake realizes he's fumbled, made life difficult for a man who he was really only trying to honor and he's determined to set things right. 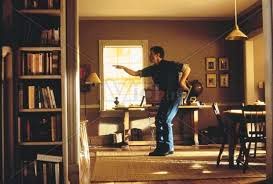 In the meantime, a confused Walter is assessing his entire life and in one hilarious scene resorts to a self-help book and tape guaranteed to make him more manly by teaching him to ignore his 'natural rhythm'. Manly men don't dance. Kevin Kline is brilliant. (As is the voice on the tape.) 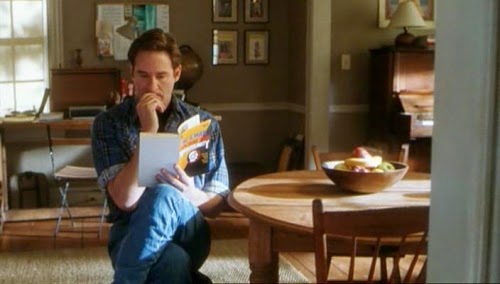 Tom Selleck (in one of his best and most comfortable roles) shows up as television newsman Peter Malloy who we learn has his own not-so-secret secret. Tom Selleck is an acquired taste that I never really acquired. Yes, he's incredibly good looking, but hey, so are many other Hollywood actors. Yes, he's talented - to a point. But for me, he just never had that 'Major Hollywood Actor' thing written all over him. I'm also not crazy about his holier-than-thou politics. 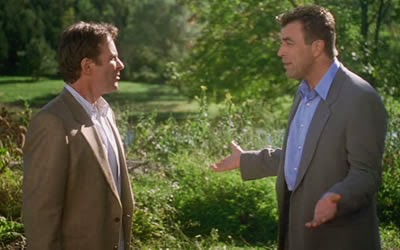 But it was interesting to see him play a secondary role (the Second Lead!) which includes sharing a highly improbable but super sexy kiss with the leading man. Selleck is simply wonderful - to my surprise. Not to mention that there is some real chemistry between both men. 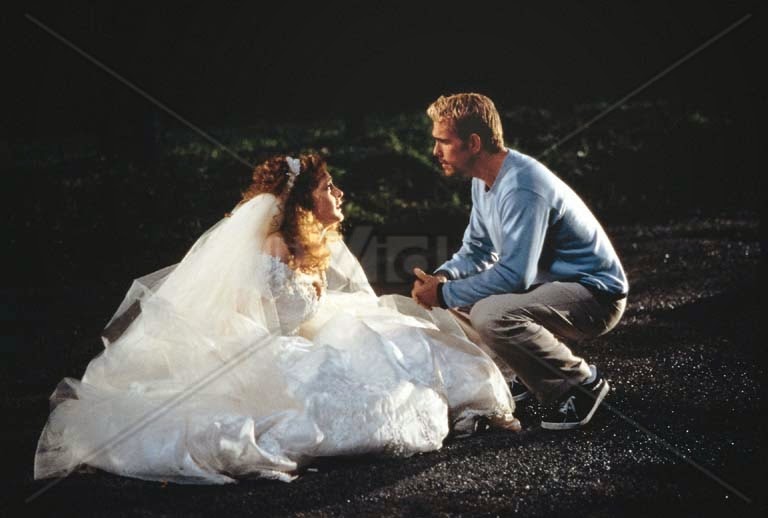 I also love the very funny scene when a declaration at a local bar sends a crazed Emily Montgomery, left at the altar and still in her wedding dress, running out into the night looking for justice. I also love the sweet way in which this scene is resolved when Cameron Drake admits his high school crush on Emily (once upon a time, his teacher) never went away. He never even minded her weight issues. (Yeah, right. But let's make-believe.) And the last we see of them, both are sitting on the hood of a car eating ice cream. (At least that's how I remember it.) So Emily gets her own happy ending which, considering all she's been put through, is more than justified.

My only quibble with the entire movie is the 'preachy' ending in the high school auditorium which should have worked much better, but somehow doesn't. Maybe it's that it isn't handled especially well. Maybe it should have been subtler? At any rate, it doesn't spoil the film at all, just makes you wish it had been fine-tuned a bit.

The rest of the cast includes Bob Newhart (in a thankless role) as the high school principal and Debby Reynolds and Wilford Brimley as Howard's parents whose disbelief in the face of the incomprehensible is fun to watch. These two old pros know how to make the most of small scenes.

All in all, a terrific movie tackling a difficult subject with charm and even a bit of artlessness. It is meant to please and amuse and it does.

Since today is Tuesday, don't forget to check in at Todd Mason's blog, Sweet Freedom, at some point, to see what other Forgotten or Overlooked Films, Television or Audio-Visuals, other bloggers are talking about today.
Posted by Yvette at 3:24 PM

Email ThisBlogThis!Share to TwitterShare to FacebookShare to Pinterest
Labels: Frank Oz, In and Out, Joan Cusack, Kevin Kline, Tom Selleck