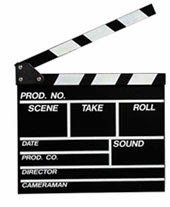 You know who I mean - right? Usually the third or fourth name in the credits. The discarded fiance, the unctuous boyfriend, the sophisticated elder (occasionally with monocle) in striped waistcoat, the toady family friend, the hero's hapless buddy or the urbane smoothy with a roving eye, etc, etc, etc. All memorable staples of beloved movies of old.

The mannequins featured on this post were created by Pierre Imans (1850 - 1930) and I'm assuming, sold, by his company to retail stores et al, once upon a time. I'd never heard of Monsieur Imans or seen any of his work until just a couple of days ago but once I'd gotten a look at the male 'types' Imans created, I was immediately taken by their odd charm and bemused by a sense of recognition.

Then it hit me - I knew these men from the movies, from the hours and hours I spent as a kid watching my favorites in black and white, sitting in front of our clunky Admiral television which had pride of place in the living room. I don't know who the models for these mannequins were but certainly I know who they represented. I mean, look at them.

Hence, today's post. A tribute to the runners-up, also-rans and the perpetually second best, second-rate, second gear, second fiddle, second in command, second to none except the leading man. The second lead. 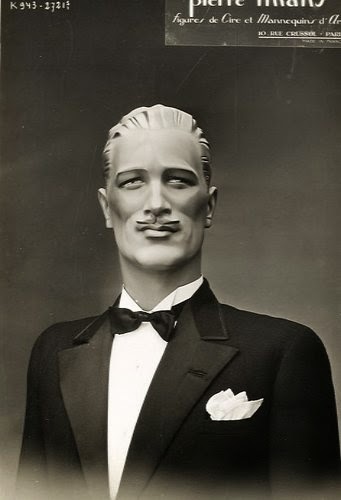 Has to be my favorite. (I'm loving the cheekbones.) But really, who is this guy? Well, I'll tell you, he's the exquisitely mannered and tailored ultra sophisticated bon-vivant found at any 1930's high society dinner party here or on the continent. The long time family friend, brilliant dinner partner and expert dancer. Someone's uncle, most likely to wear spats.

A life long bachelor and occasional gambler who lives by his wits, practiced charm and chiseled if slightly smarmy good looks. (It's that mustache, don't you know.) Usually named Clark or Benton or Palmer, he is often seen in the background, his eyes gleaming at the leading lady or perhaps her beautiful mother. But more often than not he is squiring the young heiress around the dance floor or gardens until she spots the man she's really looking for. No woman with any intuitive smarts will take our guy seriously, but for squiring purposes he's makes excellent camouflage. Can anyone guess he's nursing a broken heart? Nah. 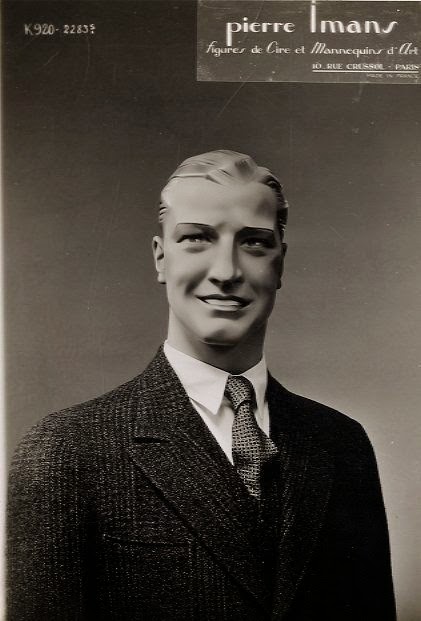 This one definitely has that John Litel look. That's because his name is usually Patrick or Lyle or Glenn. A stiff rather humorless type, born to bank or dabble in local politics, he lives on a small inheritance which he naturally wishes were larger. A committed bridge player, he is the hero's cousin on his late mother's side and enjoys being a big fish in a small pond. His idea of a good time is sitting around the country club, nursing a martini and looking smug. Still deemed 'the perfect catch' - but maybe not for too much longer - he was also born to be discarded by the leading lady, a willful heiress who wants to be on the Broadway stage and would rather dance than play bridge. 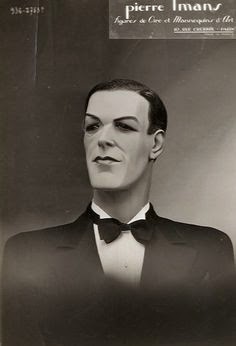 A swarthy, steely-jawed dangerous type who will assuredly attract the careless and dim-witted. Hair slicked back, he has that slightly sleazy, dissipated look which spells trouble. Usually named Johnny or Ray or Eddie, he will stop at nothing when there's money to be made. He owns a nightclub of course (bought with the spoils of blackmail ), where the equally dissipated rich come to throw their money away. Both he and the hero are at odds over their interest in Scarlet, a local chanteuse looking to escape small town life. Twice a widower, he attracts older women with money which generally bodes ill for their bank accounts, not to mention their persons.


(Thanks to Jane and Lance Hattat for the alternate suggestions, also to John for spying out the monocle.)

Berlin (or maybe London or Lisbon) in the 30's was the natural stomping ground of this svelte looking guy - note the monocle (which I overlooked on the first go-around). Easily bored, pale and dissipated, his hair slicked back and probably perfumed, he is a dodgy sort known to perform mysterious errands traversing the continent in first class when he's not running a night club known as The White Lily. He is, at the moment, prepared to double cross the leading lady who is intent on smuggling her wounded brother (too long a story to go into now) onto the Orient Express. Usually named Viktor or Zoltan or Egon and pretending to royal ancestry, if there's any trouble afoot, you can bet our guy will have a notion or two. He and the hero (a spy for the Brits) have had several run-ins but since they were both at Oxford together, they occasionally play for the same team, intrigue-wise. 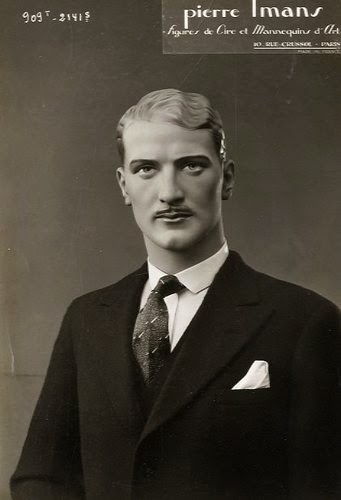 This impressive facade belongs to the hero's older step-brother. A familiar man about town seemingly above suspicion - if only it weren't for that little pencil thin mustache. (Isn't that always a give-away?) A banker and dabbler in Wall Street, he spends most of his evenings at the country club, hanging around the leading lady fetching drinks and offering unctuous advice. Usually named Julian or Llewellyn or Carson, he is willing to wait out the ingenue's current string of beaus, believing she will eventually turn to him if only because he is stalwart, good looking, well-groomed and rich. In fact, he is a mama's boy, needy, stubborn and weak, his fortune mostly myth. 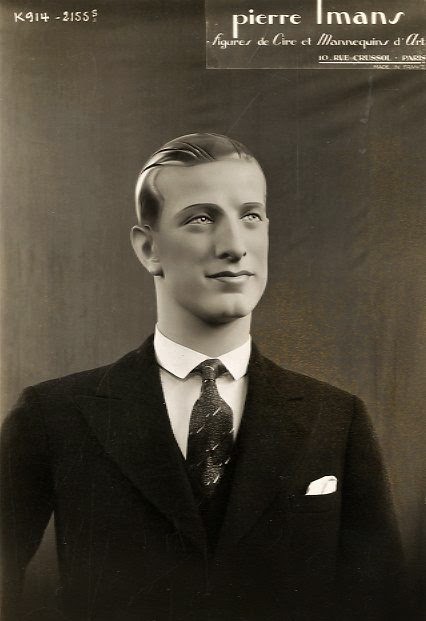 Here we have the ambitiously crusading small town doctor who desperately wants to cure any and all known diseases if only some wealthy benefactor will leave him the money to open his own hospital. He once saved the hero's life (nursed him through a bout of a rare South American fever). In the meantime the doc conducts tireless research on a little known curare derivative which accelerates healing - side effect: invisibility. Usually named Peter or Jeff or Walter, he is devoted to science though not too devoted to ignore the daughter of the richest man in town. She is intrigued by that far-away zealot's gleam in his eyes. A gleam which she would do well to think twice about. 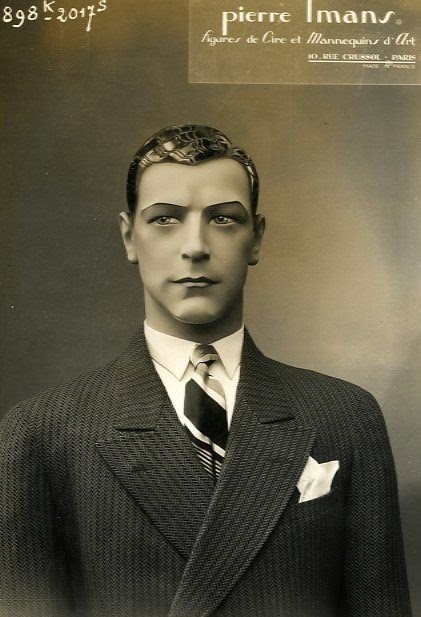 Oh this guy definitely bears watching. Look at that stubborn jaw, that wide lapel jacket. He is the leading lady's brother, a well-known attorney whom everyone seems to trust; the suave, determined repository of a town's secrets, keen to use his knowledge skillfully, perhaps politically. He has made himself a recognized commodity - a young man going places - and is on a first name basis with everyone who's anyone. A character usually named Gilbert or Barton or Stan, he is a wily bachelor determined to wed the redheaded widow of a client who has been left a fortune by her much older hubby recently deceased. Good luck to him. 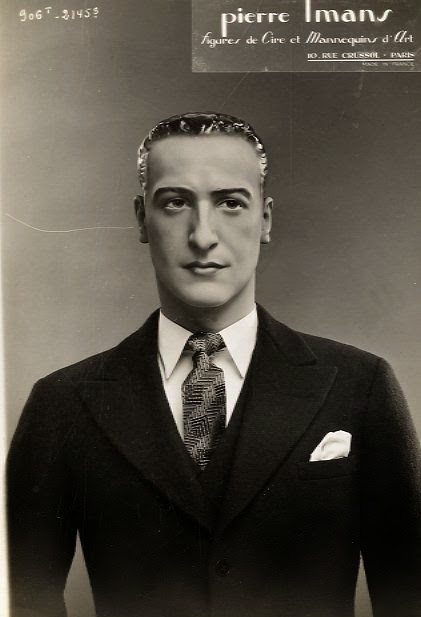 The District Attorney, who else? A friend of the hero's family. A steely-eyed seemingly incorruptible champion of the law. He is seen everywhere, at the country club, on the golf course, at intime power dinners where only the town's movers and shakers are present, at the race track. The race track? Well, that bears thinking about. Usually named Oscar or Donald or Warren, he is married to an ambitious (and famously icy) blond determined to be first lady of the state when not belittling her hubby behind closed doors. No wonder his unhappy eye has recently fastened on the hero's newly grown-up tom-boyish little sister. Prediction: heartbreak. 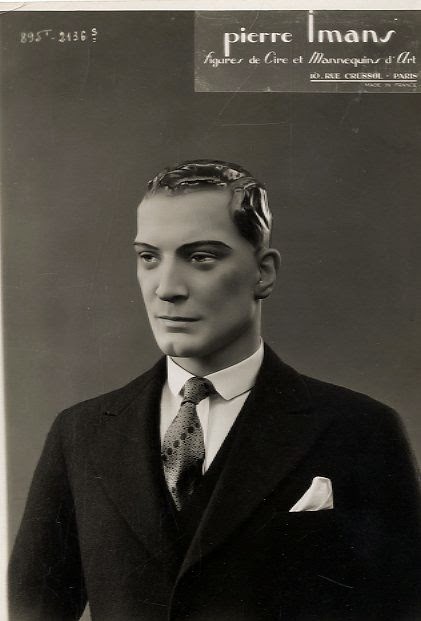 The resolute publisher of the local newspaper who owes his life to his best friend who, while both fought in the trenches of WWI, took a bullet meant for him (the hero survived only to be burdened with a permanent limp). Usually named Martin or Evan or Rand, that cleft in his chin gets our guy in the door, but it's the hard stare, the sheer determination and the wide shoulders which earn him respect around town. There's something about those thin lips that make me think he's a take no prisoners kind of guy.

Married to the hero's ex-fiance (a story too long and convoluted to go into here) he carries around a deeply personal secret which could wreck several lives.

So, what do you think. Did I get it right?