Have I Got a Book for You! SACRE BLEU by Christopher Moore 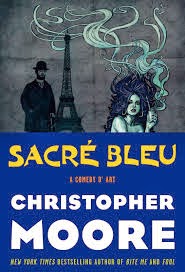 Hold onto your paint brushes here we go:

We all know that Christopher Moore has a wicked sense of the absurd plus a deranged sense of humor bar none. But in SACRE BLEU, A Comedy of Art, Christopher has outdone even himself.

Forget all you know about the French Impressionist painters and their ilk, Monet, Renoir, Bazille, Manet, Van Gogh, Toulouse Lautrec, Seurat, Berthe Morisot, Gaugin, Pissarro, etc. Everything you were taught or read about them was, more or less, not so true.

At least, according to Christopher Moore who brazenly defends his position:

I know what you're thinking: 'Well, thanks loads, Chris, now you've ruined art for everyone."

You're welcome. It's my pleasure. (The man is unrepentant.) I simply set out to write a novel about the color blue; I can't remember why now. When you start with a concept that vague, you have to narrow your scope fairly quickly or it will get out of hand, so every early in my research great bits of history had to go by the wayside so I'd have room to make stuff up.

So what I'd be asking right now, if I were you, is what, among this big blue lie, is true? What really happened?

First, I drew the characters' personalities mostly from accounts written by people who knew them, many of the accounts of the Impressionists coming from Jean Renoir's biography of Pierre-Auguste Renoir, 'Renoir, My Father'. Jean Renoir had been wounded in World War I and had come home to Paris to recover in his father's apartment, where the artist recalled his life to his son in an interestingly sanitized version...

The entire time frame of SACRE BLEU was constructed around that July afternoon in 1890 when Vincent [Van Gogh] shot himself because of a fact I stumbled across very early in my research. Vincent Van Gogh did shoot himself in that field in Auvers where three roads converge - shot himself in the chest - then walked a mile cross-country to Dr. Gachet's house seeking treatment. Vincent and Theo [his brother] are buried beside each other within sight of that field in Auvers. I have stood in that spot, and walked from there to the doctor's house, which is a museum now, and I thought, What kind of painter does that? Who tries to kill himself by shooting himself in the chest, then walks a mile to seek medical attention? It made no sense at all.....His death was both a mystery and tragedy.

As far as the history and mystical properties of the ultramarine pigment, some details are based in truth, most are just constructed for the story.

The pigment was, for a long time, more valuable than gold...

The talented (I might even say 'brilliantly talented') Christopher Moore who is, admittedly, an acquired taste for some (thankfully I acquired it ages ago), has outdone himself this time out. Wait, I already said that, well what the heck, I'm saying it again. I thought that nothing could top my heretofore very favorite Moore book, A DIRTY JOB, but darn if Christopher hasn't proven me wrong. (And by the way all you dirty jobbers out there, Christopher is working on a sequel. Yeah, I know. O.M.G.)

SACRE BLEU (and don't you love that title?) is a colorfully bawdy (how could it not be?) fable which purports to explain how blue became Sacre Bleu thereby changing the course of art history. That's all.

Ultramarine was a hard to come by pigment once upon a time. It was created by grinding lapis lazuli into powder. Artists would purchase either the powder (which whey would mix with certain ingredients, i.e. egg yolk or whatever they used to make paint) or they'd buy the lapis and grind it themselves. Some artists preferring to do everything from scratch. As time went by, tubes of paint became available but early on painters would seek out someone known as the colorman from whom to purchase 'the makings'.

But this is not merely a tall tale of the color blue...uh, bleu, it is also the story of how certain artists of the time - bohemians all - late 19th century - were heavily influenced not only by the expensive pigment, but by a certain highly sexed muse who appeared out of nowhere (in differing, ravishing guises) to send the various artists into artistic (not to mention, physical) raptures which, in many cases, doomed them unknowingly to an early death. What, did you think all that talent and brilliance required no penance?

But according to Christopher Moore, who should know, in between the painting and the rapturous boinking, spectacular art was created. Unfortunately most of those paintings disappeared and were never seen again. Hint: they are part of a whole mumbo-jumbo mind-boggling recycling process.

'Bleu' as the lascivious and rather pragmatic muse is known to her intimates has been around for ages - literally. Though shifting - jumping to and fro - as she does from body to voluptuous body, one cannot tell her ancient status. Her traveling companion, an ugly, scrunched up and very odious (not to mention malodorous) little man known as 'the colorman' is apparently her boss. For millennium after millennium, the two have been mixing the blue pigment, messing with artists, and up to no good.

The story begins with the death Vincent Van Gogh. Suicide? Murder? It's a puzzle. Why was the Dutch painter so afraid of his colorman? (Perhaps because he was no dope.)

To help get to the bottom of that mystery (and others), Christopher Moore turns to our hero, Lucien Lessard, a hapless baker with painting aspirations who, in the meantime, works at the family bakery in Montmartre, hub of the Parisian bohemian art world. Here is where everyone in the area lines up for fresh baked baguettes every morning. We know they're fresh because Lucien's mother breaks the first loaf over Lucien's head to get the proper snap which tells her the bread is done. Lucien, as might be understood, is not all that happy with this arrangement.

Because Lucien's father was not only a baker, but a painter in his spare time (who came to a sad end - a story we won't go into) Lucien is friendly with several of the painters who routinely hang out in Montmartre; painting and boinking, boinking and painting - the usual.

At any rate, Lucien is friends with and has been tutored by (among others) Pierre-August Renoir and Camille Pissarro whom he reveres, but he is also a pal of the ultimate prince (well, actually a Count) of debauchery, the diminutive painter Henri de Toulouse Lautrec who comes off in this book as a lascivious goat but still someone you'd want to know and maybe even have affection for. Is there such a thing as a likable lascivious goat? Is there a house of ill repute which Toulouse-Lautrec has not frequented?

In their pursuit of the muse who in the guise of the beautiful Juliette has made off with Lucien's heart (not literally, figuratively) the two intrepids join forces to hunt the secret mystery source of the color blue...uh, bleu AND the location of the venomous little colorman's stash. To that end, Lucien and Toulouse-Lautrec make a great pair of fumbling detectives. So much fun to imagine.

The devil-may-care painter makes a perfect, if slightly nutso, side kick for Lucien as they take on the case of the missing muse. I most especially liked when, tailing the colorman, Toulouse-Lautrec fastens mechanical lifts to his feet (an invention perfected for him by a friendly neighborhood inventor who otherwise spends most of his time attempting to teach rats to drive a small chariot) which enable him to walk like a regular sized man - sort of, albeit a trifle awkwardly.

The vision of past and present, real and surreal, has never been more convoluted as Lucien learns of the true power of Sacre Bleu and he and we learn to what lengths a man will go for the woman, uh, muse, uh, phantom, he loves.

This is an utterly beguiling book if you don't mind Christopher Moore's occasional use of bawdy language and totally outrageous artistic conceits - I didn't. I also loved that actual Impressionist paintings were included in the text which added a nice verisimilitude to the whole shebang.

A dazzling book. Maybe not what you'd expect, but then, you knew that going in. It is Christopher Moore after all. The man has no shame. HA!

P.S. This would make a fabulous movie. Is Luc Besson available?