Book Review: THE BONES OF PARIS by Laurie R. King 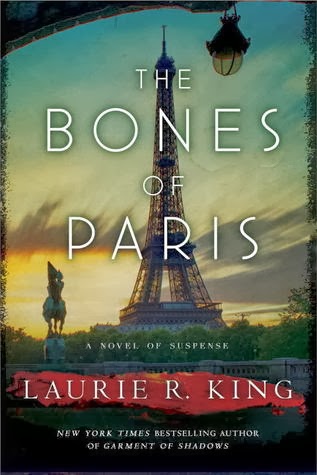 THE BONES OF PARIS by Laurie R. King received a 'starred' review from Booklist and was named one of the Year's Best Books by the Sacramento Bee and not only that, it has already earned a listing on my Favorite Books of the Year 2014 post - just sayin'.

It's the 1920's - the Jazz Age - but Paris is not the city of romantic gaiety we've come to know (in person or otherwise) and love. This is not the lively, fruity, happy-go-lucky Paris of Woody Allen's MIDNIGHT IN PARIS. Not at all. This is a grim and rainy Paris, full of lingering shadows, dark alleyways and even darker imaginings. Author Laurie King would have us know that life among the intelligentsia and the avant garde isn't all absinthe and sex (though a great deal of it is, actually) - being an artistic genius is damned hard work - bad behavior is only to be expected.

Down these mean streets of Paris walks a man who is not himself mean (sorry, dear Mr. Chandler). His name is Harris Stuyvesant. He is a hard-drinking, ramshackle, former FBI man currently earning his meager keep as a private detective. A man haunted by tragic past events, Stuyvesant still dreams of a lost love while trying to slake his desolation with booze and sordid one night stands.

Hired to find a troubled American girl from Boston who has disappeared without a trace (isn't that always the way?), Stuyvesant's investigation soon draws him into a dark and depressing world full of subterranean creatures with delusions of grandeur, artist poseurs, bent geniuses with twisted motivations who crave ever darker and more loathsome amusements in the name of 'art'. Evil is ripe here.

Mix in the 'depravity as art' horrors of the Theater du Grand Guignol in Montmartre, owned and operated by a ghoulishly sinister individual, scion of an old and wealthy French family with influence in high places and it becomes obvious to Stuyvesant that a man who struts about in a cape and monocle bears looking into. The lavish descriptions of this odd fellow's hearth and home, not to mention, the theater at the heart of this mystery, add to the 'Danse Macabre' quotient and are worth the price of admission as far as I'm concerned.

No question about it, this unsettling book features several characters one would hate to meet up with in any dark alley. For instance: the grotesque little man who fashions tableaux from human bones and other unhealthy minutiae. Apparently, except for the hero and his few friends, everyone else is consumed by the idea that artists must act-out in order to be artists. Mixed in with King's fictional creations are an easily recognized frenetic assortment of 1920's American ex-pats, among them Sylvia Beach (owner and proprietor of famed bookstore Shakespeare & Co.), Ernest Hemingway, Pablo Picasso, Josephine Baker, Cole Porter, etc.

In fact, the surrealist photographer Man Ray, an unpleasant fellow full of grandiose pomposity and nasty ideas, is a murder suspect once it's discovered by Stuyvesant, that a serial killer may be at play. It's always fun (in this case, eerie fun) to run into people you've heard about and maybe read about, people who were living it up in Paris during the 20's - people you might even have envied or wanted to meet once upon a time. Though after reading THE BONES OF PARIS, envy might be tempered with extreme caution.

Stuyvesant, in the great tradition of slouchy but dogged private eyes with their own agendas, earns our respect as he continues to look for the missing girl even as he begins to suspect she is dead and gone. He has been more-or-less warned off the case by the French police in the person of the likable Doucette who will become an ally and who turns out (improbably) to be engaged to the woman of Stuyvesant's unsettled dreams. Author Laurie King has various story-lines working, all intertwined and inventive in mostly believable ways, all inevitably leading to a very troubling denouement.

To that end we have Bennett Grey showing up in Paris before too long (though the book begins with him). Grey is the damaged brother of Stuyvesant's one true love, Sarah, a woman who was grievously wounded in the previous Stuyvesant and Grey book, TOUCHSTONE. (Back story is brought in by King in a very intelligent and non-fatiguing manner.) Grey was injured in the war (WWI) and was left with the strange ability to detect lies - not to put too fine a point on it, he's a sort of human lie detector whose abilities are coveted by the government. He is covertly (and not so) watched wherever he goes, hence he has become a recluse (who could blame him?). Living in Cornwall at the very edge of the sea, Grey only occasionally ventures forth since even ordinary lies can cause him acute physical and emotional distress.

Man Ray's continued posturings and suspicious behavior (alongside his beautiful and perhaps not too fastidious mistress, Lee Miller) add their own sinister obfuscation to a story which only grows darker and more macabre as Stuyvesant finally comes to the conclusion that the truth is actually much blacker than what even he could have imagined.

Don't miss this creepy-crawly excursion into the dark underbelly of Paris in the 20's written so lavishly and so - dare I say it? - enthusiastically, by an author whose Sherlock Holmes and Mary Russell series is always at the top of any book list I care to make.

P.S. It is not necessary to have read TOUCHSTONE, to enjoy this second in the Suyvesant and Grey series. Laurie R. King is very good at what she does.