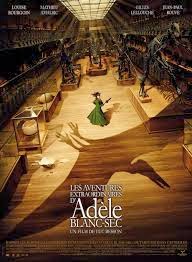 Where have I been that I never heard of this film until last week? (I know, I know, I'm always lamenting. Can't help it, it's my way.)

French film director, writer and producer Luc Besson (He of FIFTH ELEMENT fame - remember how much fun that film was? Made no sense, but hey, since when has that ever stopped Luc?) is not exactly an unknown quantity so stands to reason his name rang a dim bell when I first came across mention of this film. 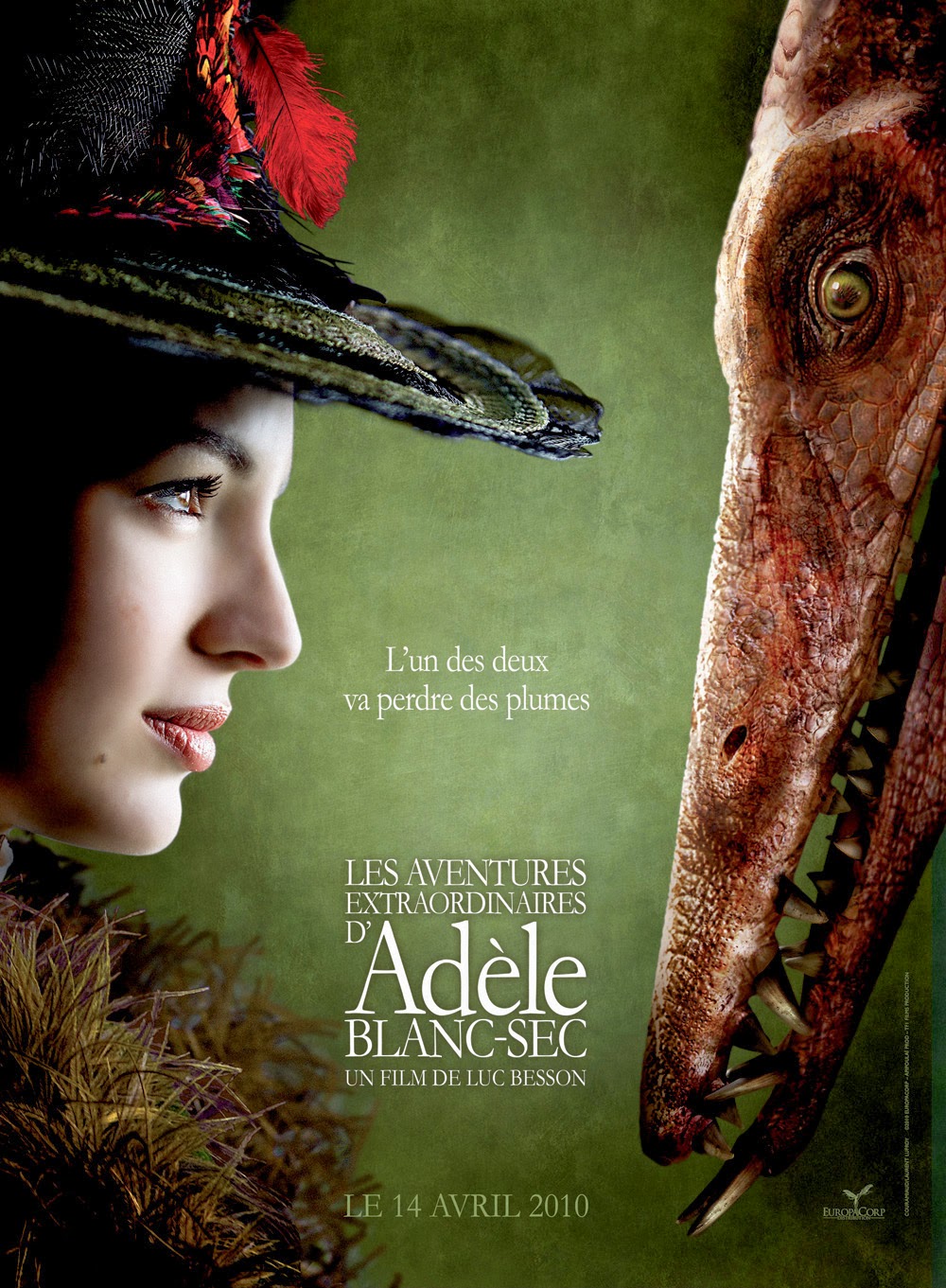 THE EXTRAORDINARY ADVENTURES OF ADELE BLANC-SEC (Orig. title: Les Adventures Extraordinaires d'Adele Blanc-Sec) is nothing less than the frisky French love child of Indiana Jones and Nelly Bly with soupcons of JURASSIC PARK and THE MUMMY, not to mention THE PERILS OF PAULINE, thrown in for good measure. 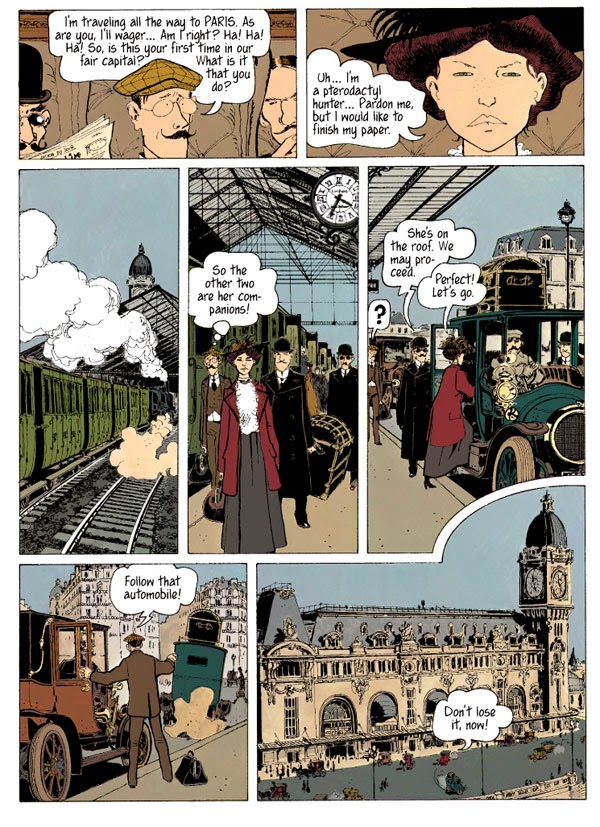 The film is based on the popular comic books created by Jacques Tardi though the screenplay (according to IMDB) was written by Luc Besson. Little of the story makes any real sense so if you're expecting logic and linear story telling and you're not charmed by absurdity, pass this by.

But you'd be missing a delightful time at the movies. This is a boisterous adventure tale with nothing more on its frenetic mind than to show you a good time. Though the film drags a bit in parts and is probably a tad too long, those are minor faults when seen as a preposterous whole. The film has little nudity or blood-letting which, in and of itself, is remarkable, considering - proves once again that neither of those two hackneyed items are necessary for a romp of this sort. I'd hate to think what an American film-maker might have made of it. 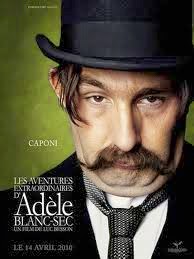 I'm assuming that the characters established in the comic books are in the film as well and may be familiar to some (not to me). They all have a certain cartoon outlandishness (in make-up and hair and general unkempt grooming), especially the cops and the big game hunter and the...well, really, all the men in the film seem to have escaped from the stage of the nearest broadest burlesque. This may take you aback at first, it did me, but I got used to it.

The style of the film is episodic (I suppose it would have to be), several incidents (if you can call a prehistoric pterodactyl brought back to life to terrorize the skies and the sheep population of Paris, a mere incident) occur at a rapid pace as we're first introduced (by the charming speaking voice-over of Bernard Lanneau) to the nearly empty streets of night time Paris but then we quickly jump to the Egyptian desert where Mlle. Adele Blanc-Sec is on an expedition in the hot desert sun to discover and bring back to Paris a certain ancient mummy. 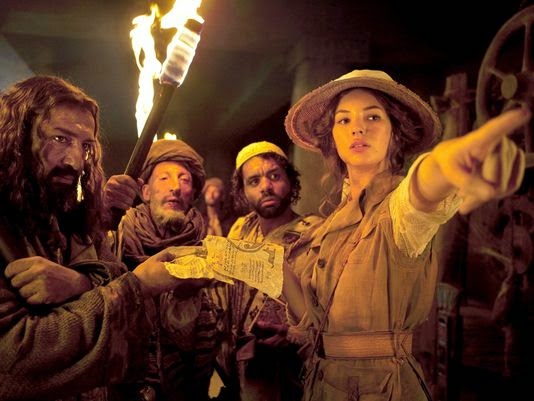 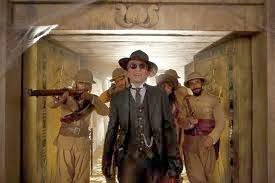 But, as will so often happen, bad guys with bad teeth show up to stall her quest and Mlle. Adele is immediately placed before a firing squad. Of course there's a hair-breadth escape, then we head back to Paris where a certain hapless young man (Nicolas Giraud) - who happens to work at the Natural History Museum - has his fancy captured by Mlle. Blanc-Sec and the adventures she writes about and before you can say, 'Sacre bleu!', he is caught up in the Mlle's various schemes. 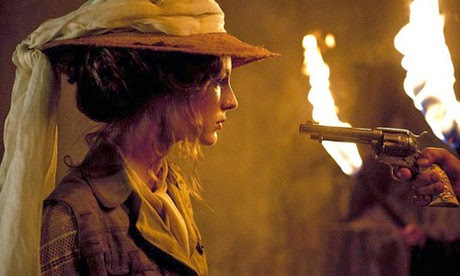 Adele Blanc-Sec (Louise Bourgoin) is a fearlessly intrepid reporter sent off to foreign locations by her paper to scout out and report back, step by undaunted step, on the most lurid phantasmagorical escapades she can involve herself in. Nelly Bly eat your heart out. But when her boss sends her to Peru to climb Machu Pichu, the headstrong Mlle Adele instead heads to Egypt to liberate an ancient mummy. Why? Well you may ask.

Adele is the equal of any man when it comes to action, adventure and derring-do. Not bothering to play by the rules and smarter than any man in any room, nothing stops the resourceful Mlle. from the completion of her mission. As played by the beautiful Louise Bourgoin, Adele is the sort of single-minded female that most unsettles those of the opposite sex. In short, she is a harridan of the first order. She is also of a certain age and unmarried. Une femme de carrier.

A vague idea of the machinations of the plot:

Because her beloved twin sister lies (or rather, sits up) in a macabre comatose state, the result of an awkward and rather painful looking accident about which modern-day medicine can do nothing, Mlle. Adele Blanc-Sec will stop at nothing to bring back to life the only physician she thinks can help her twin: the brilliant court physician of a multi-millennia-dead Egyptian pharaoh. Makes perfect sense to me. 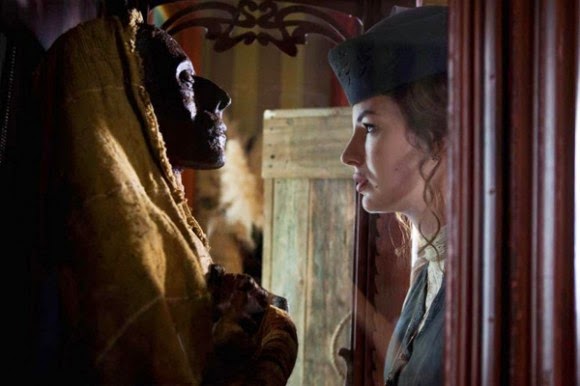 Once the mummy is actually back in Paris (after much trial and hair-raising tribulation), Mlle. must contact Professor Esperandieu (Jacky Nercessian), the one man who actually has the power to revitalize the mummy. Unfortunately the wizened Professor is currently in jail awaiting execution (by guillotine) for enabling a certain pterodactyl (remember him?) to kill a couple of people.

Because of some mysterious mumbo-jumbo performed by the professor, the creature was hatched from a giant egg on display at the Natural History Museum. 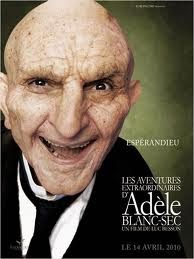 Jacky Nercessian as the old Professor with mysterious powers.

Never say die, the indefatigable Mlle. dons several disguises in several failed attempts to stage a prison break. Somehow she must free the Professor so he can revive the mummy who will then use long-lost medical skills to revive the sister who is languishing in a comatose state. Simple - no?

Adele even beseeches the French President for a pardon of the old Professor but all is lost when she is herself arrested - in a gross misunderstanding - for trying to assassinate the President.

There are several wonderful scenes in the film, most especially one where as a last resort Mlle. Blanc-Sec uses the obliging pterodactyl to help free the Professor, another where the creature can be seen up in the sky disrupting a flock of geese who comically break formation. A small thing, but very amusing. Then there's that plucky Scottish terrier, the charming little dog belonging to the jovial French President, watch while the two play fetch on the Palace lawn. Watch while the pterodactyl flies overhead looking for a snack...Wait, I can't watch!! Quelle horreur! No, no a thousand times no! 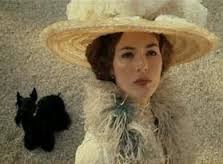 Not to worry. Luc Besson is no fool.

Then there's the scene where the mummy comes to life and with a tres charmante French attitude explains that he's not a doctor but a physicist. Oops! This blackened heap of bones steals the movie. Which only goes to show that the French language and an insouciant attitude can cover a lot of sins. 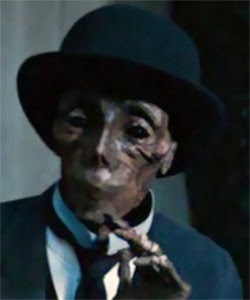 Regis Royer as the mummy Patmosis - he steals the movie.

The scenes near the end when an entire brigade of mummies freed from the confines of the museum, headed by Ramses himself, take a night time stroll through Paris are just wonderful. Especially when Ramses, viewing the Louvre Museum, states that a pyramid would go very nicely right in the middle of the courtyard.

Last but not least, in the last couple of scenes in the film, Mlle. Adele wears the most luscious, the most charming, the most fetching chapeau ever created to sit atop the beautiful head of a turn of the century French miss. I was swooning. (A gorgeous hat will do that to a woman.)

Not a great film, certainly, nor one overly brilliant or inventive, but still, worth a viewing or two. I didn't know what to expect, but what I got was just about right.

The Netflix crowd warns strongly NOT under any circumstances to watch the dubbed version of the film, so I'll go along with that. I dislike dubbed in mish-mash anyway. I love hearing the French language and don't mind at all reading the sub-titles. The film is currently available for streaming.

Since this is Tuesday, don't forget to check in at Todd Mason's blog, Sweet Freedom, to see what other films, television or audio/visuals other bloggers are talking about this week. Todd has all the relevant links.