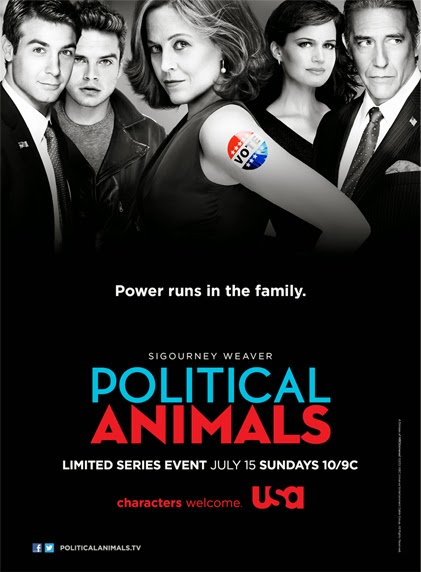 This is a strange post I suppose, since I'm going to recommend (more or less) a show I don't actually like. But as usual (more or less) there's method to my madness. 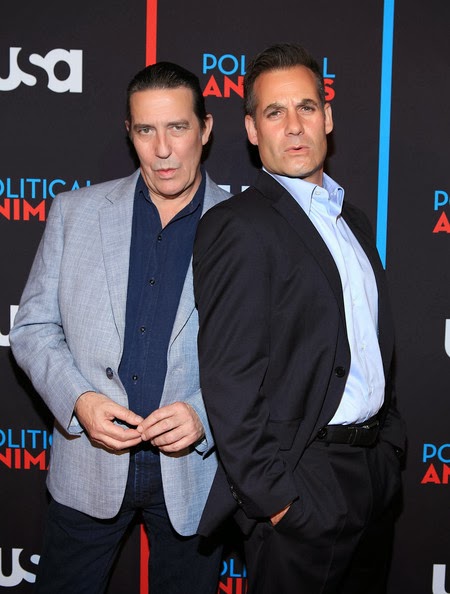 I stumbled over the 2012 mini-series POLITICAL ANIMALS (a show created by Greg Berlanti and shown on the USA Network) on Netflix the other day. Didn't know what to expect since I'd never heard or read about it. But I'm a big fan of Irish actor Ciaran Hinds. (Can't do that accent mark over his first name.) 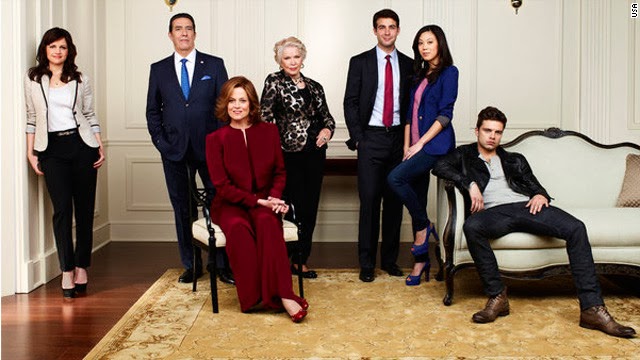 So, settle in here we go.

Steely-eyed, steely back-boned Elaine Barrish (Sigourney Weaver) is an ex-First Lady (now divorced), ex-Presidential candidate and current Secretary of State to current President Paul Garcetti (the wonderful Adrian Pasdar whom some of you may remember from HEROES). She seems to be meant to be the power behind the throne even if she and Garcetti have a vaguely rocky relationship. He recognizes the power and hunger (for more power) in her as well as (curse it!) her extreme competence and she recognizes that it should be her and not he in the Oval Office. 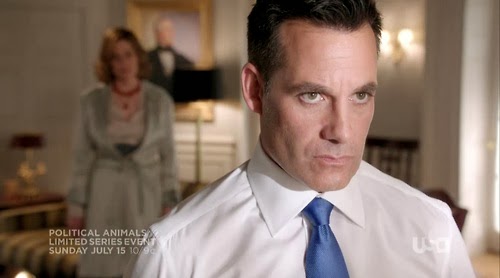 What with one international crisis and another, Barrish is constantly maneuvering to step in and save the day. Naturally she is not beloved by any of the President's staff. She shows contempt for the Vice President. In fact, in some scenes she appears to ride roughshod over the President himself (I suppose that's to show that he's a basically mellow guy and she's not). Now I don't know about you, but I don't think that's how things are handled when you're in the same room with the most powerful man in the world. But I could be wrong. It does, however, have an odd MacBeth and his Lady vibe to it. Perhaps unintentionally.

Let's get immediately to it: I hate to say this because I'm a fan, but Sigourney Weaver is the basic over-reaching weakness of the show. Not only is she not very likable or even sympathetic, but her character seems ill-conceived and worse, badly dressed. 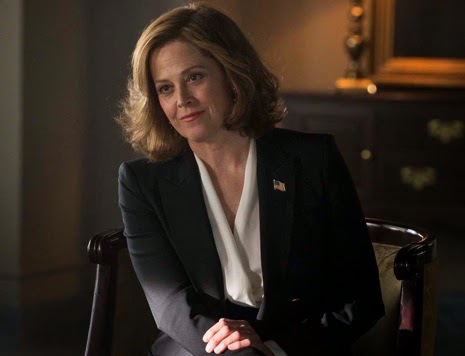 Obviously she's a Hollywood version of Hillary Clinton and that's okay. But apparently Weaver isn't really in love with the part except, maybe, on the surface. (Blame the writers for not giving her much to work with I suppose.) Oh she can chew the scenery with the best of 'em, but it's all one-note acting 101 and nothing deeper.

Barrish is saddled, in the show, with two sons: one is the requisite gay character who is also the requisite addict in the family. The other works for her as an advisor. Neither of these actors are handed much to do and neither of them does what it is they're handed with any degree of charm or more than passable acting talent. In fact both are physically rather interchangeable and it's easy to mix them up. But enough about them.

There's also Carla Cugino as Susan Berg, a wanna-be-powerful reporter (with only one Pulitzer, for goodness' sake!) who (in the pilot for the show) has something on Barrish which she's holding in abeyance if Barrish would only let her [the reporter] follow her [the Secretary of State]around for a week and write up the behind the scenes stuff. Unfortunately the so-called secret Berg is holding onto is really not all that earth rattling although we're given to think that it is. Berg also has her own unsatisfactory private life to deal with and we're thrown briefly into that in some futile effort to round out her character or maybe earn our sympathy.

Then there's the marvelous Ellen Burstyn as Barrish's mother, a thankless part with nothing much to do other than drink cocktails and spout nasty-isms at her daughter's enemies. What a waste of a brilliant actress. (And yet she won an Emmy for the part. Go figure.)

Now you're probably saying to yourself at this point: Yvette it sounds like the show is a total dud. 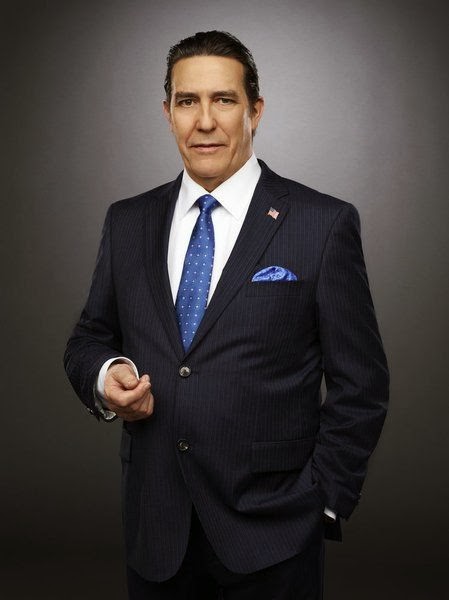 I may be overly prejudiced in his favor, but Hinds as ex-President Bud Hammond is the real star of the show and should have been labeled as such. The man steals everything that isn't nailed down. Oh if only the show were set around him minus the excess baggage of that dreadful family. Here he plays what is obviously meant as a caricature of Bill Clinton (himself occasionally a caricature of himself) with such gusto, such joie de vivre, such over-the-top mannerisms that he might, just might be accused of over-acting. (Ah, what do they know!?) But in my view, he stops just short.

Hinds is absurdly, ridiculously wonderful. And you might ask well what has he done with his heretofore very pronounced British accent? Well, hold onto your hats ladies and gentlemen, Ciaran Hinds has somehow fashioned the most cunning Southern accent since, well, since Bill Clinton himself.

Remember the Ciaran Hinds of Jane Austen's PERSUASION? Remember him as Mr. Rochester in JANE EYRE? Remember him as Dumbledore's brother in the last Harry Potter film? Remember him as Julius Caesar on the BBC? Remember him in Susan Hill's THE WOMAN IN BLACK? He also stars, I think, in a British spy drama, ABOVE SUSPICION for the ITV network.

Remember all those calmly powerful British stiff-upper-lip performances - wonderful as they all are/were? Well, they all disappear, lost in a haze of incredulity, once you view Ciaran Hinds as the outrageously odious ex-President and Womanizer-in-Chief. ("Just call me Bud.")

He makes you cringe as he leers at his soon-to-be girlfriend's amazing cleavage. He is SO obvious and over the top. But all the while you're laughing and admiring his bravado, his chutzpah, his guts and gusto, his flagrant self-indulgence, his infamous gift for self-aggrandizement.  "I am the most beloved ex-President since Kennedy!"

No, the show isn't meant to be a comedy, but Ciaran Hinds turns it all into black comedy. He is simply appalling, wonderfully so. (Though he can tone down, as when visiting his troubled son in the hospital.)

I dipped into the six episodes here and there, just to watch Hinds strut his stuff as the most atrocious philanderer since I don't know when. Yes, there were only six episodes thank goodness. But what there is of Ciaran Hinds is worth the price of admission to a show that without him would have been just another political soap opera, desperately dull, full of stock characters, badly written and cast (except for Hinds, Burstyn and Adrian Pasdar). Though in the end, even Hinds, as delightfully raunchy and unprincipled as his character is, can't save a bad show.

Since it's Tuesday, don't forget to check in at Todd Mason's blog, Sweet Freedom, to see what other forgotten or overlooked films and/or television (or other audio/visuals) other bloggers are talking about today.
Posted by Yvette at 9:30 AM