And another book: LIFE AFTER LIFE by Kate Atkinson 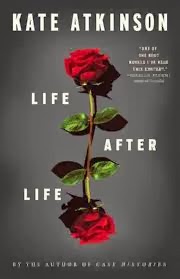 I'd heard the buzz about this book for months and thought, well, really, how good can it be? I mean, people were gasping for air, grasping for new superlatives. You know how that can turn a person off a book really quickly. I don't know exactly why but for me, it's this: I tend to get suspicious. I think we all would like to believe that we're not really part of the crowd. We're unique. Therefore our reading experiences must be unique. If everyone else loves a book then we're going to hold back. Sniff the air a bit.

Kate Atkinson's LIFE AFTER LIFE is a masterpiece of inventive story-telling. Pure and not so simple.

I'm not saying it's a perfect book, no, there are things about it that rankle. But rankling makes you think and a book this well written, any book this - yes - this uniquely conceptualized and crafted (by an obviously gifted writer having the time of her life) doesn't come down the pike very often.

The crowd is occasionally right - a humbling thought.

I read  LIFE AFTER LIFE in two nights. Couldn't put it down. It's a bit over 500 pages, but it's do-able since some of the pages are only a few paragraphs.

It does take a bit of getting use to, this strange odyssey of Ursula Todd, a young woman with many lives to live. It is winter: 1910, when Ursula is born during the middle of a snowstorm and quickly dies, strangled by her mother's umbilical cord. Blackness descends. Then again she's born and lives - this time the doctor arrives in the nick of time. Her life reaches a certain point and she dies again. Then she is born once more and lives to go on to yet another life until she dies again - we go back and forth and back and forth. As I said it does take getting used to. It took me a few chapters but I eventually caught on.

Each of Ursula's lives is peopled with friends and family whom we grow familiar with over time and whose different fates await alongside Ursula's - some of these fates are ugly, some are heart-breaking, all seem excruciatingly real. One of Ursula's own fates shows her up to be a relatively stupid young woman whom it is difficult to like or sympathize with. Another shows her to be quite heroic and exceptional. In yet another she is an abused wife. In another she is...

Ursula ('little bear' as her father Hugh - the most likable character in the book - calls her) is relatively unaware of this multiplicity of existence, though she is occasionally given to strange behavior and moments of deja vu. As when still a child, she  pushes the family maid Bridget down the stairs (breaking her arm) to save the girl from some dreadful fate which Ursula is only vaguely aware of.

She is sent by her mother, Sylvie (the most enigmatic character, I think, in the book) to a psychiatrist who specializes in difficult children. He is as odd and in a way, as fascinating a character as Ursula. Dr. Kellet believes that the child may be remembering other lives . 'Time is a construct, in reality everything flows, no past or present only the now.' Hardly the sort of thing that would make sense to a ten year old girl, and yet somehow it does.

What if we could go back and do this or that differently? Who hasn't thought that once or twice? Who hasn't wished for it? What if there were a way to alter reality? For that matter, which is the reality? Ursula Todd gets to go back, keeps getting to go back, but remains unaware except for a fleeting familiarity or the occasional sense of dread. It is only near the last third of the book that she becomes convinced that she's done all this before -  near the end when she attempts to save the world.

In LIFE AFTER LIFE, Atkinson has written as good an account as I've ever read of the horror of the London blitz during WWII when Germany, beginning in 1940, bombed London consistently for fifty seven days and normality was completely overshadowed by the daily threat of imminent death and destruction. One of the accounts of the war is written from the point of view of an Ursula who has married a German lawyer, gotten German citizenship (?!!) and been forced to remain in Berlin during the war.

Most of the characters in Ursula's immediate circle (or many circles) are well fleshed out, but it is her family and friends, the fates of the different members of that circle, that capture the imagination. Atkinson writes children very, very well, she fashions a comfortable English country childhood for Ursula and her brothers and sisters, an almost idyllic childhood punctuated by dark moments: the body of an unknown child is found discarded in a pig trough, Ursula drowns at the age of four while on holiday with her family at the seaside. A few pages later, a lifetime later, she is rescued by an artist painting nearby.

This is not a novel you slip into surely and quickly, you may have the same confused feelings as I did for the first few pages, going back and forth, trying to figure out what was what. But this only lasts for a moment or two and thereafter comes the reward. You just have to trust that Atkinson knows what she's doing and knows where she's going.

It is true that in way, the author is playing tricks on us as Francine Prose says in her NY Times review of LIFE AFTER LIFE, she [Atkinson] is having fun with this novel, 'which is as much about writing as it is about anything else.' Yes, I agree.

To read more of Francine Prose's 'take' on LIFE AFTER LIFE, please check out her excellent review (from April 2013) in the NY Times here.