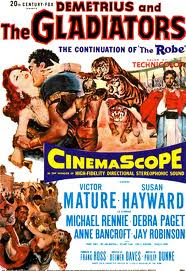 Since Easter is practically around the corner, I was suddenly in the mood to see an ancient Roman potboiler. You know the ones I mean, 'religion-themed' spectacles foisted upon us in the 1950's in the guise of observing the holidays - Hollywood-style. Never missed a single one.

We were impressionable kids then and we got swept up in the giant Cinemascopic dazzle. These movies had a tendency to make me feel very virtuous if not just a little bit guilty. Maybe I enjoyed them too much?

But I mean, all that leather, all that sweaty muscle on display, all that valor and religious fervor, not to mention handsome men in flowing robes, gladiators in mini-skirts and harnesses, dashing Roman soldiers on horseback, dancing slave girls, the Praetorian Guard, beautiful marble villas, all on display to the tune of a stirring stereophonic soundtrack. Well, resistance was futile.

DEMETRIUS AND THE GLADIATORS (1954) is a film directed by Delmer Daves, screenplay by Philip Dunne based on characters created by Lloyd C. Douglas in his novel, 'The Robe' and starring Victor Mature and Susan Hayward. It is the sequel to the film version of  'The Robe' (1953) starring Richard Burton, Jean Simmons and Victor Mature (Demetrius).

DEMETRIUS AND THE GLADIATORS begins just after the ill-fated martyrs Marcellus (Richard Burton) and Diana (Jean Simmons) - Christian converts - have bravely met their fate after handing off  'the robe' of the crucified Christ (picked up by Demetrius at the foot of the Cross) to a friend in the crowd.

The cast in the sequel is as top notch as in the original if you don't mind the over-the-top style of acting peculiar to these sorts of stylish extravaganzas.

Victor Mature, who surely possessed the most expressive forehead in show biz, repeats his role as Demetrius, the freed Christian slave who can't seem to stay out of trouble. Was there ever a craggier face in the history of movies? (Maybe Charles Bronson.) I love the guy. 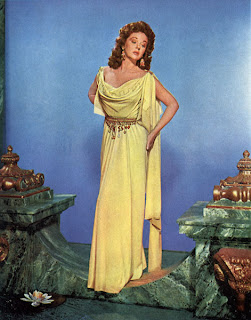 Susan Hayward is Messalina (who in historical reality was a nasty piece of work), scheming wife of old Claudius (wonderful Barry Jones), who is uncle to crazy Caligula (hey, these guys were all related, not that that ever gave them any protection - in fact it soured the entire gene pool). Susan Hayward was an old-school actress, a red-head who generally played the same character in every movie she was in: the diva. I mean, she just couldn't help it. Heaving her bosom and petulantly slinking around, she plots to get Demetrius into her bed. I always felt Hayward was posing rather than acting. But you couldn't help liking her anyway. She had a great career and won an Oscar playing a gun moll in I WANT TO LIVE.

The aforementioned crazy Caligula is played in his own inimitable tooty-fruity fashion by Jay Robinson who also repeats his role from the earlier film. To witness this performance is never to forget it. You'll know what I mean if you've seen it. If you haven't, you're in for a treat. 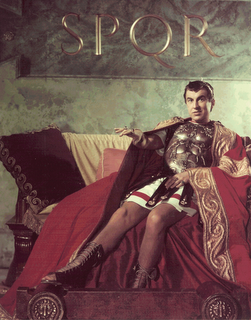 No wonder the Emperor's own Praetorian Guard put an end to his rantings and ravings with a well-timed spear. Even they had had enough. (I hope I'm not telling you something you didn't already know.) That's how the very patient Claudius finally becomes Emperor, by the way.

When Simon called Peter (the always terrific Michael Rennie also repeating his role) gives 'the robe' to Demetrius to keep for him (he's going out of town), Demetrius doesn't realize how that simple act will involve him in a total Christian vs. Roman melt-down. 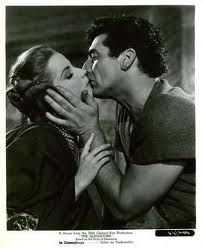 When the Roman soldiers show up (they're hard to miss since the guy in front has these huge kettle drums keeping beat with the feet of the marching men) Demetrius gets into a brawl protecting his girlfriend, the innocent Lucia (starlet Debra Paget who really looks much too young for Victor Mature, but I digress). 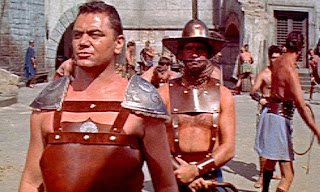 Demetrius is then hauled off to the local gladiator school where the no-nonsense Strabo (Ernest Borgnine) runs things - he's an ex-gladiator himself having earned his freedom by killing a bunch of guys in the arena.

At the school, Demetrius meets Glycon (the imposing William Marshall), a larger than life gladiator who becomes a friend (if you can make a friend of a person whom you might be called upon to kill at any moment) and the vile Dardanius (the very nicely muscled Richard Egan) who will feature in an act which will cause Demetrius to abandon his faith, if only temporarily.

But, as usual, I'm getting ahead of myself.

The gladiator school is conveniently owned by Claudius (remember he of the scheming wife) who drops by one morning with Messalina. She tells the men about her plans for a send-off party at which the gladiators are invited to make merry before half of them die the next day. Scoping out the men, who should catch Messalina's roving eye but - you guessed it - Demetrius.

When he claims he won't fight no matter what, Messalina instructs Strabo to put Demetrius in the arena the following morning even though he's just entered training.

Of course, Demetrius survives the morning's festivities and refuses Messalina's obvious advances, to her chagrin. When the next party time comes around - the night before another day at the arena spearing men and tigers and whatnot - the innocent Lucia (remember the girl friend?) sneaks in with the help of one of the women of ill-repute (Anne Bancroft) to find out if Demetrius is all right, never having heard what happened to him.

When she is grabbed by the nasty Dardanius (Richard Egan) in an attempt (1950's style) to debauch her innocence, Demetrius is dragged away by the guards before he can help her.

Lucia collapses in Dardanius's arms and we assume she has died from shock. These trembling innocent girls from the 50's had to be handled with kid gloves. At any rate, this barbarous act causes Demetrius to lose his faith in God. 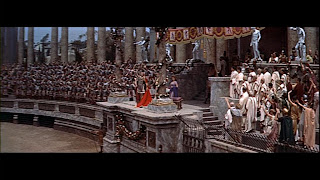 He becomes the top killer gladiator of all time to the delight of the cheering Roman crowd, skewering five men at a time and even going so far as to kill three tigers who have been let loose in the arena by the always fun to watch, crazy Caligula.

Demetrius then reports for duty to Messalina's bed chamber and before you can role your eyes, they're up to hanky-panky at the old villa by the seaside (dancing slave girls included) away from Claudius's prying eyes. (Though as a husband, Claudius appears rather tolerant of his wife's fun and games.)

How Demetrius finally gets his faith back and eludes yet another of crazy Caligula's temper tantrums is the best part of a film which not only has a terrific feel-good ending but we get to see the cruel despotic Emperor FINALLY getting his just deserts. Not that there was ever any real happily ever afters in the good old days of the Roman Empire, but we can pretend for a moment or two.

You don't need to have seen The Robe to make sense of DEMETRIUS AND THE GLADIATORS - Netflix has it on DVD in a very good print.

Tuesday means Overlooked or Forgotten Films day around here and over at Todd Mason's blog, Sweet Freedom. So don't forget to check out the links Todd is kind enough to list every week.

P.S. I couldn't help but wonder at the vagaries of fate. Of the entire cast of DEMETRIUS AND THE GLADIATORS, far as I know, it would be Ernest Borgnine - in reality - who would outlive them all. (He passed away in 2012) He was hardly the physical type one would have picked for longevity, but I guess he had great genes.