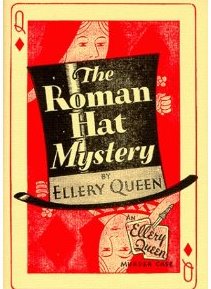 This is the first Ellery Queen book, first published in 1929. I probably read it when I was a kid (I used to read all this stuff way back then though most of it has been erased from memory) and while I know that Ellery Queen can be an acquired taste, I thoroughly enjoyed THE ROMAN HAT MYSTERY, anachronisms and all.

Oh, it is a very dated piece of work, in fact,  just the hat thing alone could not happen today. But perhaps there might be another article of clothing which could be substituted in its place so that the crime itself - complete with obscure poison - could work in some fashion or other.

At any rate, keeping that in mind, the story is still clever and the setting a lot of fun. The plot is filled with colorful New York characters of the sort you might find in a screwball mystery of the thirties. Unfortunately, the story is also complete with racial stereotypes which are pretty cringe-worthy. But I shrug my shoulders and skip along always reminding myself that it's 1929 and most people weren't as enlightened then as they are today...ahem.

Murder most foul occurs in the orchestra seating section at the Roman Theater while onstage the aptly named production of  GUN PLAY is in full swing. (Next to a small English village setting, I love a theater murder.) Monte Field, a well known and rather scurvy legal shyster has been found dead in his seat. It doesn't take much strenuous investigating to find out that Field was a blackmailer as well as a crooked lawyer.

When Inspector Queen is called in - he takes all the high profile cases - he and his son Ellery have trouble at first making heads or tails of the one main clue: Monte Field's top hat is missing. After a substantial search, it has apparently disappeared. In those days men ALWAYS wore top hats with their evening clothes - so this is, indeed, a strange occurrence.

Part of the reason I enjoyed the story so much, by the way, is this insistence on clothing etiquette and the whole idea that people used to dress to the teeth to attend the theater.

I like the warm camaraderie between the elderly Queen and his persnickety son. Though I must admit that a little bit of Ellery goes a very long way. (One thing I do love is that he wears prince nez instead of regular eyeglasses.)

Both men live in a large apartment house with one devoted servant - an energetic boy named Djuna. Djuna is apparently of some minority persuasion though his ethnicity is not made clear. I assumed he was someone the Queens picked up on a case along the way. (I guess in those days it was possible to do that sort of thing.) A few unflattering comments (and comparisons) are made about this quirky member of the Queen household though everyone apparently likes the boy (but who the heck is he?) and I suppose admire the Queens for taking him in. It's all rather obscure.

In today's world, the whole living situation of these three would seem a bit strange, but those were different times. The fact that the boy curls up in a corner like a pet doesn't seem off-putting to the Queens - in fact, everyone rather chuckles at Djuna's eccentricities.

At any rate, back to the story: It is obvious that for mysterious reasons of his own, the killer must have either hidden the missing hat or walked out with it late into the night. Obviously, the hat must hold a clue to the identity of the murderer. The cause of death too is rather mysterious - poison. But not just any old poison, something I've never heard of (and why would I?) distilled from gasoline. This was in the days of wood alcohol causing many accidental poisonings, but Monte Field's killer was a bit more creative and daring.

MYSTERY OF THE ROMAN HAT is a strict whodunit with 'fair play' clues posted along the way and a goodly cast of characters - several connected with Monty Field's lucrative blackmailing past time just happen to be in the theater on the night concerned. So lots of suspects, lots of clues. This was in the day when women got hysterical and often collapsed at the drop of a hat so there's some of that as well.

But the so-called 'fair play' sprinkling of clues isn't as fair as the authors imply in the end. Near that end, we even get a pause which asks us if we have figured out who the killer is yet.

And it turns out that Inspector Queen and Ellery figured out early on who the killer must be but kept that info to themselves because there was no proof. Uhuh.

Well, guess what, I figured it out on my own though I didn't pick the actual killer's name - I just knew where he must have come from and where the hat must be. But not because of any 'fair play' clues supplied by the authors. I just used my own common sense. Though there is a lot of obfuscation as there must be in mysteries of this sort, the whereabouts of the killer seems rather obvious. But okay, only after you read about halfway through.

In the end, the motive is a doozy - but probably one that wouldn't necessitate murder today. Although one never knows. Upper crust is till upper crust, I suppose.

Ellery Queen, by the way, was the pseudonym of two prolific cousins (from Brooklyn, no less) named Frederic Dannay and Manfred Lee.

To learn more about Dannay and Lee and their work, please use this handy-dandy link.

Also, don't forget to check in at Todd Mason's blog this week to see what other overlooked or forgotten books other bloggers are talking about today. Patti Abbot will be back at her hosting duties next week.
Posted by Yvette at 9:30 AM