The Eternal Question: What 10 Books Would I Want With Me If Stranded On A Desert Island? 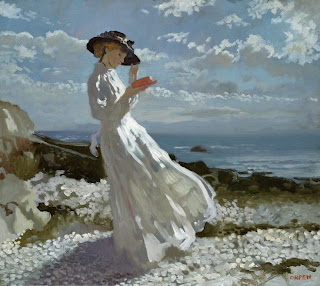 Don't know why but I've been thinking a lot about this lately - pondering before I go to sleep.

What 10 Books Would I Take With Me If I Were Going to Another Planet Never to Return?

Or - What 10 Books Would I Want With Me If I Were the Last Person Left in the World and all the Bookstores and Libraries Had Disappeared?

Or - What 10 Books Would I Take With Me If I Were Going to Spend Eternity in An Empty Diner?

Or - What 10 Books Would I Take With Me If Chosen to Be the Princess in the Perpetual Tower Surrounded by A Moat Filled with Ravenous Alligators?

Well, you get the idea.

Much as I would like to think that I'd take Shakespeare and be done with it. The truth is I wouldn't.
Shakespeare (a book containing all of his plays) would be my 11th choice if allowed.

Shakespeare's plays give my intellect a work-out, but they don't bring me joy. (Except for maybe Henry V's St. Crispin's Day speech.) I know, I know, I'm a philistine. So be it.

I'd want books with me that bring me some sort of joy (and a little warmth) as well as fire the brain's synapses.

So, without further ado: (That's probably from Shakespeare since he seemed to have written just about everything and in choosing other reading material I know I'll still be getting a bit of the Bard.)


My Ten Books For A Desert Island:
(At least as of today.)

1) PRIDE AND PREJUDICE by Jane Austen

3) WATERSHIP DOWN by Richard Adams

8) CROCODILE ON THE SANDBANK by Elizabeth Peters

What Ten Books Would You Want With You under the same circumstances?