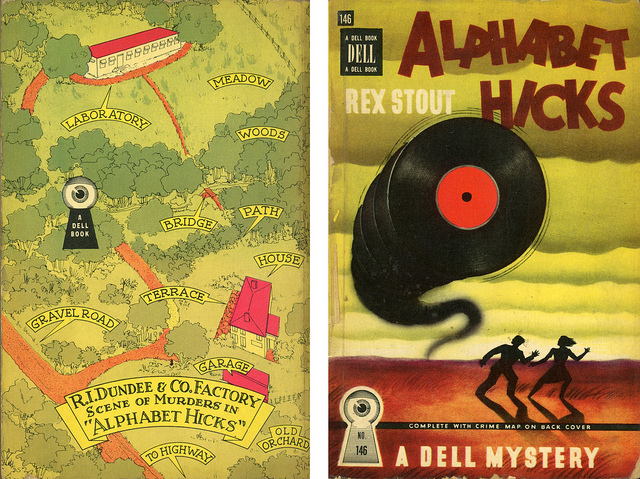 This is my first encounter with a non-Nero Wolfe book by Rex Stout. I was a little leery at first - would I miss Wolfe and Archie too much to concentrate on this other detecting hero with admittedly, a very catchy moniker?

(Those of you who didn't know that Stout wrote other stuff besides the Wolfe and Archie books, yeah he did. See, Rex Stout was a genius - he could do just about anything and did.)

I've read every Nero Wolfe book and re-read my favorites all the time. A habit I can't seem to break. It's all about the jaunty (and often very funny) chatter between Archie and just about everyone else in the world. It's the whodunit plots, the coziness of the brownstone, the inventive character names, the thousand orchids up on the roof, the welcome aura of a world long gone and the general all purpose misogyny of Nero Wolfe, the genius detective whom I adore.

Wolfe and Archie were born (created) to be together for all time and even now I think of them living in that brownstone on Manhattan's West Side, continuing to solve murders and whatnot - suspended in time. An idea that always makes me smile.

But the answer to the original question - would I miss them too much to read anything else by Rex Stout? The answer is: Nope, didn't miss them at all.

But before you shout, 'Fickle, fickle!' Let me just say in my defense that I can't help it if Stout was that terrific a writer. I was not even surprised by how much I enjoyed ALPHABET HICKS. Even if I did figure out early on who the killer was.

Alphabet Hicks is a disbarred lawyer kicked from the ranks of the law for telling the truth and damning the consequences. He now drives a taxi cab and solves crimes - sounds like a good plan to me. He's a big guy with a gruff appearance whom everyone refers to as 'Hicks' - well, you could hardly call him 'Alphabet'.

The reason for Hicks' unorthodox moniker is his tricky business card. The card simply states his name followed by a group of non-sensical letters the meaning of which is left up to Hicks to interpret (differently each time) when asked what the letters stand for.

The other took a wallet from his pocket, fished out a card, and offered it. Vail took it and looked at it: A. Hicks, M.S.O.T.P.B.O.M.

He looked up, unsmiling. "This-this hash?"

The other gestured it away. "Unimportant. One of my titles. Melancholy Spectator of the Psychic Belly-ache of Mankind. The name is Hicks."

Hicks is a philosopher. Odd for a lawyer, but maybe not for a disbarred one.

Hicks in his role as taxi driver is recognized by a fare, Mrs. Judith Dundee. She impulsively hires him on the spot to figure out what is wrong with her husband. He's been acting completely unlike himself lately - accusing her of selling company secrets to the enemy and claiming he has incontrovertible proof. She denies the accusation and Hicks sort of believes her. Need I add that she is a very attractive woman?

The so-called 'proof' soon disappears and the accusation is left hanging while Mr. Dundee foams at the mouth. Well, not really, but just about. To Dundee's chagrin, Hicks continues working for Mrs. Dundee. Hicks is halfway convinced there is some sort of plot against her.

He soon discovers that the 'proof' is in the form of a record or recording disc, a contraption used at the Dundee lab for dictation, among other things.

The lab is out in the Long Island countryside and the copy of the Dell book I have has a handy-dandy map on the back cover showing 'the scene of the murders'. And murders there are, almost as soon as Hicks arrives on the scene, having tailed a woman all the way from the city to the lab.

There are several suspects lurking about as the first murder happens right under their collective noses. The killing - by blunt instrument - of Martha Cooper, the young woman whom Hicks had been tailing. She'd been in Europe with her hubby and just arrived back. While visiting her sister, Heather Gladd, a spunky gal who works as a private secretary at the lab, Cooper is struck down by a foul villain.

A motiveless crime at first glance. Unless you count the fact that Cooper's speaking voice sounded exactly like Judith Dundee's voice, enough to fool even Ross Dundee, the son, who also works at the lab.

More murder follows as Hicks digs deeper into the connection between Dundee's accusations against his wife and the dead bodies down at the lab.

As I said, I figured out the killer early on (I've read A LOT of mysteries over the years) but I still very much enjoyed hanging out with the quirky, acerbic Hicks and two other members of the cast: a couple of young, mixed-up, would-be lovers caught up in the sordid plot, bickering all the way. Fun.

Thanks go out to my blogging buddy John, over at Pretty Sinister Books (my favorite blog title ever) for his initial review of ALPHABET HICKS - it piqued my interest Big Time. I also thank John for making the book available to me especially when I'd searched high and low and couldn't find a copy at a reasonable price.

I'm not sure if there are any more Alphabet Hicks books - I don't think so - but I would be happy to find out I'm wrong.

Don't forget to check in at Patti Abbott's blog, Pattinase, to see what other Forgotten (or Overlooked) books other bloggers are posting about today.