Dave, a film directed by Ivan Reitman and written by Gary Ross, is a lovely political fairy tale that works primarily because of Kevin Kline. He plays Dave Kovic, likable doppelganger to an unlikable President (also played by Kline). Despite a few glaring inconsistencies this is still one of my favorite political movies even if much of it is implausible.

Dave Kovic runs a temp job agency in Washington D.C. (not very well one is given to think - he gets too emotionally involved with his hard-luck clients) and on the side, play-acts the President - whom he is the spitting image of - in local commercials. His apartment in D.C. is much too nice for a guy who seems to be just getting along in life trying to make others happy, but maybe he inherited the place. You know how Hollywood is about movie apartments.

At any rate, Dave's commercial activity has come to the attention of the President's aides and one night Dave comes home from work to find two secret service men sitting in his living room - one of them a very imposing Ving Rhames.

To Dave's surprise they want him to impersonate the Prez - just to wave at a crowd and be seen getting into a limo - while the actual Prez is off on some important government business (actually, dallying with his mistress - aka Laura Linney as Randi, a Presidential staffer).

It's all harmless and fun and something that doesn't strain Dave's ability. He is happy to help out.

But when, that same night, the Prez suffers a debilitating stroke in the arms of said mistress, his evil  Chief of Staff - a psychopath by the name of Bob Alexander (Frank Langella) and his co-hort Kevin Dunn (the very affable Alan Reed) pressure Dave into playing the President until Mitchell recovers and can resume his duties. What they don't tell Dave is that Mitchell is probably not going to recover - he is being held in medical sequestration in the upper reaches of the White House.

This part of the plan doesn't make much sense really - it all has to do with Alexander's hatred of the Vice President (Ben Kingsley) and his crazed unwillingness to hand over the reins of government. But as I mentioned in the beginning, this is really a fairy tale, so we shrug our shoulders and move on.

When Dave rightly asks, "What about the Vice President?"

Alexander replies that "...the Vice President is mentally unbalanced."

So for the sake of the country, Dave has to step in - at least for now. It is his patriotic duty.

There follows a very funny if very unbelievable crash-course in 'how to be the President'.

It also helps matters (at least at first) that the President and First Lady Ellen Mitchell (Sigourney Weaver) rarely speak. They have totally separate quarters in the White House and in truth, Ellen hates Bill's guts - she knows him for the philanderer he is. 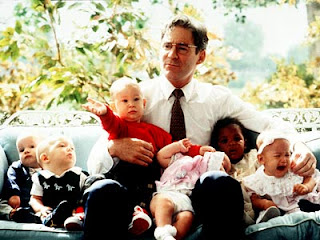 Everything goes along fairly well and it becomes apparent to one and all (the Washington press corps, the television pundits - all played by real-life reporters and commentators from the early 90's) that 'the President' has a new lease on life. He is not only more out-going than Bill Mitchell, but infinitely more likable.

There are some touching moments showing 'the President' winning the hearts of the people without really trying. Dave is just a naturally sweet, empathetic sort of guy - very different from the real Bill Mitchell who is not only a phony and a double-dealing jerk, but a crook as well.

Dave seems instantly smitten by the First Lady and who can blame him? It is Sigourney Weaver, after all. Ellen herself begins having second thoughts about her hubby. He seems so different. The two grow closer but not before a very funny shower scene and a couple of other awkward encounters.

What happens next I won't reveal except to say that Charles Grodin in his usual winning way steals the scenes he's in.

He plays Dave's accountant buddy Murray Blum, whom Dave calls in to help balance a tricky budget bill, much to the consternation of Bob Alexander and the President's staff. (Frank Langella is quite funny as the stiffly walking psycho with beady evil eyes and delusions of grandeur.)

As Dave begins to feel (and exert) his power, rightly realizing that he doesn't have to tow Alexander's line, he makes a powerful enemy out of the chief of staff - especially when Dave has the temerity to fire him. (A very satisfying scene.)

What happens next I won't reveal, except to say that it all works out for the best even if the actual ending makes little sense - politically speaking.

There are several things in this movie that should have worked better: Charles Grodin could have had more to do. He is SO wonderful. Ben Kingsley too just basically stands around. Ving Rhames could have handled more as well, though he has a really nice scene with Dave in an ambulance near the end.

Also, can it be true that there is a secret underground entrance to the White House? An entrance that leads to a small park - complete with bubbling fountain - across the way? If so, it's a secret no longer.

This review is my entry in Tuesday's Overlooked (or Forgotten) Films hosted by Todd Mason at his blog, Sweet Freedom Don't forget to check in and see what other films, television or audio/visual material other bloggers are talking about today.
Posted by Yvette at 9:30 AM