Tuesday is Overlooked Films (and other A/V material) Day - used to be Forgotten Films Day but it's changed. Either/or, it remains the day we talk about films overlooked or forgotten or otherwise ignored. For all the pertinent links, please check out Todd Mason's blog, Sweet Freedom.

EAST OF EDEN, a film directed by Elia Kazan (based on the novel by John Steinbeck) and starring James Dean, Julie Harris and Raymond Massey, was a hit in its day. A film not so overlooked as forgotten.The critics raved. James Dean's enormous talent lit up the screen and he was nominated for an Oscar (and probably should have won) posthumously. When people talk about Dean, they mostly talk about REBEL WITHOUT A CAUSE or maybe, GIANT. But for me, it's always been EAST OF EDEN.

I saw this in a theater as a teenager and cried my eyes out - partly because of the haunting musical score (I can still hum it) by Leonard Rosenman. Except for Marlon Brando in ON THE WATERFRONT (1954), I'd never seen Dean's sort of acting before. This was all new and for me, a revelation. What we might take for granted today, was brand new back then and it was spellbinding. In a way, James Dean affronted us with his brilliance and occasionally made us uncomfortable - yet he dazzled.

The film is set in or near the Salinas Valley, California on the eve of WWI and the story based on the last third (or so) of Steinbeck's book. The screenplay concentrates on the theme of father/son relationships, in this case a very tortured relationship. Raymond Massey plays Adam Trask, a man with two sons, one good, one bad. (For Trask, everything is seen in black and white.) He is a man whose bible-thumping righteousness blinds him to the worth of one son in favor of the other.

Trask is also a man who harbors a deep, dark secret about the boys' mother who disappeared years before. His sons have been led to believe their mother was dead, but Cal Trask (James Dean) has discovered her running a whore house in a nearby town. Surprise.

The steely-eyed, hard-hearted Kate is played by Jo Van Fleet in an incredible Oscar winning performance. 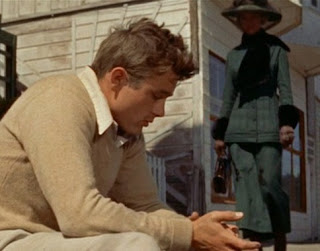 Cal is the rebellious son who harbors a dangerous curiosity about his mother despite his father's attempts to disguise the truth. Richard Davalos plays Cal's naive brother Aaron, the good son who believes their mother was a saint but whose anointed place in the family is threatened by Cal's jealousy and misguided attempts to earn their father's love. 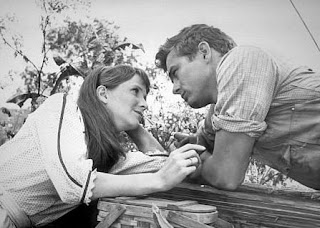 The wonderful Julie Harris plays Aaron's girlfriend Julie, whose confused feelings for Cal lead to an ugly confrontation as Cal turns more and more to her for comfort as his father spurns every effort Cal makes to try and please him.

Elia Kazan's guiding hand makes sure that the story stays on track and doesn't completely veer off into the melodramatic though Steinbeck's original story of good and evil does have several over-the-top moments. Kazan handles the different acting styles of James Dean, Julie Harris, Raymond Massey, Richard Davalos and Burl Ives (as the Sheriff), very well. (Of all the cast Julie Harris comes closest to matching Dean's 'method' style.) 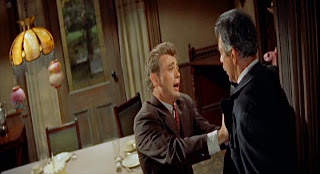 There is one scene when Cal and his father confront each other on the elder Trask's birthday which defines clearly the difference in each actor's technique. From reading about this scene I understand that Massey was taken aback by Dean's physicality but the camera kept rolling so he had no choice but to go with it, not knowing what to make of Dean's howl of grief. It's a powerhouse scene even if the Massey story is apocryphal.

The ending is tragic though not entirely hopeless. Brother confronts brother in another horribly memorable scene as a mother's true nature is revealed and the two sons' strength of character (or lack thereof) comes into play.

If you've somehow missed this movie, it's readily available everywhere these days.