Saturday Salon: 10 Male Portraits I Would Love to Own 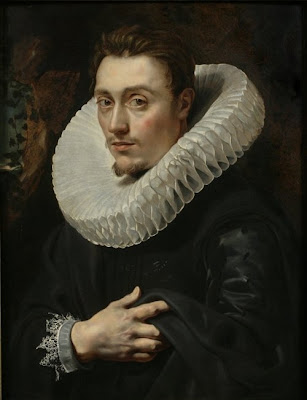 What I love about this painting, besides the flawless technique, is the eyes. That look in those eyes make the sitter come alive even after so many centuries. It's a very modern-seeming look. 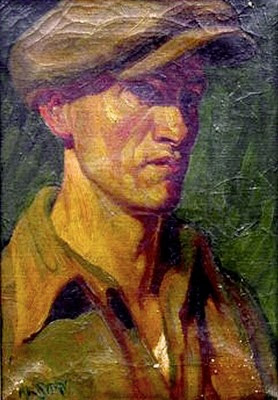 When I first saw this painting I thought, aha! that's Saul Panzer in the flesh. (For the uninitiated, Saul is the best operative in NYC according to Archie Goodwin and Nero Wolfe.) The more I look at this though, the more I like the painting just for itself. It speaks volumes about the way certain men looked in the early part of the twentieth century. This has the look of the Depression era all over it. 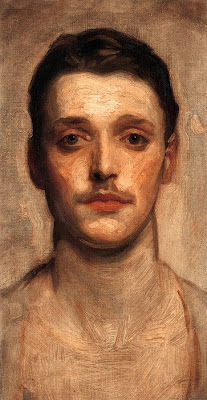 Simply gorgeous, gorgeous work by a master of the brush stroke. This almost seems done extemporaneously and possibly it was. If you look closely you can see the mastery of color and technique which absolutely dazzles. Of course, Sargent had an eye for handsome young men and I, for one, am happy to view the result. 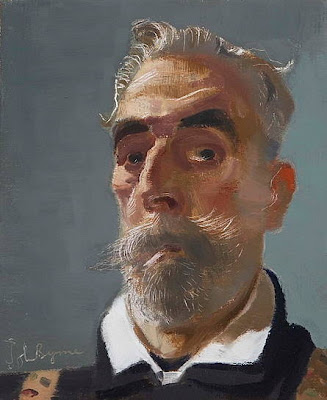 I love the granite attitude and craggy look of this guy. Note the sweetly sculpted hair atop the otherwise grizzly face with its 'yeah, what about it?' attitude. Check out his website for other attitudes and paintings. 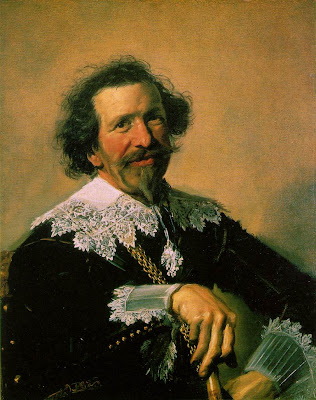 This is a repeat of a portrait I've featured before simply because it happens to be one of my very favorite paintings and I can't NOT include it on my list. I love most of all the appearance and attitude of the sitter. He is simply someone you'd want to know - the man has such a look of kindness. He seems content even with his scruffy hair.Technique-wise:  look at the  lace and that gorgeous hand, missing I believe, a pinky. I used to think it was bent under, but now I don't. 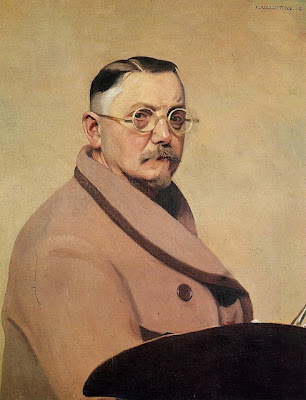 Monsieur Vallotton seems a bit grumpy but he still manages to capture the attention. When I look closely at this painting I note the gorgeous work on the gown, the brushstrokes on the face and the unsparing way the painter has captured his aging countenance. I don't mind the bland simplicity at all because if you look closely you'll see quite the opposite.

Chase was an artist who effected theatrical style and obviously it suited him. I like how Beckwith captures him in all his sartorial flamboyance and makes him look imposing and even dashing. Though to my eye there is very little swagger going on. 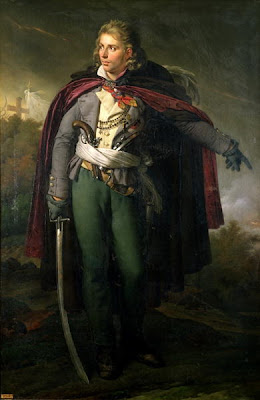 Despite the name this is the work of a male painter who was in at the beginning of the Romantic Movement and famed for his portraits of members of the Napoleonic family. This painting is apparently romanticizing elements of war and makes a dashing fellow of Monsieur Cathelineau but the truth is, I don't know that he wasn't. I like the flamboyant swagger of it. As you can tell, I'm fond of flamboyance. 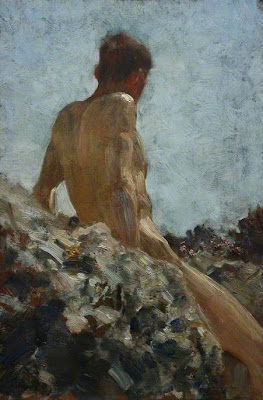 I wanted to include a nude and this is one of my favorites. I love the application of paint, the many shades used in the skin tone by Tuke who had a reputation (and facility) later in life, for painting naked young men. I think men can be painted unclothed in just as decorous a fashion as women. Tuke glorified the natural male nude in a quiet simple, mind-your-manners sort of way that I find quite beautiful. None of John Singer Sargent's posed 'in your face' sort of nakedness at all. There's room for both. 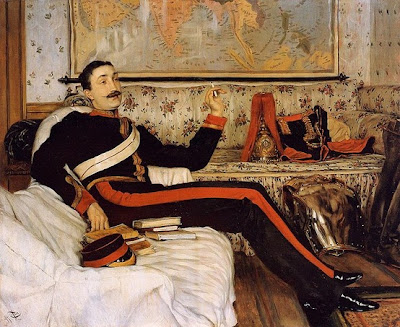 You've probably seen this painting before on my blog since it remains one of my all time favorites not to be left off a list like this. Burnaby was killed at the Battle of Abu Klea in the Sudan in 1885. In this painting, Tissot captures all of the flamboyant (there's that word again) Captain Burnaby's style and physical attributes. He was very tall and imposing and that seemingly endless red stripe on his uniform lets us know it. Obviously he was also a reader as the books on his right make apparent. He also, I understand, had a lisp which I find endearing if true. On the settee behind him to the right we see the rest of his colorful uniform and the map above shows us, I believe, the depth and breadth of the English empire.

Next week it will be 10 Female Portraits, so, as I like to say, stay tuned. Obviously I'd like to post many more than ten, but let's keep it feasible. When I look at these works closely I am usually overwhelmed by the painter's technique which, because I don't paint in oils, remains a total mystery to me. That's part of the process I suppose - being overwhelmed by technique. I don't want to know too much, I just want to know enough to understand that I am looking at the work of genius. These are very definitely an amateur's golly-gee-whiz comments by the way, I'm just a loving fan.
Posted by Yvette at 3:18 PM