Review: SPEAK OUT BEFORE YOU DIE by Jacqueline T. Lynch 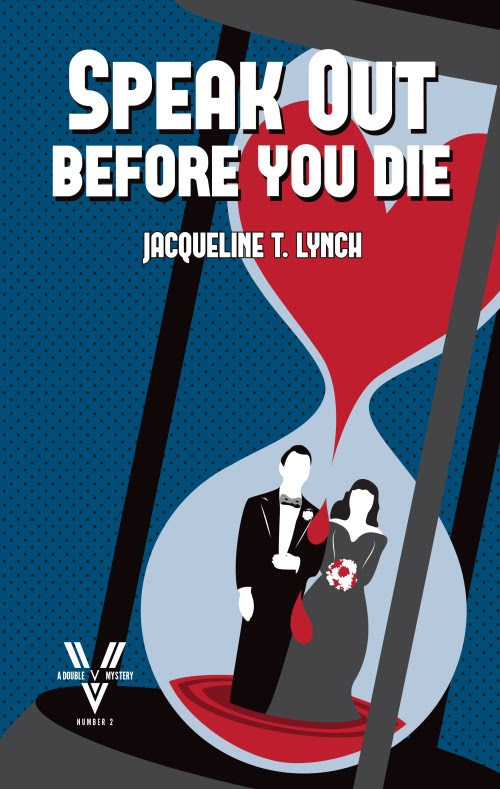 Jacqueline is, as many of you know, a fellow movie-maven blogger (Another Old Movie Blog) as well as a writer and, by the way, a great person. If you love vintage movies, Jacqueline's blog is a must-read.

SPEAK OUT BEFORE YOU DIE is the second book in the Double V series begun with
CADMIUM YELLOW, BLOOD RED which introduced the two protagonists, richy-rich divorcee Juliet Van Allen and ex-con and man of all trades, Elmer Vartanian. (When was the last time you read about an anti-hero named Elmer?)

It's been months since Elmer helped Juliet solve the murder of her duplicitous husband and the socialite and the ex-con turned janitor (possibly the only janitor/detective in the mystery biz) have gone their separate ways - sort of. But when Juliet discovers a threatening poem meant, she thinks, for her father on the eve of his marriage to a much younger woman, she turns to Elmer for help. He, though reluctant, drops everything (including a current gal friend) to help Juliet.

The time is 1949 and the setting is the Van Allen mansion in Connecticut during a winter storm. Don't you love it when everyone is trapped in a house with bad weather raging outside and inside everyone is busy letting their hang-ups hang out? Murder, of course, is part of  what we expect and though it takes a little while for a dead body to show up, we eventually get one and of course, it's up to Elmer to make sense of things.

Though Elmer spends most of the book disguised as 'help' - dropping trays and making a mess whenever he's in danger of being identified by any of the family (he's incognito), his real job is to observe the various guests on hand for Juliet's father's wedding and possibly stop an attempted murder. In between the snooping, Elmer and Juliet give each other googly eyes (though always calm, cool and collected) and each wonders how to take the next step in their 'relationship'.

In truth there is hardly any relationship and I do wonder how these two will ever get together. I mean, Elmer, though an ex-con is a very proud man and Juliet is...well, she's rich beyond Elmer's wildest dreams. I can't wait to see how this all works out in the future.

Okay, we have poetry, a planned wedding, a house full of guests, a possible threat, a pompous older man, a younger woman who may or may not be on the make, plus an assortment of society friends gathered for the nuptials during a storm. It all makes for an engaging cozy read if occasionally bit wordy and confusing (I had trouble keeping tabs on who was who) but I very much like the idea of Juliet and Elmer and the possibility of them as an improbable couple. I even like that Elmer is a janitor who solves crimes. Why not? (His ex-con toughness comes in handy, of course.)

But I wonder when Juliet will stop being wishy-washy and go after Elmer with romantic intent. She has to stop waiting for him to make the first move. It ain't gonna' happen.

Can the gulf between them ever be bridged in some logical sensible way? Stay tuned.

SPEAK OUT BEFORE YOU DIE is available in paperback as well as E-Book form.