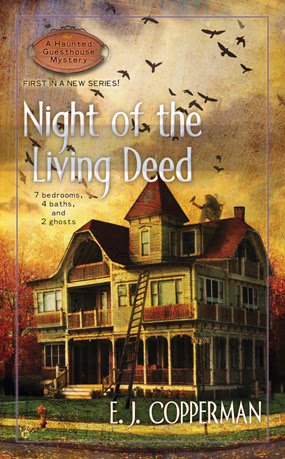 Divorced mom Alison Kerby has the great idea of restoring an old house on the New Jersey shore, turning it into a profitable guest-house ('...it's not a bed and breakfast!) and living there happily ever after with her nine year old daughter, Melissa.
Unfortunately two dead people are running interference with her plans. It seems the previous owner Maxie Malone and the private eye she'd hired, Paul Harrison, were found dead in the house. The police initially termed it a double suicide. The two ghosts who appear to Alison, insist they were murdered and what's more, want Alison to find out who did it.
Okay, sounds good so far - and it is. In NIGHT OF THE LIVING DEED, E.J. Copperman has written a charming cozy of a tale featuring a like-able main character, her equally like-able precocious daughter (and if you think writing children is easy, think again), and two ghosts with definite personalities of their own.
The whole thing is a romp as Alison is forced to investigate if she ever wants to have a moment's peace in her new place. Of course there's also a 'treasure' hunt. What would a haunted house be without a 'buried' treasure? In this case it takes the form of...well, you'll figure it out.
There are dead bodies, a bunch of suspects, threats to Allison and Halloween to deal with before we come to the satisfying conclusion. I am definitely looking forward to more in this series.
Posted by Yvette at 1:17 PM