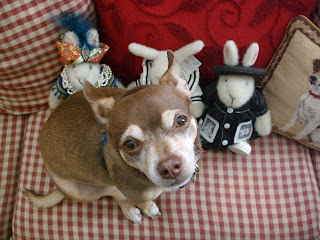 I couldn't go any further without posting a picture of the guy who shares my digs. His name is Rocky and I'm pretty sure he's pure chihuahua, though he is a bit on the large side - certainly not 'teacup'. My daughter calls him 'the sausage', but we scorn her criticism.

Rocky came from a home where he was being fostered, his original owners having washed their hands of him for whatever reason. (I suspect the reason, but never mind...)
He is a handful. I believe (and tell him often) he should sink to the ground everyday and thank the gods above that I found him and he found me and that by some miracle, I have the patience to deal with his eccentricities.
Who else would put up with him?
I can't imagine.
He is snarly, suspicious, occasionally snappy and a bit food aggressive
(but only when it comes to his treats - woe be onto you if you try to take one away from him) and still lunges at strangers in the street. I've never lived with a small dog before, it has been an education. All the dogs in my past were large and in many ways, easier to manage. Well, at least they didn't challenge every pit bull in the neighborhood to a duel as they pass by the house.
I'd never been bitten by a dog until Rocky - mostly in the beginning when I first adopted him about a year and a half ago. But my attitude is: hey, no body's perfect. And we don't really know what was done to him in his early formative years. (He was four when I got him.) He originally comes from Florida, I believe. Maybe the sun there fried his tender little puppy synapses.
Who knows?
Having said all that, he is at heart, an intelligent and affectionate dog. He is snugly, sweet (most of the time) and fastidious. He makes me laugh. I adore him. Yes, I truly do. I adore every suspicious little hair on his bony, bug-eyed head.
He smells good too.
"My little dog. A heartbeat at my feet." Edith Wharton
Posted by Yvette at 12:04 PM