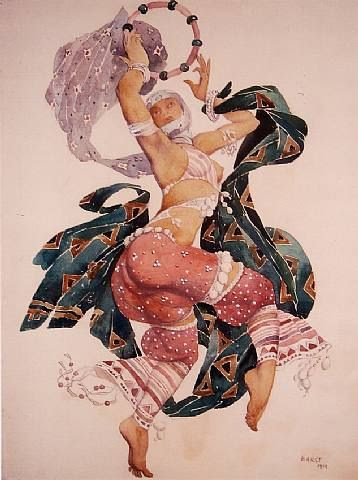 I was over on Facebook earlier posting pictures of the brilliant work of Russian turn-of-the-century designer, Leon Bakst, when a thought occurred: why not blog about it? Especially when Bakst is one of my favorite designers/colorists/painters and creator of all things bright and beautiful for the stage.
Bakst began his career designing theater sets. Early on he co-founded the journal, WORLD OF ART, with Sergey Diaghilev. When Diaghilev formed The Ballet Russes in Paris, Bakst became its costume and set designer. In 1919, Bakst settled in Paris permanently, gaining worldwide fame as a designer of exuberant costumes mainly in the Orientalist style. Since I am a major fan of Orientalist design and painting - its patterns, subject matter, colors and extravagance -
when I discovered Bakst's work years ago, naturally it was love at first sight.
How great would it be to earn your living designing spectacular costumes and sets for the theater or ballet? Certainly you'd be hard-pressed to discover anything more fun. Ah well, maybe in the next life.
Posted by Yvette at 7:12 PM