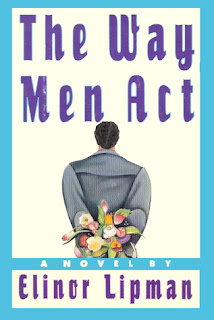 I'm not a big chick-lit fan, but even I can see that Elinor Lipman is not writing fluff. She's too talented for that. Her books are a witty barometric on, I suppose,  the day to day of millennials, pre-millennials and pre-pre millennials ( I forgot what the youngsters were called in the nineties) and how they live. Even if THE WAY MEN ACT was first published in 1993, it is very modern day in outlook or at least, that's how it seems to me looking backwards from an old lady's point of view. Truth to tell, 1993 doesn't really seem all that long ago.

Two of the Lipman books I read over the weekend actually feature characters in their late forties and early fifties, (THE FAMILY MAN and THE LADIES' MAN). But my official re-introduction to the author was THE WAY MEN ACT which features a younger cast of characters. I say 're-introduction' because I have read Lipman before. Years ago I read the well-reviewed THE INN AT LAKE DEVINE and liked it very much. But then I went to another book of hers and became disenchanted, hence my years long avoidance of her work.

But for whatever reason I recently declared myself ready to return to the fold and I'm glad I did. It may be that I am in a different place psychologically or whatnot, but I decided this past week or so to immerse myself in the world according to Elinor Lipman. Of the four books I brought home from the library, DEARLY DEPARTED, was the dud - in fact, I didn't finish it. But three out of four isn't bad at all.

Lipman has such a wry sense of humor and when it comes to modern day social behavior, her observational skills seem right on the money. She doesn't try to make her characters cute and fuzzy or even instantly likable. Her leading lady (ladies) are not faultless or perfect or innocent, they are complex modern women, warts and all. That threw me at first because I am very much of the 'once upon a time' school of boy/girl relationship story telling which generally features an engaging female waiting for a perfect ('perfect' being a relative term) man whom she will 'gentle' and settle down with.
I like that stuff when it's well done and I make no bones about it. (One of many reasons why I continue to read vintage books.) I'm very big on happily ever after. Sue me.

Anyway, in THE WAY MEN ACT, the main character, first and foremost, is the fictional small town of Harrow, Massachusetts. One of those perfectly picturesque New England towns full of eclectic shops catering to townies and tourists. There's a certain established 'look' to these sorts of towns, everyone on the street generally looks a certain way and everyone who lives there knows everyone else's business. But the truth is that these places, while lovely to look at in a picture postcard sort of way, can be intimidating to outsiders. To those that belong though, they can be a haven.

Melinda LeBlanc, at age 30, has (resentfully) come home to Harrow, tale between her legs. She is that rarity among contemporary heroines, a non-college grad with no real career path and no clue what to do next. At the moment she is a floral designer working in a shop owned by her cousin and his wife, a duo who have no sense of humor and no idea that Melinda's talents are the reason for their current success. Elinor Lipman is SO good at creating the sorts of people who are clueless about themselves.

The three main characters in THE WAY MEN ACT have all known each other since high school, though their lives have since then have gone in separate directions. Melinda, the once popular girl, shares a house with her mother, a widow who secretly has her eye on the local fish monger. Melinda's high school 'friend' Libby, a designer of unique (some would say, 'odd') women's fashions has also recently returned to Harrow to open a small boutique and pick-up the thread with a local guy with whom she believes she shared an unrequited passion back in the day. The guy in question is Dennis Vaughn, owner of Brookhoppers', a fly fisherman's paradise of a shop. Dennis was one of the few African American students back in high school and of the three or four major characters in the book, the most successfully content with his lot in life. Dennis' genius for creating fly fishing lures is well known and his shop, best-selling book and local radio gig attract fishermen from far and wide. Fly-fishing seems to be a sort of cult-like thing revered by those who indulge.

Anyway, turns out that Libby believes Dennis once ALMOST made a pass at her but she believes she rebuffed him because of his race. She now believes that she broke Dennis's heart and so has returned to Harrow to try and mend fences and give their budding once upon a time romance a fresh start. Unfortunately, Libby's beliefs are totally wrong. Dennis doesn't remember the so-called pass and/or subsequent rebuff and is hardly suffering from any broken heart.

His eye may be sort-of/kind-of on Melinda with whom he once shared a one night stand - the result of guesting at a wedding in which they both indulged in too much wine and surrendered to the general romantic vibe. At least that's the cowardly excuse Dennis uses (the old 'it's not you it's me' routine) for stepping back from any future entanglement. Naturally enough, Melinda is a bit displeased since she sensed that they might have been on the verge of 'something'.

At any rate, Melinda continues to bemoans her un-wed (at least her un-relationship) state. She, who was once the belle of the ball, is now forced to earn her living designing weddings for girls who once envied her popularity in high school. How the tide has changed. Not that Melinda isn't getting any action, she does have a now and then 'arrangement' with a guy who plays in a wedding band. But that's more a physical thing than anything else. Friends with benefits I guess you'd call it. Though the 'friends' part hardly even enters into it. Not the best side of Melinda's character I'd say. Though I must learn not to be put off by this sort of thing - young women are different these days. Get over it, Yvette.

In truth, Elinor Lipman fashions an amusing tale with wit and intelligence, not to mention a keen understanding of human nature. It's a story in which nothing much happens except that it does. Know what I mean? Though at first Melinda may seem a bit off-putting, you will soon get caught up in her life and the lives of her friends. What happens next happens naturally enough and the bumps in the road seem to occur as they do in life - with little author interference in the outcome. I do like books in which the author is absent and the tale seems to resolve itself organically.

A good read for a calm Autumn evening, maybe while sitting in a comfy chair with your feet up, a glass of wine by your side.

And since this is Friday, you know the routine. Don't forget to check in at author Patricia Abbott's website, Pattinase to see what other forgotten or overlooked books other bloggers are talking about today. (Just learned that Todd Mason will be hosting the links later on today at his blog,
Sweet Freedom )