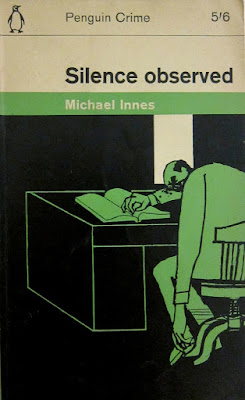 SILENCE OBSERVED (1958) is one of the more 'normal' of British writer Michael Innes' Appleby mysteries in that there's not a lot that you have to double-think about. On my first reading, I thought that maybe it was a bit dullsville. But on my second read, I realized that maybe I was the dullard.

This is a terrific whodunit art mystery and of course, we already know (or should know) that the erudite Inspector John Appleby has hidden depths of art expertise alongside his standard depths of esoteric literary knowledge. So no big surprise here when he recognizes all sorts of arcane bits and pieces and tucks them into conversation. If you insist on being off-put by this sort of thing, don't read Innes.

Otherwise you may be in danger of falling under the author's spell, as I was from the beginning and always shall be as those of you who regularly read my blog know. There's just something about a man who speaks as if having a fine brain is an unexceptionable thing. Of course there's always the danger of elitism, but that's not a deal breaker for me if I like the character - there are much worse character flaws. Besides there's very little of that in Sir John Appleby's make-up. (He was just plain John Appleby in the early books.) Wit and a true appreciation of art (especially the old masters) are very sexy character traits - at least to me. Of course it doesn't hurt that the aging Appleby retains his oh-so-dry sense of humor.

A sign stating SILENCE OBSERVED hangs imperially on a wall at the private London club where Appleby and a character named Charles Gribble, a collector of all sorts of things including acknowledged forgeries by well-known forgers (apparently that is 'a thing') not-so-silently get into a soon to be pertinent conversation. Gribble is showing off his latest find to an unenthusiastic Appleby, when he unexpectedly makes a humbling discovery.

I don't know about you, but I love the whole idea of these stuffy private clubs to which so many men retreated in so many books from the golden age of mysteries. Yes, we ladies were excluded, but the truth is I don't think in reality we'd actually want to be members.

The Diogenes Club (Mycroft Holmes' haunt) created by Arthur Conan Doyle was the first time I can remember hearing about such places and though I knew that the doors would always be closed to me, I couldn't help being fascinated from the first moment I learned about these dens of upper class male ritual. But as usual, I digress.

Back to the purpose: As with all of Innes' books one curious thing will very often lead to another even if at first the lead is tenuous and hairsbreadth thin and seems plucked out of thin air. Often it is a result of some heavy duty mental leap frog on Appleby's part and more often than not, the reader is not exactly privy to the step by step. SILENCE OBSERVED is no different.

'Simple persons, of unassuming colloquial speech, will sometimes be heard to remark that one damned thing leads to another. But policemen are only too happy when it does. A distinguishable sequence or concatenation between events is just what they are after.'

Those 'concatenations' will get you every time.

Later on the afternoon of the same event-filled day, Appleby has a conversation with another member of his club, Sir Gabriel Gulliver (Gulliver and Gribble, one can't help thinking that Innes has terrific fun with British names), a 'Director of an august national institution' who is also some sort of connection of Appleby's wife, Judith who, as it happens, is a sculptor.

"As a matter of fact," he said, [Gulliver] "it's about Rembrandt that I want to talk to you about."

Okay. Appleby is used to all sorts of esoteric ploys and gambits. And of course this conversation will also prove pertinent when a second murder occurs.

But it is the first murder most foul later that very same night when Appleby is called away from a small dinner party at his home - a dinner party where one of the guests has failed to show up - and urged to take a hand in the investigation (Appleby does little day to day police work anymore) by the same Sir Gulliver who had earlier been expounding a curious Rembrandt tale.

A reluctant Appleby shows up at the scene of the crime, a dark and dingy shop a few blocks from the British Museum. The murder victim is a collector and dealer of books, art and incunabula. Turns out that the murder is not only connected to information revealed by Sir Gabriel Gulliver, but also to Appleby's conversation much earlier in the day with Charles Gribble.

Appleby arrives at the moment when the body is still in situ and a frazzled police Inspector is trying to make heads or tails.

Appleby turned to Inspector Parker. "Just what is the situation, Parker, and what do we want to know?"

"Well, sir, Mr. Heffer [young man found at the scene] has some story about an old woman."

Appleby frowned. He plainly thought poorly of this as the beginning of an expository speech.

"Some story, Parker?" I don't think we can have that. It carries an implication of prevarication which isn't at all proper at this stage. I can see that Mr. Heffer is an irritating person - or at least that he is behaving in an irritating manner now. But irritated is just what we musn't get. So let's start again. "

This is the sort of thing that endears Appleby to me.

There aren't that many characters in this tale of murder, kidnapping and high level forgery but somehow, Innes manages to make you not instantly know who the killer or killers are and that to me, is a great magicians trick. There's also not a lot of exposition (except in the preliminary set-up conversations at the club) and things move along briskly to a rather exciting end.

I do have one quibble though (just to prove that even Innes hits a bump in the road now and again) and here it is: later in the tale, Appleby asks his wife to carry out an errand - something which I think should have rightly been done by a member of his staff, thereby involving her in the case and unknowingly putting her in danger. This seems off kilter to me but maybe I'm nit-picking. And besides, I never said that Appleby was a perfect all-knowing human being.

Other than that, this is one of Innes' more down to earth murder plots, totally lacking in phantasmagoria and the flights of fancy (well, except for the young woman who looks like a Botticelli Venus) the author was sometimes inclined to indulge in. Not that there's anything wrong with that.

SILENCE OBSERVED is a thoroughly enjoyable tale which should please art lovers and those inclined to want a little erudition tossed in with their dead bodies.

Since this is Friday, don't forget to check in at author Patti Abbott's blog, Pattinase, to see what other forgotten or overlooked books other bloggers are talking about today.