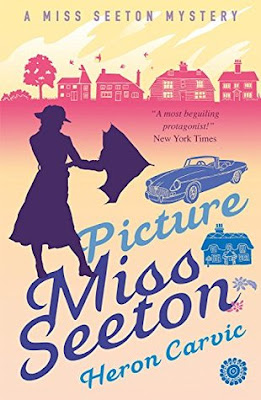 I had vaguely heard about this series over the years, but nothing that hardened itself in memory and besides, I had never seen the books in a bookstore or even, at the library. So imagine my surprise when Miss Seeton suddenly showed up in e-book form over at Amazon and at fairly cheap prices. How could I resist? I like the idea of fumbling old lady detectives if cleverly written AND with a humorous bent. (On this particular cover, you'll note that Miss Seeton doesn't appear particularly old but use your imagination.)

My suspicion is that Miss Seeton is meant to be a satirical swipe at the Miss Marples and Miss Silvers of this world and that’s okay by me. If you have an interesting take on old lady detectives and their Scotland Yard cohorts and you have a wicked sense of humor and some writing skill, then go to it.

Miss Seeton is an art teacher, semi-retired and recently moved to one of those small English villages full of crackpots…er, eccentrics. Her only weapons against the criminal element are her complete lack of street smarts, her obliviousness to what is actually happening and her trusty umbrella which she puts to good use when necessary.  She also has a bit of psychic ability (not overly pronounced) plus good visual memory and drawing ability, enough so that at some point in the series, she becomes a kind of unofficial sketch artist for the Yard. But again, I'm getting ahead of myself.

In this first book in the series, Miss Seeton has just inherited a small cottage out in the country and is looking forward to either selling it or retiring there. The story begins in London on the eve of her move as Miss Seeton wends her way home from the opera (‘Carmen’ by Bizet). Taking a wrong turn, she finds herself in a dark alley witness to a vicious murder she doesn’t recognize as murder until after she swats the killer with her umbrella and causes him to flee. Left behind is the body of a dead 'working' girl.

Since she glimpsed the killer's face and can sketch him, she becomes an invaluable witness for the police who immediately recognize the face in the drawing as a local bad guy.

Scotland Yard Superintendent Alan Delphic (known as 'the Oracle') and his sidekick, Sgt. Ranger, are both bemused by Miss Seeton’s naivete, not to mention the quick way in which she used her umbrella. But they realize that she will be in some danger until the murderer is caught, something that has not occurred to Miss Seeton.

However, since the killer knows he was seen, he is soon after Miss Seeton, undeterred by her move to the small of (in ). A village which will soon become a hub of strange doings much to the speculative delight of its denizens.

It is apparent that the police cannot keep track of Miss Seeton in her various wanderings nor can they, also apparently, seem to keep her safe. The press too is keenly interested in the battling spinster able to rout a murderer with her trusty umbrella. To all this, Miss Seeton displays complete bewilderment - she can't seem to grasp how her backstreet escapade might interest anyone.

However, she keeps stumbling over strange people in the dark and is even kidnapped at one point (with a sack thrown over her head) to the amazement of her neighbors who take malicious delight in inventing various reasons for all the nighttime activity.

Eventually it turns out that someone in Plummergen is connected with a ‘gang’ which specializes in getting people hooked on some insidious new drug. There is also a reckless bunch of young locals intent on mischief and a would-be hero equally intent on keeping his childhood friend from falling deeper into the clutches of the wrong crowd. Not to mention, the local mystery woman who writes children's books and seems not to notice that her daughter is pretty much a juvenile delinquent.

But is all this connected to the murder in which Miss Seeton witnessed? Yes and no.

The cops know who the killer is but catching him is another story. In the meantime, said killer keeps trying and failing (through no fault of his own) to get his hands on Miss Seeton.

Which leads to the biggest laugh I’ve had in a very long while: somewhere along the middle of the book there is a nighttime escapade involving a supposed auto accident, the death of a young woman who should have known better, the near drowning of Miss Seeton, the disrobing of a large police constable, several cars zipping back and forth through the village – one of them a police car, lights flashing, one an open sports car in which a titled lady and her son are driving hell bent for leather, first one way then another – one of the cars containing the near naked constable holding what looks like a body – all while several busybody villagers watch the comings and goings and invent the most hilarious stories to account for the night’s events. I laughed so hard I almost fell off my bed.

In addition, the ending will come as no surprise if you've paid any attention to the particular peculiarities of a large closet (wardrobe?) in Miss Seeton's cottage. Very funny and much in keeping with the general understated tone of the book. There's no one in the world who can do understated hilarity like the Brits.

I do recommend Miss Seeton in this season of political wretchedness when a good laugh is balm for the soul. I’ve since ordered the second book in the series, just to see if the first one was, perhaps, a fluke. Stay tuned.

Since this is Friday, don’t forget to check in at author Patricia Abbott's 'forgotten book' meme, this week being hosted by Todd Mason at his blog, Sweet Freedom. You will certainly want to see what other 'forgotten' or 'overlooked' books other bloggers are talking about today.
Posted by Yvette at 12:30 AM