Review: THE MEMORY OF BLOOD by Christopher Fowler 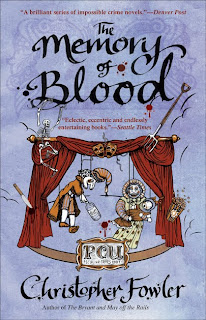 This is the ninth Peculiar Crimes Unit thriller by Christopher Fowler. The books' stars are, of course, Bryant and May, two old cop-codgers (way past retirement age) who run (metaphorically speaking) rings around the regular London constabulary - they are the chief investigators of the peculiarly named Peculiar Crimes Unit. Arthur Bryant is the older of the two and the scruffier - his clothing (most of it tweedy and of WWII era) is rarely without a noxious food stain or two and while moths don't actually fly out of his woolly worn out scarf, its probably because they're dozing after a good meal. Sartorially Bryant is a wreck.

Though the drastically under-funded Peculiar Crimes Unit is held in contempt by Scotland Yard - et al - Bryant is tolerated (barely) by 'officialdom' because he knows where certain skeletons are buried AND he is brilliant - the PCU's case record shows that much. Bryant's knowledge of London's colorful history, criminal and otherwise, is encyclopedic. With fiendish glee, he is able to use that knowledge, often running afar and afoul on tangents which make no sense to anyone but himself, to solve the bizarre murders which land on the PCU's dilapidated doorstep. (Renovations are in progress to fix up an old building - finally - for the PCU's official use.)

Bryan's partner John May, in appearance, is Bryan's exact opposite. Only a few years younger than Bryant, sartorially Bryant is splendid. May has given up bemoaning his partner's rag-tag appearance since obviously, after so many years, it all falls on deaf ears. Literally. Bryant conveniently and often will turn down his hearing aid. Bryant also has dentures, but the less said about that, the better.

May, a widower (or maybe he's long divorced), is a bit of an old skirt-chaser and currently has a girlfriend who is working temporarily in France - don't know whether they'll get back together - don't care. May is the perfect foil for Bryant's eccentricities even if he has given up trying to corral Bryant when the elder man runs off on that tangent I mentioned.

Bryant has NO social skills whatsoever and is often seen stomping all over a witness's (aka potential suspect) delicate sensibilities. It's then up to May to point out this fact to the unaware Bryant. Together they make a mighty fine pair of sleuths, though it's Bryant who does most of the sleuthing and May who does the necessary politicking. They are old friends, their relationship based on ancient mutual understandings and respect for each other's quirks.

The series' attraction, for me at least, is this whole idea that though the stories take place in modern day London, it might just as well be sixty years ago. Computers and gadgetry are used, but rarely by Bryant who has a habit of tucking his phone in a ratty pocket filled with melting caramels or other assorted foodstuffs. The descriptions, the shadowy settings, the whole darkly gothic aura of the series (including its two uniquely fashioned main characters) is old-school peculiar - that's what I love most about it. Author Christopher Fowler is also a horror writer, so perhaps the 'peculiarites' of these stories should come as no surprise. Though they did to me since I'd never read any other Fowler books.

These are most definitely NOT cozies, by the way. The crimes are bizarre and very often grisly. But Christopher Fowler is such a damn fine writer with such an inventive mind, I just follow where he leads even if most of the time, I have no clue.

The current case is especially daunting as it involves the 'locked room' murder of a child by, supposedly, a puppet. Set in the world of an odious powerfully rich man who collects Punch and Judy puppets and marionettes, the first murder occurs during a cocktail party in which all the suspects (of course) gather to celebrate the opening of a play currently being produced by said powerfully rich man.

We get to learn an awful lot of Punch and Judy historical minutiae by way of Bryant running amok hither and yon, trying to learn how the killer's mind works - I found this fascinating. Perhaps because I have a minutiae sort of mind. Who knew that Punch and Judy represent anarchy?

There is also, concurrently, another case involving the murder of a young woman who is transcribing Arthur Bryant's memoirs (in which he promises to divulge all), setting up the next book by leaving that particular denouement vague and open-ended. All we are left with there is the thought that in their next case Bryant and May will risk all. But don't they always? The PCU is usually on the verge of being shut down - if only they weren't so successful at catching killers.

Though this is not the best Bryant and May book, the killer's identity and the murderous 'how-to' seem a little too contrived even for a PCU case, it is still a worthy entry in a terrific series that I've read from the very beginning.

I suggest reading FULL DARK HOUSE (if you haven't), the first Bryant and May, which will set you up nicely for the rest. 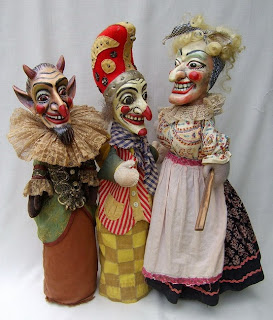