Remember these wonderful very vintage cartoons from Walt Disney? Well, even if you don't, they're 'oh so much fun' to watch (even for the first time) and can't help but bring a smile to your face. I love these clunky old animation techniques, seen in retrospect, they seem especially naive and full of joy.

I taught my daughter very early on the difference between good animation and not so good. (The difference, say, between the great old Tom and Jerry's from the 40's and the later versions for television which were unwatchable far as I'm concerned.) She caught on quickly. Of course by then we were watching cartoons on television. You may not be as particular as I was about my cartoon viewing, but we all have our little quirks.

Here's a youtube link to two Christmas cartoons from the early days.

These cartoons (well, maybe later ones from the late 40's and early 50's) were once the staple - ten at a time - between feature length movies at the local theater, while I was growing up in NY. Two movies, ten cartoons and as many Coming Attractions as you could stand - all for 25 cents. My friends, it never did get any better than that. 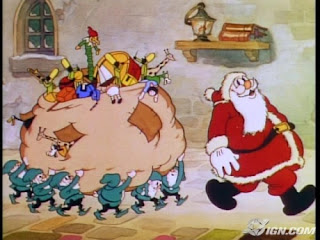 P.S. I hope to be watching these two cartoons with my granddaughter over Christmas.
Posted by Yvette at 1:00 PM