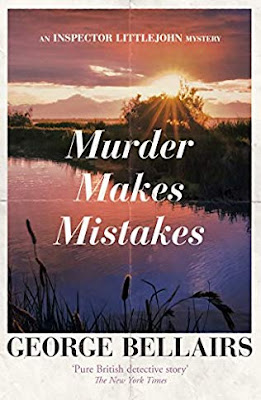 I know most of you are probably so over my George Bellairs fixation, but get a grip - I just have to talk about this one.

Yes, I'm still on my Bellairs kick and though a couple of the books here and there have been not so very good, the good more than outweighs the duds. Hey, the man wrote a lot of books - plenty to pick and choose from. No one hits it out of the park every single time.

MURDER MAKES MISTAKES is especially riveting since it involves the inexplicable shooting of Sergeant Cromwell, Scotland Yard Superintendent Littlejohn's assistant and good friend. Cromwell has been named an executor in his late uncle, Richard Twigg, and had been attending to family business in the small Cheshire village of Rushton Inferior. (Yes, there's also a Rushton Superior.)

When Mrs. Cromwell calls Littlejohn with the startling news, the Superintendent drops everything and rushes to help. Cromwell has been Littlejohn's crony over the course of many cases, many mysteries. As the Superintendent rushes north to see what he can do - in a still unofficial capacity - to help his old friend, he is torn by anger and grief. He can only hope for the very best as Cromwell is  operated on - results so far uncertain.

The details are these. Cromwell had been found lying on a village sidewalk in the dark of night, shot in the head by a small caliber pistol. No witnesses. No rhyme or reason. He was not working on a case, he was in the village on a personal family errand to attend his favorite uncle's funeral.

Of course everything is not as it first appears. Is it possible that Cromwell has inadvertently stumbled unto a mystery?

I love this sort of story where something utterly confounding happens and then slowly, everything unravels, bit by bit.  It helps too when the author is so adept at creating interesting characters, all with assorted quirks and secrets of their own. And the settings, ah, the settings - Bellairs is so darn good at getting all that right - the ambience, the colorful absurdities of village life. Plus he is equally good  writing women as well as men which always helps. In fact, his women are often more vivid than his men.

Once Littlejohn begins his inquiry into the attack on Cromwell, it becomes clear that there are other things amiss in the village of Rushton Inferior.

What is, at first, being investigated as a mysterious attack on an officer of the law then turns into a much broader inquiry involving all sorts of secrets past and present. An undiscovered murder is unearthed which leads, in turn, to a another murder and in the end, yet another. Blackmail, adultery, bigamy, suicide, murder most foul - all the sorts of things that keep life interesting in small English villages - well, at least in the ones I like to read about.

The 'grieving' widow - a much younger woman of course - of Cromwell's uncle is an intriguingly well created if enigmatic character - though not especially bright or in the first bloom of youth, she is still the sort of woman around which men buzz. I like how Bellairs makes her seem one thing and then another as Littlejohn bloodhounds his way into various village intrigues.

My favorite character is Cank, the grieving widow's sinister, creepy-crawly butler. CANK. Now there's a name to live in infamy. It suits the odious little wanker perfectly. Bellairs has a Dickensian thing for names now and again, another reason why I like his work.

MURDER MAKES MISTAKES is a terrific book with an ending in which several surprises are revealed just as you think you know everything. One of Bellairs' best, in my opinion.

And since it's Friday, once again don't forget to check in at author Patricia Abbott's blog, Pattinase, to see what other forgotten or overlooked books other bloggers are talking about.