Friday Forgotten (or Overlooked) Book: THE RIVER OF NO RETURN by Bee Ridgway 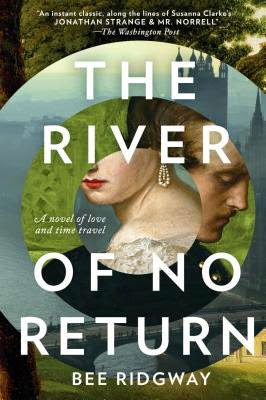 This a first novel by Bee Ridgway, as such, it  has its bumpy moments and bits of clunk, but on the whole works very nicely and is - dare I say it? - remarkably engrossing. At 452 ambitious pages, it still reads quickly and soon enough you're at the end and left wanting more. So I'm assuming this is the first in either a series or a trilogy. Only time will tell.

THE RIVER OF NO RETURN sports a fast-paced, enjoyably inventive plot: part time-travel opus. part Regency romance with the romance aspect being the least interesting. Why? Well, because the Regency aspects appeared to me to be a bit forced and lacking in 'oomph'. But then I'm currently listening to several Georgette Heyer - queen of Regency authors - audio books and it's difficult NOT to make some slight comparison which, of course, is totally unfair to Bee Ridgway, but life isn't always fair.

It is early days in the nineteenth century and the Most Honorable Nicholas Falcott, Marquess of Falcott - Lord Nick to his men - is just about to die under the heel of Napoleon's troops on the field of battle in the hills south of Salamanca, Spain. Brave Nicholas looks up to face his mortality in the form of a plunging saber when he is suddenly whisked away to 2003.

When he wakes up he is disconcerted to find himself in a white room with bright ceiling lights (well, what else?). It is explained to him that he has traveled forward in time and must now place himself in the hands of a cabal of time managers known as the Guild. He is also told the four rules under which he will live, now and for all time:

The Guild's explanation for this extraordinary event is kind of vague, but since they're willing to pay him an exorbitant yearly income to move to America (no 'traveler' is allowed to stay in their own country of birth) and, under a new name, live out his new life as he pleases. Nicholas sees no reason to challenge much of the nonsense he is being told despite his yearning dreams for a young woman he left behind in 1812. In fact, Nick's quick acceptance of all this is one of the book's slight faults, but what the heck, let's move forward. And after all, no matter how preposterous, it's better than being dead. Right?

But first Nick must attend a modern day indoctrination school which is situated in an isolated spot in the Peruvian Andes. Once there he meets other 'travelers' who have arrived from different eras, ready for indoctrination and whatever comes their way - though some are still befuddled and bewildered. Well, wouldn't you be? It is there that Nick's suspicions of the Guild are first awakened but then, rather pragmatically, he decides he might just as well go along to get along.

He settles nicely into a sybaritic life style in Vermont, enjoying dalliances with any willing and beautiful female who happens by, including the local cheese inspector who, lo and behold, turns out to be....wait, I'm getting ahead of myself, as usual.

Remember The Four Rules? Well, turns out that as with any rules of any import whatsoever, they were made to be broken.

And soon enough Nick is back in 1812 doing mysterious work for the Guild. He learns about 'the Ophans' who, according to the Guild are time renegades out to destroy the world by enabling the end of time itself. Of course they must be infiltrated and stopped at any cost.

But are they as black as they're painted - really? Or is the Guild merely guilty of pathological overreach? Who can Nick trust?

In the meantime, Julia, the girl Nick had been yearning for and who, coincidentally, was raised on a neighboring estate by a loving grandfather who, apparently kept one too many secrets, is added to the tumult of Nick's return to the past.

What is a poor Marquess to do?

Especially when it turns out that unknown to Nick, Julia has recently discovered that she has the ability to stop time in its tracks. A very intriguing talent to be sure.

Bee Ridgway loads her book with engaging characters, colorful settings and imaginative details, i.e. the cozy underground Ophan hideout situated beneath the streets of 19th century London and full of modern day quirks - fast food, an electric generator, etc - all unbeknownst to the Regency era citizens going about their business on the streets above. I admit this was my very favorite part of the book, perhaps because it was the most visually realized.

Except for a totally unnecessary sexual interlude which brings the story to a dead stop but which is easy enough to skim through - as I did - not to mention a bit of a flat ending, this is a definite Must Read for those of us who enjoy an imaginative time-travel tale, sumptuously told.

THE RIVER OF NO RETURN is not perfect, but it IS one of those - lately hard to find - books that the reader will get giddily lost in and that is definitely the highest praise I can give it.

(This review is a reworking of a post from a few years ago.)

P.S. Here it is several years later and I'm still waiting for a sequel. I can only assume that Bee Ridgway writes exceedingly slowly. But hopefully, soon, SOON!

This week we're back at author Patricia Abbott's blog, Pattinase, (welcome back, Patti!) checking out what other forgotten or overlooked books other bloggers are talking about today. Don't forget to go take a look.

Email ThisBlogThis!Share to TwitterShare to FacebookShare to Pinterest
Labels: Bee Ridgway, The River of No Return