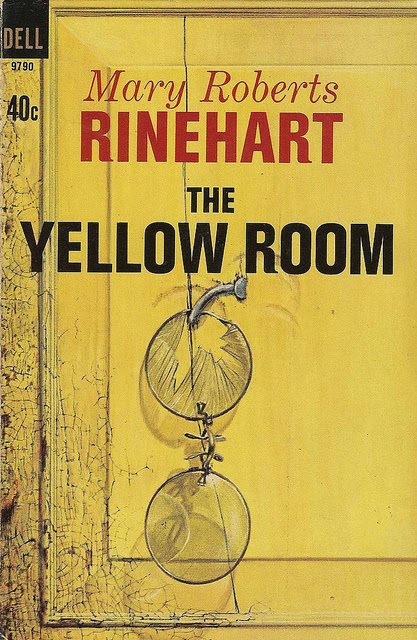 I remember reading this a few years ago and even more astounding, I vaguely remember having that great feeling of discovery you get when you come across a terrific book where, maybe, you'd only expected a moderately good one. I found THE YELLOW ROOM on one of my kitchen bookshelves tucked behind some other things and truth be known, as usually happens, I'd totally forgotten I had it at all.

I'm currently in the mood to reread this so this is a reworking of an old post from a few years ago. It's possible I may be on the verge of a Mary Roberts Rinehart reading binge. Side by side with George Bellairs. Hey, it's how we roll around here.

Mary Roberts Rinehart was chairman of the board of the 'had I but known' school of mystery writing but that doesn't make her work any the less intriguing. I love her stuff. Though, admittedly, she is an acquired taste.


Rinehart's heroines are of their time, the early 50's, late 40's and they can, occasionally, be a little hard to take, but even so I still enter eagerly into these mid-last-century misadventures. Most of her leading ladies in distress are wealthy or nearly so - in the days when being 'poor' meant having one servant as opposed to four or five, so maybe we have to work a little at empathizing with their various entanglements which often include long hidden family secrets, misguided love and murder most foul. That kind of thing.

These women were of a type and belonged to a certain 'sphere' which, back in the day, they were perfectly willing to remain in. Not that I have anything against nice, Waspy, wealthy young women looking to defy their mothers, fathers, aunts, cousins or guardians by marrying the wrong sort, Although Rinehart's heroines were also occasionally well-to-do middle-aged spinsters which was a nice touch. Truth is a lot of Rinehart's plots tend to be somewhat similar and nearly always involve a mysterious house in some way or other. But so what, murder in a nice big creepy house with unreliable electricity is, in some strange way which I cannot exactly explain, kind of comforting. Ha! Rinehart made a niche for herself and excelled at what she did.


Her best book, I think, was THE CIRCULAR STAIRCASE, which I've read several times over the years - and listened to on audio. (Her most famous book, I suppose, is THE BAT which was actually nothing more or less than a re-working of The Circular Staircase.) Though the actual protagonist in these two books is an older woman of the 'take no prisoners' variety who sets things in motion by deciding to rent a large summer house out in the country.  EPISODE OF THE WANDERING KNIFE with its odd title is another favorite Rinehart. But THE YELLOW ROOM is right up there in my top five.


Mary Roberts Rinehart wasn't the only one fashioning these sorts of talesThere was a certain type of woman writer working during this time - Mignon Eberhart was another, M.M. Kaye possibly (until she broke free with the splendid historical romantic adventure THE FAR PAVILIONS), who wrote pleasant women-in-peril books which contained mysteries, some of them first class, but always under the guise of good manners, country club outings, large summer houses or estates and stalwart young men, often with sun tans. These tales weren't meant, I don't think as anything more than pleasant diversions and sometimes I feel as if I should be wearing white gloves while reading them.


THE YELLOW ROOM concerns the 'opening' of a large summer house in Maine by people whose families have houses in Newport and New York. The heroine is Carol Spencer, a young woman of  means, though she declares herself poor when down to only a couple of reluctant servants to help with throwing back the dust covers at Crestview. (Houses with names, a tip that you're not in Kansas anymore.) But I think Carol is being 'ironic' when she says this, so I decided she was okay.


The story takes place near the end of WWII when shortages are everywhere and there are few men left in villages and towns to do any work. For instance there is only one cop left in town, the chief of police - when it comes to investigating crime. Rations exist and everyone knows someone who is in the armed services either stateside or overseas. Society is changing and Carol's mother is one of those who refuses to believe they won't be able to afford 6 or 7 servants, as in the past. Carol, at least, is pragmatic. Within the scope of her worldview, that is.


Thankfully, her charmless mother is left behind at Carol's sister's house, while Carol is sent up north (kind of like being exiled) to open Crestview, the silent house near the sea, merely on the off chance, it seems, that her brother Greg, a medal of honor winner, will be wanting to stay there for a few days before his coming marriage. (Greg is in the country temporarily to receive his medal in Washington.)


Once Carol arrives with three woebegone servants in tow - I loved the complaints about there being no porters at the train station and having to carry their own bags. They manage to get up to the house, arriving on a chilly, hostile and deserted night. Nights that always exist in these sorts of places in these sorts of books. That's why I like them.


The first thing Carol and her servants do at Crestview, is find the dead, partially burned body of a woman in a closet upstairs. And the fun begins.


From then on, it's any body's guess as to what happens next which is one of the more intriguing aspects of this story. The plot never seems to go where you think it's going to. There are more suspects than you can shake a stick at - Carol's brother, older sister and various neighbors including the father of Carol's fiance. Don Henderson, the fiance, is missing and presumed dead, his plane was shot down in the Pacific. The various relationships are developed nicely and you do get a good picture of this isolated Maine community peopled mostly with women, the elderly and one or two younger men who are there only for a short time and for particular reasons and must soon move on, back to war. That is, if murder stateside doesn't get in the way.


There is a love story thrown in for good measure, between Carol and one of the men staying nearby recuperating from a war wound. That he appears to do mysterious work for the government doesn't hurt the plot any.


I have to say I found it hard to put this book down, so I kind of read it in one fell swoop. A nice surprise, considering too that the book has been languishing on my shelves for years. (The ending is a bit convoluted, but I think that was probably the 'norm' at that time. I've read many mysteries from that era with convoluted endings which often leave me shaking my head. But it's not an intolerable thing.)


Yes, I think it might possibly be time for a Mary Roberts Rinehart marathon of sorts. We'll see how it goes.

In the meantime, don't forget to check in at Todd Mason's blog, Sweet Freedom, to see what other forgotten or overlooked books other bloggers are talking about today. Todd will be doing hosting duties while Patricia Abbott is away.