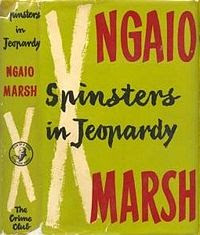 A preposterous book peopled with preposterous characters caught up in a preposterous plot, and yet Ngaio Marsh makes it all work. How is it that some authors can get away with stuff like this?

Agatha Christie did it all the time. Not to mention, John Dickson Carr and a few others whose names escape me at the moment. The height of preposterousness is T.H. White's DARKNESS AT PEMBERLEY, but damn if it doesn't work a treat and leave you wishing White had written more mysteries - many more.

(This is a fine-tuning of a post from five years ago as I seem to still be in the midst of my George Bellairs and romance novel kick about which I will not bore you unduly.)

SPINSTERS IN JEOPARDY begins with a well-known plot device: murder spotted from the window of a moving train. In this instance though, it's not some old lady looking on from her compartment, it's Chief Inspector Roderick Alleyn of the C.I.D. and his wife Troy (Agatha Troy, the famed British painter). They are traveling in France with their young son Ricky, on holiday. But in Alleyn's case, there's also a bit of police work on the side - a drug smuggling ring that needs to be dealt with.

This was all back in the day when people still used the term 'reefers' and it was thought that marijuana was almost as life destroying as heroin. Some of the terminology is very quaint, but the deadly implications of heroine can never be emphasized enough in my view - then and now. One of the main reasons, by the way, that I normally avoid books with drugs as a main theme is that it all seems so sordid, mindless and soul crushing. But I digress.

The overall setting of SPINSTERS IN JEOPARDY is the South of France, but the more immediate setting is the lazy little town of Rocqueville and the nearby dark and creepy Chateau de la Chevre D'Argent. (Chateau of the Silver Goat.) A very atmospheric place full of nooks, crannies and lingering dark shadows.

The Chateau is the home of a 'jet-set cult' at the heart of the dope smuggling business which Alleyn has been asked to investigate in tandem with the French police. The fact that his family is with him is meant as cover though to me it seems preposterous that Alleyn would connive in this way, allowing himself to believe that there is no specific danger to Troy and Ricky. But nobody's perfect.

I'm very fond of Alleyn and Troy, especially as a married couple and eventually as parents. They  have the sort of relationship any thinking woman might envy. They even have a small son who speaks as if he were a very proper little old man. As some of you might know, I am especially fond of precocious British children of the well-to-do variety (if written well). This little six year old is overly fond of using the words, 'lavish' and 'however.' Okay, I have to say I was charmed by the whole thing. Especially when Alleyn and his wife worry that maybe Ricky is just a tad too precociously inclined (their friends have remarked). All is done with the suave Alleyn touch, maybe that's why it works so well for me.

Moments after Alleyn and Troy have spotted the murder from a window, a fellow traveler aboard their train - an elderly British lady (Miss Truebody) traveling alone - is stricken with appendicitis. Alleyn and Troy, as fellow compatriots, feel they can't turn their backs on her. Coincidentally, the only doctor available is a certain Dr. Ali Baradi (a sweaty and oily sort reminding me very of much of Wilkie Collins' evil creation, Count Fosco) who resides at the Chateau. Coincidence!

Alleyn realizes that the murder glimpsed from the train took place in a room at that same sinister chateau. He proposes to leave his wife and son at the hotel in town while he insinuates himself into Baradi's group of restless ex-pats. And what better entry to the place than the poor, stricken Miss Truebody who lies on the brink on death unless Baradi performs an immediate operation. A bit cold-blooded, but when providence provides...

The Chateau de la Chevre D'Argent belongs to an effete 'poseur', an embarrassment of a man, the very wealthy egomaniac, Monsieur Oberon of indefinable nationality and pretensions of grandeur - the leader of the so-called cult. The sort of man who has begun to believe his own dangerous malarkey, yet a man not really as clever as he might, at first, appear.

The jaw-dropping activities which occur at the chateau on one Thursday night a month are hinted at (think pentagram), but mostly left to the imagination. Though we aren't spared the 'sight' of the repulsive Monsieur Oberon walking around in the buff. Drugs and sex go hand in hand, I suppose.

My favorite characters in the book, besides Alleyn, Troy and their son, are the young and terribly handsome Frenchman Raoul Milano, the Alleyn's indefatigable local driver, and Monsieur Dupont of the Surete, Acting Commisaire at the Prefecture, Rocqueville. I love how Dupont keeps calling Ricky, 'Ricketts' - so adorably French. I love how Raoul and Dupont join the hunt when 'Ricketts' disappears and the frantic mother and father must keep their heads while searching for their boy - Alleyn desperately trying to keep his real identity from the culprits up at the chateau.

We know who the bad guys are going in, no question. What we don't know is who was killed and why and who at the Chateau can be counted on to not interfere when the you-know-what hits the fan.

Besides that, there is the excellently written suspense of the disappearance and search for Ricky and near the end, an impersonation which comes out of the blue. Ngaio Marsh is expert at misdirection. There is also a brilliant scene at a local chemical factory when the righteous officialdom of the law comes up against egocentric criminal stubbornness. Just fabulous writing.

There is also a thumping good scene in which Raoul in all his glorious Frenchiness berates his weeping girlfriend (who works at the chateau as a maid and has been duped into taking part in the kidnapping). It's the sort of scene which only an experienced writer (sure of herself) can fashion. It surges into life in your imagination and you watch the thing with dismay and amusement. You can even hear the French accent of the rightly outraged beau. (He is speaking in French, but the author translates for our benefit.)

Alleyn, Raoul and Teresa sat on an ornamental garden seat in the factory grounds. Teresa wept and Raoul gave her cause to do so.

"Infamous girl," Raoul said, "to what sink of depravity have you retired? I think of your perfidy," he went on, "and I spit." He rose, retired a few paces, spat and returned.

"I compare your behavior," he continued, "to its disadvantage with that of Herod, the Anti-Christ who slit the throats of first-born innocents. Ricky is an innocent and also, Monsieur will correct me if I speak in error, a first-born. He is, moreover, the son of Monsieur, my employer, who, as you observe, can find no words to express his loathing of the fallen woman with whom he finds himself in occupation of this contaminated piece of garden furniture."

"Spare me," Teresa sobbed. "I can explain myself."

Raoul bent down in order to place his exquisite but distorted face close to hers. "Female ravisher of infants," he apostrophized. "Trafficker in unmentionable vices. Associate of perverts."

Well, as you can see, Raoul has a tendency to get carried away. It is a very enjoyable scene. Ngaio Marsh has Alleyn look askance at all this as if he's watching grand opera. And so do we. It's wonderful.

At any rate, all will be well. Teresa will be vindicated and the happy couple will be left at the end of the book, after a fabulous feast at the future in-laws' cafe, planning their wedding. And Alleyn will move on to his next intriguing case.

Ngaio Marsh is 'lavish' in her fabulousness, don't miss her books. Here's a link to my favorites.

It's Friday once again, so don't forget to check in at author Patricia Abbott's blog, Pattinase, to see what other forgotten or overlooked books other bloggers are talking about today.
Posted by Yvette at 12:30 AM